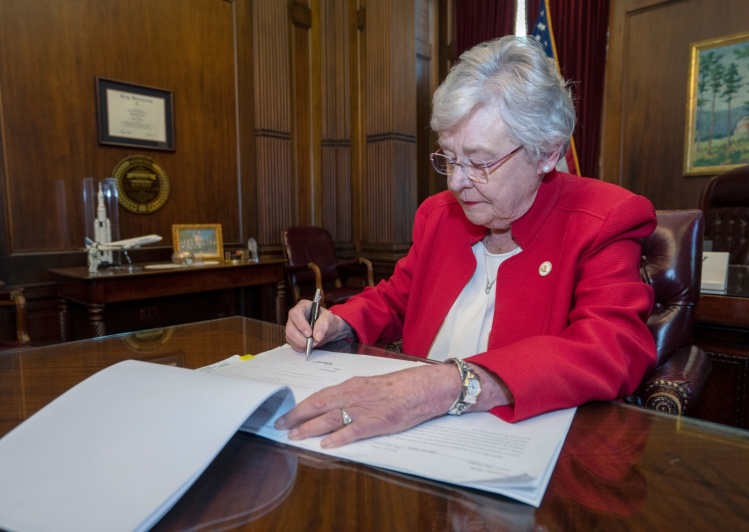 Alabama Gov. Kay Ivey signs into law a bill to ban abortion in nearly all cases at the state Capitol in Montgomery May 15, 2019 (CNS photo/Office of the Governor State of Alabama handout via Reuters)

It’s instructive that Alabama has handed the anti-abortion movement a great victory by passing the most restrictive ban in the country—and Republican politicians who regularly tout themselves as pro-life don’t like it.

Abortion is cast by its opponents as a “non-negotiable” question. Yet it turns out to be very negotiable and, indeed, a matter of “personal belief.”

Thus did House Minority Leader Kevin McCarthy, R-Calif., say he opposes the Alabama law because it “goes further than I believe” by failing to include exceptions for pregnancies caused by rape or incest. Republican National Committee Chairwoman Ronna McDaniel was right there with him. “Personally, I would have the exceptions,” McDaniel told CNN. “That’s my personal belief.”

Of course the Alabama abortion law is extreme. But you cannot fault the consistency of the Alabama legislators who supported it. If abortion is murder, it’s murder. I suppose you can have gradations on murder charges—first or second degree, say, or voluntary manslaughter—but that’s not the issue here. McCarthy and McDaniel can’t really think abortion is murder if they believe it’s OK some of the time.

Writing on the conservative website The Bulwark, Jonathan V. Last called the Alabama law “the most damaging development to the pro-life movement in decades.”

Wow! Why so? “If you want to end the abortion regime, you don’t get rid of it by outlawing abortion,” he explains. “There is a teaching effect to the law, but it’s not strong enough to support a law which does not have the consent of a large percentage of the citizenry. You get rid of abortion by moving public opinion. Which is hard. It’s incremental. It’s small steps.”

The dirty secret is that supposedly pro-life politicians support the exceptions because they poll well. But if your stand on abortion is based on a deep moral conviction, polling should have nothing to do with it.

Which is why I am among those—and I think there are a lot of us—who despise the way abortion is discussed in our politics. The issue has become a partisan cudgel, the subject of a lot of posturing involving self-interested calculation that rarely involves much respect for the ethical commitments of the opposing sides.

Whether the fetus is a human life from the moment of conception or a potential life, a human being is the result at the end of nine months of pregnancy. So it shouldn’t be hard for even the most pro-choice person to understand why those who oppose abortion believe as they do. At the same time, only women bear the physical burdens of pregnancy and society, as currently constituted, demands far more of mothers than fathers. So it should not be hard for even the most ardent pro-lifers to understand why women who advocate for abortion rights see control over their own reproduction as inextricably linked to gender equality.

But opponents of abortion must acknowledge this: Making abortion illegal doesn’t stop abortion. It does, however, make abortions unsafe for women who have them. A study by the Guttmacher Institute found that there were 22.3 million abortions between 2010 and 2014 in countries where abortion is highly restricted—and seventy-four per cent of those abortions were unsafe.

I share the right-to-life movement’s desire to reduce the number of abortions. But I also agree with the pro-choice movement that making abortion illegal or virtually impossible to obtain will only place women’s lives in jeopardy.

A better way forward would start by reducing the incidence of abortion through better family-planning programs. Even more important, we can give poor women who bring children into the world the help they need after giving birth.

The abortion rate is six times higher among poor women than affluent women. This is not because the rich have more moral qualms. The poor, unlike the wealthy, live with the fear that they will not be able to give their children the life they deserve. And we can honor the responsibilities mothers take on—in deeds not just words—by making the rules surrounding work more family-friendly.

The bottom line: If you truly want to defend the right to life, support women and lift up the poor.