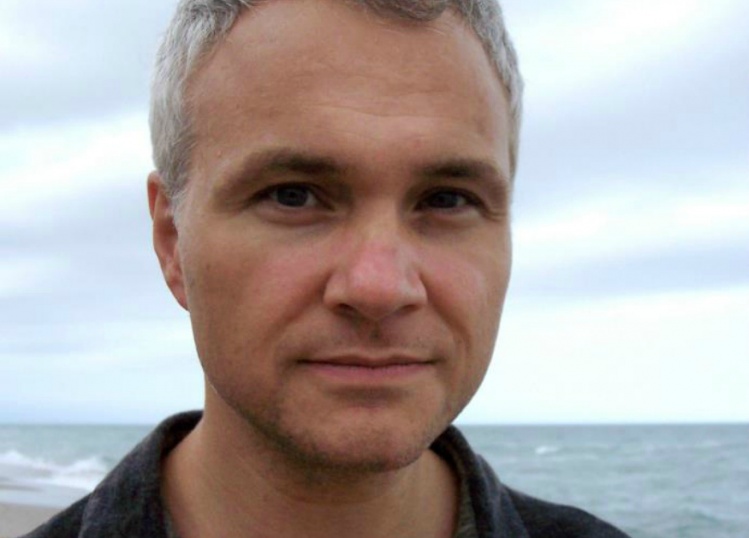 Nothing has changed. They have a welcome sign,
a hill with cows and a white house on top,
a mall and grocery store where people shop,
a diner where some people go to dine.
It is the same no matter where you go
and downtown you will find no big surprises.
Each fall the dew point falls until it rises.
White snow, green buds, green lawn, red leaves, white snow.

This is all right. This is their hope. And yet
though what you see is never what you get,
it does feel somehow changed from what it was.
Is it the people? Houses? Fields? The weather?
Is it the streets? Is it these things together?
Nothing here ever changes, till it does.

At first glance, this appears to be a perfect sonnet: an octave that describes a particular emotional or existential situation (nothing here has changed—not the landscape, not the houses, not the businesses, not the natural world), with a turn in the sestet that sees this situation anew (something ineffable has changed). Each line is crisply end-stopped and iambs predominate. Everything seems in order.

But when you look closer, you begin to realize the ways Mehigan deviates from perfect formal regularity. The opening stanza slightly differs from the expected Petrarchan rhyme scheme (abbaabba), using instead a brace octave occasionally employed by Yeats: abbacddc. Similarly, while all the other lines are in pentameter (five feet), Mehigan gives an extra syllable to the sixth, seventh, twelfth, and thirteenth lines. These lines are almost pentameter, but not quite. Another slight irregularity. Like the best poems, “Here” makes its argument not only by statement but also and especially by formal enactment: a poem about the change lurking beneath changelessness makes this change felt through the play of harmony and dissonance, structure and modulation. The town has “somehow changed”; the lines are somehow different from what we might have expected in a textbook sonnet. At the end of the poem, we realize that, though we might see order and sequence—first winter (white snow), then spring (green buds), then summer (green lawn), then fall (red leaves), then winter again—change remains ready to take us unawares. Is the poem’s unnamed change death? Simply time passing? We can’t be sure. All we can be certain of is that, as the poem’s most striking line puts it, “what you see is never what you get.”

"Here" serves as a perfect introduction to Accepting the Disaster, Mehigan’s second book of poetry, because it so powerfully exemplifies the rest of the collection’s stylistic strengths and thematic interests. Almost every poem here contains a striking formal moment, where Mehigan uses meter or rhyme or line break to do something surprising, and almost every poem concerns itself with time—how it passes and how we pass it, how it predictably wounds us and how it unpredictably ends us. “Work Song,” for instance, is a seemingly straightforward poem about blue-collar work, one of the collection’s recurring subjects. The opening stanza is mostly a series of blunt assertions:

This fastening, unfastening, and heaving--
this is our life. Whose life is it improving?
It topples some. Some others it will toughen.
Work is the safest way to fail, and often
the simplest way to love a son or daughter.
We come. We carp. We’re fired. We worry later.

Again, the poem’s excellence lies in Mehigan’s formal control. Look, for example, at his careful shifts in verb tense. The work that we perform, the “fastening, unfastening, and heaving,” is continuous, ongoing, seemingly unending. In the third line, work becomes the subject, and we see it do two things to workers: in the present tense, right now, it “topples some”; in the future tense, some time later, it “will toughen” others. This shift bears enormous weight. It can topple us at any moment, suddenly. If it toughens us, though, it will do so only after we’ve been at it a while.

By this point, we think we know where the poem is going: labor isn’t ennobling but enervating; management doesn’t care for “improving” the lives of its workers but only for toughening them, for making them less resistant and thus more productive. The fourth line appears a mere continuation of this line of thinking: “Work is the safest way to fail, and often”—this is the poem’s first moment of enjambment, and we believe that we can easily fill in the blank: and often / we do fail, or and often / it fails us. But the next line runs in an entirely different direction, making the sentence it completes something far more complicated: “Work is the safest way to fail, and often / the simplest way to love a son or daughter.” Work, then, isn’t just a way of being toppled or toughened. It’s a way of loving. We originally read the question in the second line—“Whose life is it improving?”—as rhetorical: it’s improving no one’s life, we confidently think. Now, we see that this might not be entirely true. “Work Song” is a poem about the exploitation of working-class labor, but isn’t just that.

This is one of the guiding arguments of Accepting the Disaster: things rarely are just the way we think they are. To return to “Here,” what you see isn’t what you get. Many of the poems in this collection are about looking at something once and then looking at it again, either from a different perspective or from a different, later time.

“The Smokestack,” for instance, consists of sixteen quatrains, each rhymed abcb and each describing the smokestack that dominates the skyline of a factory town. “It could look like Cuba / as seen from our space. / It could look like a pedestal stone. / It could look like Jesus’ face,” one stanza runs. Another reads, “Sometimes it looked like ermine, / sometimes like elderflower. / Sometimes it looked like a Persian cat, / and sometimes like power.” The poem reads like a contemporary, working-class rewriting of Wallace Stevens’s “Thirteen Ways of Looking at a Blackbird.” We are forced to see the smokestack through different lenses: through the lens of class relations, for example (“To labor it looked like a witness, / to management a snitch”), and through the lens of history (“It came before Lincoln Steffens. / It survived Eric Blair”), with the final stanza trying to capture the beauty and noxiousness of the American factory:

On cool summer evenings,
it billowed like azure silk.
On cold winter mornings,
it spread like spilled milk.

Another short poem, “The Crossroads,” looks at the site of a roadside fatality. Like “Here,” this poem explores the imperceptible and devastating nature of change:

Other poems—many others, in fact—examine the ultimate change, death. The late poet and critic Allen Grossman once wrote, “Poetry is the principle of power invoked by all of us against our vanishing.” But if we can use poetry to resist our vanishing, we can also use it to examine our vanishing, to stare directly at the death that awaits us all. Mehigan’s “Believe It” offers a terrifying vision of death’s nullity:

Hard to believe that, after all of it,
in bed for good now, knowing you haven’t done
one thing of any lasting benefit
or grasped how to be happy, or had fun,
you must surrender everything and pass
into a new condition that is not
night, or a country, or a sleep, or peace,
but nothing, ever, anymore, for you.

The final two lines, where Mehigan piles up comma after comma, force us to linger over all that death is not and all that it is: it’s not a night, not a country, not a sleep, not peace. It is, Mehigan tells us, just endless nothingness.

So what are we to do when faced with the inevitable prospect of death? How can we go on? One thing we can do, Mehigan suggests, is work. That’s why so many of his poems circle around labor: it’s what there is to do in the little time we have. Work is drudgery, but it’s also necessary. As “The Cement Plant” puts it, “None cheered it. It sustained them.” Another thing to do? Accept the disaster, as the collection’s title suggests, but also accept the rare moments of beauty that come with the disaster, those moments when industrial smoke “billow[s] like azure silk.” Accept the disaster, in other words, but also acknowledge the wonder.

That, it seems to me, is the argument of the collection’s final poem, “Shark’s Tooth.” In this poem, the speaker describes the wonder he felt at finding a shark’s tooth one evening on the beachside. Such a discovery resulted not from the speaker’s effort but from his cessation of effort. As he writes, “After three days of looking, and then not, / I stepped onto the sand, and there it was.” He tries to repeat the discovery but without success. All he can do is remember, and recreate for the reader, his finding the tooth “poised on a peak between the two child-sized footprints, / like a gift, or like bait, held out to me.”

Is such beauty a gift, or is it bait? Does it reorient us to a beautiful world’s mystery, or does it trick us into thinking that a malevolent world is other than it really is? Both, Mehigan tells us. The world is both gift and bait, beauty and terror, and Accepting the Disaster shows us both sides of the coin with fearless honesty.