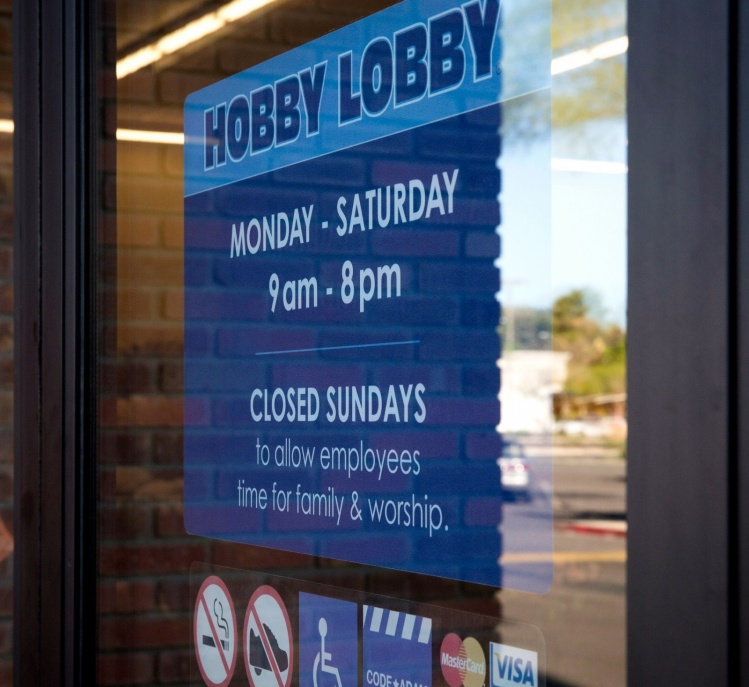 The owners of Hobby Lobby want you to know they take their moral commitments seriously. The Green family's stores don't sell shot glasses. They're closed on Sundays. They don't even allow their trucks to "back-haul" beer shipments. As supporter Ben Domenech pointed out, all those practices "could make them money, but they just bear the costs." The Greens are so serious about their Christian beliefs that they've made a federal case out of their objection to paying insurance premiums that would allow their employees to choose to receive contraceptive products that the Greens deem no different from abortion. "I doubt this is the type of company to spend one dime on this contraception mandate," Domenech wrote. "They will just drop coverage, and pay employees the difference...rather than compromise their beliefs." Except now it looks like they've been doing just that--for quite some time.

At Mother Jones, Molly Redden reports that Hobby Lobby's employee retirement plan "held more than $73 million in mutual funds with investments in companies that produce emergency contraceptive pills, intrauterine devices, and drugs commonly used in abortions." And Hobby Lobby makes significant matching contributions to the 401(k)--nearly $4 million in 2012, according to the company's 2013 disclosure to the Department of Labor. In other words, Hobby Lobby invests millions in companies that manufacture the very products they want to be exempt from covering in their employee health plans--products they believe cause abortions. As Redden notes, other holdings in Hobby Lobby's mutual funds include companies that make drugs used to induce abortion, drugs administered during abortion procedures, and insurers that cover surgical abortions.

This raises an obvious question: If the Greens are so committed to the belief that they cannot in good conscience pay health-insurance premiums that might result in employees using products that could prevent the implantation of fertilized eggs, then why are they OK with spending millions annually on companies that manufacture drugs that will certainly cause abortions? In other words, as Nick Baumann put it, "either remote cooperation with abortifacients is a red line for you or it's not."

Now, the Greens aren't Catholic, but their argument is essentially that they should not be made to cooperate in any way with the provision of contraceptive services they consider definitely or potentially abortifacient. That is, they cannot abide what Catholics would call remote material cooperation with evil (in this case, abortion). Of course, it's arguable that to the extent that they've been paying insurance companies that cover elective abortions--like the ones in which they invest on behalf of their employees--they are already remotely cooperating with what they consider evil. Because most insurers do cover elective abortion for some customers. But apparently that doesn't trouble them. What disturbs the family's conscience is paying for coverage that might end up preventing the implantation of a fertilized egg.

The problem for Hobby Lobby's argument is that investing in companies that manufacture drugs and devices that enable contraception and abortion is different from paying for insurance that enables an employee to choose whether to use services the Greens object to. Hobby Lobby selects the funds it invests in. As Redden points out, if the Greens wanted to, they could have chosen funds that screen out so-called sin stocks (they tend to perform as well as other funds). But they didn't. (Hobby Lobby's legal counsel, the Becket Fund, did not reply to requests for comment.)

Hobby Lobby's employee health insurance used to include the contraception services the Greens don't want to cover anymore. Obamacare did the Greens a favor by waking them up to the realities of the health-insurance market, so before filing suit they canceled coverage of the services they consider morally objectionable. But they seem have not been so scrupulous with their investments--and investments are a different animal. The cooperation is more direct.

Basically Hobby Lobby is saying to these fund managers: Here's our money. Make more of it for us doing what you do. From a moral-theological perspective, that brings Hobby Lobby significantly closer to the "evil" in question than would any premium payments that could allow employees to use contraceptive services. First, in the United States, benefits are considered part of an employee's compensation. Second, employees might not avail themselves of such services. Third, if the Greens decided to stop offering health coverage, employees would most likely end up buying plans that included contraception on the health-care exchanges. (Obamacare does not require any employers to cover drugs designed to induce abortion.)

What might last week's oral arguments have sounded like had this been reported earlier? Hard to say. But who would want to defend a plaintiff claiming that any role facilitating the use of potentially abortifacient drugs is inimical to its religious beliefs but who can't be bothered to figure out whether the millions it invests annually directly supports the production of drugs that always cause abortions? And if a justice or two starts wondering how sincerely Hobby Lobby holds the beliefs it says ought to exempt them from the law, who could blame them?