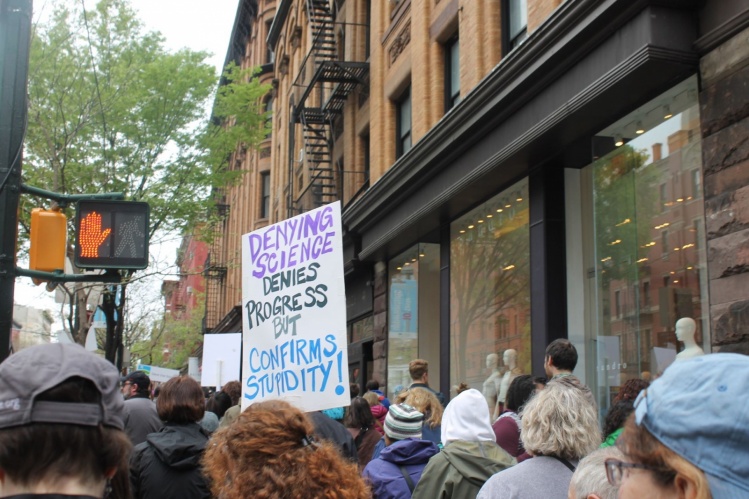 “The good thing about science is that it’s true whether or not you believe in it.”

So read numerous signs at New York City’s March for Science on April 22. The zinger from pop-science hero Neil DeGrasse Tyson was originally a response to creationist and climate-change-denying guests on Real Time with Bill Maher, but it has since become a rallying cry for self-proclaimed defenders of science.

Most signs at the march declared the importance of science to making decisions for the good of humanity against those who seem to claim the opposite. Targets and topics included Scott Pruitt, President Trump’s choice for EPA director, who denies that climate-change research is definitive; Trump’s removal of “terrible, job-killing” rules restricting pollution from coal mining; Trump’s attempt to weaken President Obama’s Clean Power Plan and so renege on the Paris Climate Agreement; and the potential defunding of the EPA by 30 percent.

So much of the preparation for the march was focused on recent political developments, and so much of it was overwhelmingly critical of Trump’s policies and those of other Republicans, that March for Science organizers released a statement claiming to be above the political fray: “We unite as a diverse, nonpartisan group to call for science that upholds the common good and for political leaders and policy makers to enact evidence based policies in the public interest…The application of science to policy is not a partisan issue.”

So what did the March for Science advocate? “A robustly funded and publicly communicated science as a pillar of human freedom and prosperity.” The organizers frame this as a nonpolitical, common-sense proposal: more money equals more science, and more science makes society better.

But given that so many chants, slogans, and signs amounted to calls to resist Trump’s agenda, it is curious to claim that support for scientific endeavors is apolitical. Marchers seemed to want to have it both ways: on the one hand, science supports a liberal political stance, and should be invoked to oppose conservatives who deny the existence of climate change or the need for government intervention to protect the environment; on the other, it is commonsensical, something everyone agrees on, that exists separate from political debates. As I overheard in one conversation, “Why can’t everyone agree? Science is literally just facts.”

Let me state plainly: I attended the March for Science because I do support federally funded scientific research, I agree that climate change is a real threat that should be dealt with through a collaboration of international agencies, and I believe that discoveries arrived at through the scientific method should be brought to bear on domestic and international policy. If one were to go through a checklist of policy questions, I expect I would land on the same side as most of the March for Science attendees. It’s with these concerns in mind that I fault them for two major problems in their thinking: about the nature of scientific investigation, and about the purposes of political life.

The first problem is that marchers assume anything labeled “science” is beyond criticism, or worse, that any critic of it must be “anti-science”: ignorant, bigoted, irrational, or a Luddite. (I saw more than one sign at the march calling for us to struggle against the Luddites who would impede “progress.”) Evolutionary biologist Richard Lewontin explained in his book Biology as Ideology:

We think science is objective. Science has brought us all kinds of good things. It has tremendously increased the production of food. It has increased our life expectancy from a mere 45 years at the beginning of the last century to over 70 in rich places like North America. It has put people on the moon and made it possible to sit at home and watch the world go by. At the same time, science, like other productive activities, like the state, the family, sport, is a social institution completely integrated into and influenced by the structure of all our other social institutions.

In other words, the scientific enterprise is not exempt from the influence of human institutions, opinions, or conflicts. The questions we ask, how we attempt to investigate them, and even the conclusions we come to are subject to sway of social, cultural, economic, and yes, political circumstances.

The scientific enterprise is not exempt from the influence of human institutions, opinions, or conflicts
sharetweet

In a Slate article written in the aftermath of the march, Jeremy Samuel Faust considered some of the most egregious examples. In an atmosphere where academics are required to “publish or perish,” failure to consistently produce relevant research is a career death sentence. This incentive to produce can lead to what Faust calls “statistical chicanery,” a manipulation of numbers to make a researcher’s data seem relevant or groundbreaking. Faust also points out the role of large pharmaceutical companies that have “learned how to game the science system so that their patented designer molecules can earn them billions of dollars, often treating made-up diseases...that we, the medical establishment, have literally helped create.” There are more nefarious cases, too. It is often pointed out that just a century ago, eugenics had the progressive stamp of “Science”; its theories underwent testing through the scientific method and were found valid. March for Science attendees would likely be opposed to manipulation of data, and certainly to the very idea of what eugenicists proposed. But in order to prevent future mistakes and injustices, it must be recognized that scientific investigation is subject to incentives and attitudes—whether that’s fear of losing a job, or the promise of profit, or overt racism.

The second misunderstanding is the relationship of science to policy. Science, strictly speaking, is less about the content of discoveries, or what we should do about them, and more about the method of inquiry: the process of developing hypotheses, devising and executing experiments, and rationally building on past discoveries to come to conclusions. But when the March for Science supporters were using the word “science,” they weren’t talking about this. They were referring to a set of policy prescriptions that they believe in.

The problem is that policy prescriptions are not inherent in scientific conclusions (which are, by definition, subject to constant scrutiny and revision). Say we all agree that climate change is occurring due to human activity; the evidence from all kinds of scientific studies points to the problem. What then? Do we establish caps on industrial pollution? Require curbside recycling in every county in the country? Ban cars? Direct 30 percent of the national budget to research? End the government’s role in funding research and let the market decide what questions should be answered? Arguably, all of these things could address the problem, but none of them is inherent in the conclusion that global warming exists. Moreover, who benefits from scientific discovery and experimentation? Who suffers? Scientific knowledge has been used to produce horrific weapons, justify colonialism, and find cures for diseases at the expense of minorities. Again, I am certain that March for Science attendees do not advocate these outcomes. It is a good, necessary thing to mobilize and fight for scientifically informed policy. But don’t make the mistake of calling that “science.”

When these twin mistakes are made, what are we left with? Self-congratulation and a pseudo-religious devotion to celebrities like Neil DeGrasse Tyson and Bill Nye. Faust elaborates, “Being ‘pro-science’ has become a bizarre cultural phenomenon in which liberals (and other members of the cultural elite) engage in public displays of self-reckoned intelligence as a kind of performance art, while demonstrating zero evidence to justify it.” Letting virtue-signaling do the work for us runs the ironic risk of justifying our political, religious, or economic opinions by claiming “science” told us to do it. At best, this produces confusion, division, and sloppy science; at worst, oppression, ignorance, and fear.

Despite all this, I am glad that I attended the March for Science. We need policy informed by scientific research, and we should ensure that scientists have the resources they need to produce this research. When these are threatened, as they do indeed seem to be today, it is a good thing to mobilize and protect the policies we deem good and useful. But science is a tool, not a program; a method, not a stance. And it is never adequate to insist, as Tyson does, that something called “science” is “true.” 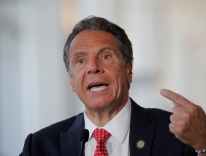 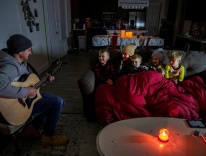