‘The Last Jedi’: A Fan’s Notes 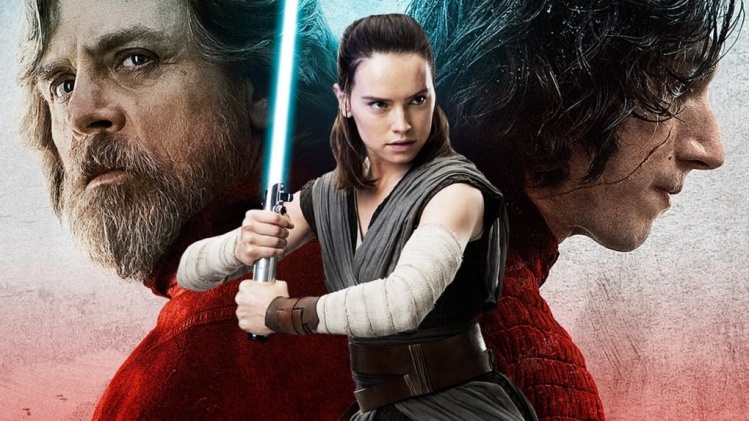 On December 19—opening night—I saw The Last Jedi, Episode VIII of the Star Wars saga. As both a cultural and commercial phenomenon the film has proved, well, pretty epic. By New Year’s Day, less than two weeks into its run, it had hit over a billion dollars at the box office worldwide, already quintupling its $200 million budget. When I sit in a theater on opening night at this kind of blockbuster movie, there’s something almost shiveringly sublime—unnerving, I mean—in the thought of so many millions of Americans doing the same thing at the same moment. Oh well. In our increasingly niched-out entertainment culture we tend to look longingly for culturally unifying events beyond the Super Bowl. So thanks, George Lucas.

There’s also nothing like opening night of a new Star Wars movie to sort the mere film critic from the true fan. In the sold-out theater (I had bought my ticket online, two weeks in advance!), the woman next to me was dressed as Princess Leia, in white gown and the double buns of the iconic original  hairdo. Darth Vader sat two rows back. I saw at least five white-plastic-clad clone soldiers. In the lobby afterward, clots of moviegoers avidly debated the film’s merits and the heated question of whether it fulfills or disappoints the legacy of the earlier films.

This robust discourse has continued in a tsunami of commentary online and in social media, where fans engage in Talmudic discussions of the most abstruse and tangential points of Star Warsiana. Disagreement over The Last Jedi has been fierce. (Divided opinion also held sway on the Connecticut public-radio show where I joined a panel discussion of the movie.) An article in the New York Times, titled “For ‘Last Jedi,’ Everyone’s a Critic,” noted the ecstatic review by the paper’s own critic, Manohla Dargis, even as it explored just how far from unanimous the fans themselves are—slugging it out over such issues as whether Luke Skywalker has become insufferably whiny in his dotage (“Luke Cavesulker,” the film critic David Edelstein wittily calls him in his own review), whether the issue of Rey’s parentage is sufficiently delineated, and whether the unceremonious dispensing with the new arch-villain Snoke reveals him as an epic red herring.

The Times invited fans onto a Facebook page, and quoted their responses. There were articulate naysayers:  “The script was a hot mess of lazy storytelling, absurd plot holes, recycled ideas, and lifeless characterizations,” said one. Another: “What I watched was a painful two-and-a-half hours of hyper-colloquialism, indecisiveness, and impulsivity.” But there were plenty of passionate yea-sayers as well, including one who recalled being fourteen in 1977 when the first film came out, and watching it twenty-one times (once a day) in its first three weeks. “The Last Jedi made me laugh,” the viewer commented. “It made me cry. It made me thrust my arms up in excitement.” And another (yea-sayer): “It had everything I could’ve wanted and more: A cast full of fleshed-out, kick-ass women; a relatable, tortured and believable villain; cute new aliens; a dash of that classic sci-fi cheese.”

In preparation for the new film, I watched, over the course of one equally dutiful and delightful week, all seven prior ones. I did so not in order of their release, but rather in the order of their place in the overall narrative. Remember, the first Star Wars, in 1977, turned out to be Episode IV, which Lucas followed with two sequels, The Empire Strikes Back (1980) and Return of the Jedi (1983). In the late ’90s and early 2000s, he made three prequels, followed by a ten-year hiatus, before picking up two years ago—ceding creative control to other writers and directors after the sale of Lucasfilm to Disney—with Episode VII, The Force Awakens. The Last Jedi is episode VIII, with the final film of this sequel trilogy, still untitled, slated for December 2019.

Each of the three trilogies has its own particular mojo. The original three movies were cuter than I had recalled, and sillier, especially in the humor surrounding those odd-couple droids, C-3PO and R2-D2; and all three were suffused with a Butch Cassidy and the Sundance Kid-like jauntiness that in retrospect seems very much a hallmark of a particular moment in American cinema. The subsequent prequel trilogy is a bit of a slog, performing a lot of biographical back-and-fill to tell the story of young Luke Skywalker and Darth Vader, even as it offers a primer in the rapidly expanding use of computer-generated images, so that even the slight time gap between The Phantom Menace in 1999, and Revenge of the Sith six years later, make them two entirely different achievements technically.

Relevance was never an important criterion, or even a welcome one, in an escapist adventure set long ago in a galaxy far, far away.
sharetweet

As for the first two efforts in the current sequel trilogy, we should note that it’s no longer George Lucas behind them, but other, much younger writer-directors. Both J. J. Abrams (born in 1966), who directed The Force Awakens, and now Rian Johnson (born in 1973) with The Last Jedi, were kids during the original trilogy’s run; it’s pleasing to see the franchise being given new life by talented acolyte-directors who grew up in thrall to it and are now carrying the torch, and the Force, forward.

What results is about what you’d expect: both significant continuity and significant departure. For my part, I’ll confess that Star Wars without Darth Vader is a bit like American Idol without Simon Cowell; I miss my villain, complete with James Earl Jones’s ominous basso profundo. With Adam Driver as the neo-Vader, Kylo Ren, exuding tormented ambivalence and self-pity, villainy gets reconfigured even more securely within a family-dynamic and therapeutic framework. It is less purely evil. Some fans find this a salutary development, something that makes the film more contemporary, more interesting, more relevant. But—for me at any rate—relevance was never an important criterion, or even a welcome one, in an escapist adventure set long ago in a galaxy far, far away.

That said, The Last Jedi—which is both written and directed by Johnson, whose nimble turn in the 2012 time-travel sci-fi thriller, Looper, helped establish his cred with alternate-universe genres—certainly doesn’t fail to entertain. It brings the visual power of the series to a new level, especially in the brilliant marshalling of Fascist iconography (one scene, in which the Empire’s General Hux addresses thousands of troops assembled in gigantic blocks of perfect lines, is straight out of Riefenstahl’s Triumph of the Will), and in the magnificent closing scene of battle, set in a salt desert where an underlying stratum of mineral-laden red dirt spurts blood-like crimson at every turn in the action.

The Last Jedi is also funnier, and in a new way. Sudden changes of register in the dialogue, from solemn to flippant, create a dimension of self-mockery that wasn’t there before. For instance, when a fire destroys the Jedi sacred books, Yoda comments that “page-turners they were not.” When General Hux is being given the runaround in a shaggy-dog radio transmission from the Resistance fighter pilot, Poe Dameron, the stratagem is pointed out in a slangy aside by one of his officers (“I think he’s tooling with you, sir”). In the closing battle, Luke suffers a seemingly annihilating barrage of firepower from Kylo Ren’s fleet; when the red dust subsides, he’s still standing there, and calmly brushes a mote off his shoulder.

As with just about everything else in The Last Jedi, these comic feints have polarized fans, some of whom find such moves disconcerting and incoherent (that “hyper-colloquialism” one complained about to the Times), as if Rian Johnson either failed to understand, or didn’t trust, or even willfully undermined, the fundamental earnestness of Star Wars. I think an argument can be made that the comic gesturing draws on, and makes explicit, the underlying contrast between the Rebellion/Resistance—with its slapdash brio, its dingy and broken-down equipment, and its jaunty humor—and the gleaming, perfect, orderly, and humorless fascism of the Empire. When the Fuehrer says, he is the master race, we Heil... Heil... right in the Fuhrer’s face! A habit of insolent and subversive humor was a cultural and characterological weapon that democracies wielded against Fascist pomposity and solemnity—Spike Jones vs. Wagner—and Star Wars both grasped and utilized this from the start.

Finally, and in keeping with notes not really on The Last Jedi as a movie, but as a phenomenon, I can’t help noting the impact that this otherworldly film has had on one of the most beautiful places in our world: Skellig Michael, the tiny island off the coast of southwest Ireland, whose isolated beauty and medieval monastic past made it the perfect setting for Luke Skywalker’s exile on planet Ahch-to. Treeless and steep, the rocky ruins of its long-ago cells and chapels perched on sheer precipices over the sea, the island for centuries remained a little-known destination for wayward visitors to marvel over; George Bernard Shaw, who visited it in 1910, called it “an incredible, impossible, mad place... the most fantastic and impossible rock in the world.”

Since its appearance in the last two Star Wars films, however, it has become famous; and the sheer size and weight of the fandom descending upon it poses something like an environmental hazard. The Irish Times reports a statement issued by An Taisce, Ireland’s oldest environmental NGO, warning that “the effective rebranding of the island as a Disneyesque theme site” threatens its UNESCO world heritage status with “unsustainable” levels of visitors.

My eleven-year-old daughter, meanwhile, has plastered her room with pictures of Porgs, the cute and curious little creatures, somewhere between owl and guinea pig, that populate Ahch-to. (They were created, Rian Johnson has explained, because doing so was easier than digitally expunging all the puffins on Skellig Michael.) Having just gone onto Amazon to buy my daughter a life-sized interactive action Porg for her upcoming birthday, I am now contributing to a branded product and spin-off industry that surely will generate many more hundreds of millions of dollars, thereby doing my bit to ensure the continued dominance of the Empire—the Lucas empire, that is.

I’m probably not doing Skellig Michael any favors, either. Oh well. Sometimes even a movie critic has to act like a fan.