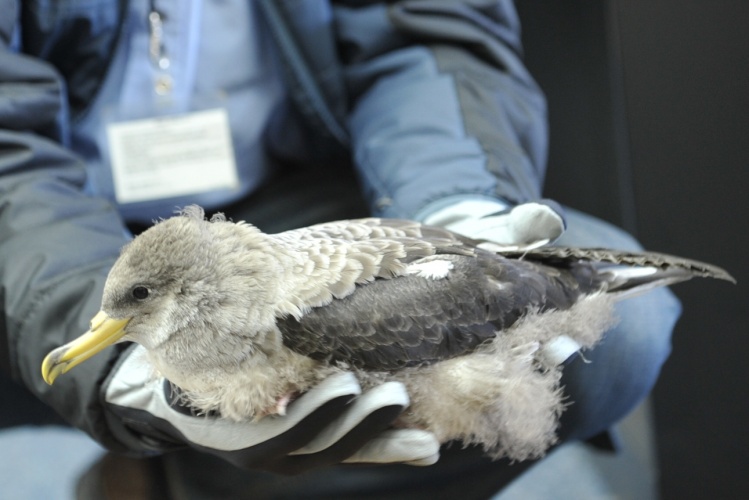 I am driving back from a retreat house near Gloucester, Massachusetts, when I see it. I think it’s the pin feathers that catch my attention, long and sleek and exposed by a twisted, broken wing. The wounded seagull is walking along the side of a busy highway, steps away from being a lump of feathers and blood. I inch my car forward and watch: the long flight feathers leave a streak in the sand as the seagull drags in the dirt a wing meant to fly.

My GPS has me arriving at Cape Cod in time to meet my friend. So I keep driving, hoping I’ll be able to forget the image of the lopsided seabird. I try pushing it away with rational thoughts: I’m not from here; I can’t help. What would my friend say if I showed up at the Cape with a bird in my lap?

But it’s no use. I’d spent much of the retreat praying with the image of Jesus as the Good Shepherd, carrying a lost sheep over his shoulders. And I have a fondness for birds. I shut off my GPS and turn around.

I try pushing the bird away with rational thoughts. But it’s no use.
sharetweet

Driving back along the road, I spot the wounded gull, limping along the silver guardrail. I put on my hazard lights and pull my car up so that I’m parked just behind it. I reach in the backseat for my pillow, shake the pillowcase free, and get out of my car.

“Come here, little seagull,” I say, dangling the pillowcase, hoping the gull will understand. The words have the opposite effect: the webbed feet bolt, making me wonder whether this bird is part roadrunner. I get back in my car to give chase.

A black Jeep pulls up, and the passenger rolls down her window. “You guys okay?”

She and the driver look around, then she yells, “We see it! We’ll pull ahead, and you stay behind.”

The black Jeep with Massachusetts tags drives past the gull and pulls into my lane. I position my own car just behind the bird. Hazard lights blinking, I jump out, trying to ignore the roar of highway traffic behind me.

Up ahead, the two women are rummaging through their open trunk. The driver grabs a beach towel. We form a triangle around the gull as it tries to lift its broken wing to fly away. It screeches in agony as the wing merely flops around.

The woman places the beach towel over the bird. It’s clear she knows exactly how to lift the moving bump without causing any pain. When the silent gull emerges, it is belly-up, chest feathers exposed, orange beak slightly open. I look down into the gull’s narrow yellow eyes. I can almost hear it saying, If only I had teeth.

“I know where to take it,” the woman says, holding the bird close. “I work with injured animals.”

I shake my head in disbelief at this small miracle. I reach out my hand and stroke the bird’s chest feathers. All I want is for it to fly again.

And as I stand on that busy highway, I feel a gentle but determined love—a love I don’t quite understand, one that made me turn around and chase after a wounded seagull with a pillowcase. Perhaps the Good Shepherd feels this same love—fanciful, almost nonsensical—as He chases after me.

I pull my finger away and watch as she cradles the injured gull with the towel. What was once lost has now been found, I think. I get back in my car, and continue on my way.

Carlene Joan Demiany is a graduate of Yale Divinity School and currently serves as an Assistant Chaplain at Saint Thomas More, the Catholic Chapel and Center at Yale University.