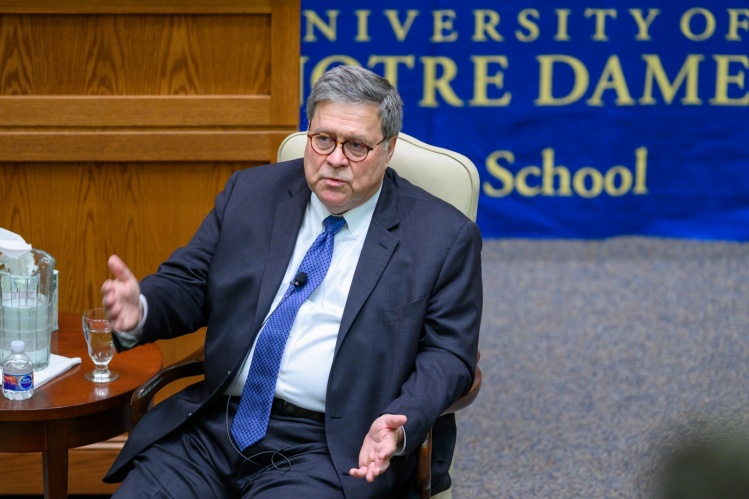 I finally got around to reading Attorney General William Barr’s Notre Dame speech concerning the threats now endangering religious freedom and marginalizing religious believers. I share Barr’s worries about the political and legal pressures being applied to religious organizations that profess traditional views about sexual morality, marriage, homosexuality, and transgenderism. The insistence of presidential candidate Beto O’Rourke that such groups be denied tax-exempt status is not only politically tone-deaf; it is also deeply illiberal. Democrats should reject such demagoguery. Freedom of religion or conscience means little if it does not protect the rights of those whose views we judge to be wrong. On this fraught issue, live-and-let-live should be the path forward. Better judgments on the value of the new sexual dispensation can be made in a generation or two. In a democracy, the sincere beliefs of people on both sides of such a complicated issue, especially one that implicates how families raise their children, deserve respect and tolerance.

But the bulk of Barr’s speech was a snide version of conservative Catholic boilerplate, designed not to persuade anyone but to flatter true believers and incite the troops. Barr claimed that “Christianity teaches a micro-morality. We transform the world by focusing on our own personal morality and transformation.” But this “micro-morality” has more to do with Republican Party orthodoxy than with the Gospel. So much for the long record of the church’s support for labor unions and a robust role for government in caring for the poor and promoting civic virtue. So much for Catholic social teaching, period. Barr seems to believe the church can tell you what is moral in the bedroom, but not in the workplace or the marketplace. Of course, it’s possible to be a Catholic and disagree with the church’s social teaching. But ignoring that teaching, as Barr did in his speech, is another matter.

Barr, a very rich man, contrasts his micro-morality to the actions of those misbegotten souls who “find salvation on the picket line” and “signal” their “finely tuned moral sensibilities by demonstrating for this cause or that.” He describes a recent experience in church, but smugly reassures his audience it did not occur in his parish. At the end of Mass, an announcement was made by the chairman of the Social Justice Committee about homelessness in Washington, D.C. The chairman reported on visits to the D.C. government to lobby for “higher taxes and more spending to fund mobile soup kitchens.” Barr suggests that this sort of political activity is virtually un-Christian. The orthodox Catholic solution, he argues, would have been to call for volunteers to staff the soup kitchens. Of course, volunteerism and individual responsibility for helping the poor do not negate the need for government action to address a problem as immediate, daunting, and complicated as homelessness. Barr disagrees. “The solution to the breakdown of the family is for the State to set itself up as the ersatz husband for single mothers and the ersatz father to their children,” he writes, caricaturing the views of those who advocate for government action. “Today—in the face of all the increasing pathologies—instead of addressing the underlying cause, we have the State in the role of Alleviator of Bad Consequences. We call on the State to mitigate the social costs of personal misconduct and irresponsibility…. The call comes for more and more social programs to deal with the wreckage. While we think we are solving problems we are underwriting them.”

Barr’s moral preening is almost surreal. But perhaps it is not surprising.
sharetweet

Barr paints a very dark picture of the moral “chaos,” much of it sexual, now sweeping across American society as religious morality is discarded for “licentiousness” and secular godlessness. If his speech is any indication, he sees no connection between societal disarray and economic inequality. No connection between the consumerist mentality that pervades society and fuels the economy and the inability of people to “put chains on their appetites.” No connection between the vaunted individualism of Americans and our abiding social animosities. Neither does Barr mention Jesus’ rather dark view of the moral corruption wealth causes. The eye of the needle is wide in Barr’s version of Catholicism. Trump Tower might even squeeze through it.

Coming from someone eager to advance the agenda of a president who is a model of licentiousness and moral chaos—a president who claims he has never asked God for forgiveness—Barr’s moral preening is almost surreal. But perhaps it is not surprising. Barr’s understanding of Christianity is essentially Pelagian; nowhere does his notion of “Judeo-Christian” morality reflect the paradoxical and decidedly “macro” teachings of Jesus. “Modern secularists dismiss this idea of morality as otherworldly superstition imposed by a kill-joy clergy. In fact, Judeo-Christian moral standards are the ultimate utilitarian rules for human conduct,” Barr argues. “Religion helps teach, train, and habituate people to want what is good…. In other words, religion helps frame moral culture within society that instills and reinforces moral discipline.” Describing the morality of Jesus as essentially utilitarian and this-worldly is like championing Trump as an avatar of democracy.

I had been to Mass the day I read Barr’s diatribe. The readings that day were piquant. In the Responsorial Psalm we were reminded that “the Lord hears the cry of the poor.” The first reading was from Sirach: “The Lord is a God of justice, who knows no favorites. Though not unduly partial toward the weak, yet he hears the cry of the oppressed. The Lord is not deaf to the wail of the orphan, nor to the widow when she pours out her complaint.” Mere virtue-signaling, one assumes. The passage from Luke’s Gospel was the story of the self-righteous Pharisee who praises his own virtue. His pride is contrasted to the humility of the tax collector who begged forgiveness for his sins: “I tell you, the latter went home justified, not the former; for whoever exalts himself will be humbled and the one who humbles himself will be exalted.” Whatever the truth of Barr’s speech, there was nothing humble about it.

In a remarkably prescient piece written in 1996 titled “Looking Backwards from the Year 2096,” the philosopher Richard Rorty speculated that America’s democratic institutions would break down in 2014 under the relentless demands of a globalized economy, ushering in an era of authoritarian rule. Rorty speculated that a new birth of democracy, one that embraced the relationship between “the moral order and the economic order,” would arrive in 2096. “Just as twentieth-century Americans had trouble imagining how their pre-Civil War ancestors could have stomached slavery, so we at the end of the twenty-first century have trouble imagining how our great grandparents could have legally permitted a CEO to get 20 times more than her lowest paid employees,” he foretells. “Such inequalities seem to us evident moral abominations, but the vast majority of our ancestors took them to be regrettable necessities.… Looking back, we think how easy it would have been for our great-grandfathers to have forestalled the social collapse that resulted from these economic pressures. They could have insisted that all classes had to confront the new global economy together.… They might have brought the country together by bringing back its old pride in fraternal ideals.” Fraternal ideals! Not very “micro,” but perhaps Judeo-Christian in the best sense.