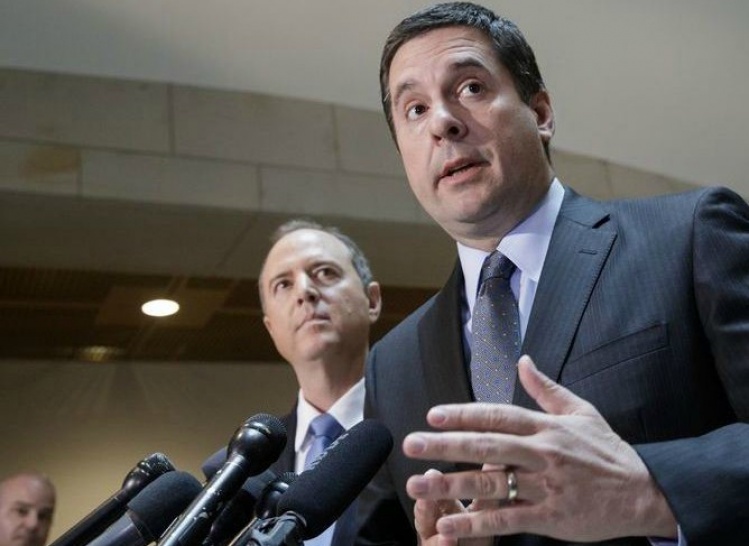 The memo that Republicans on the House Intelligence Committee released last week reads a lot like a motion to suppress evidence in an upcoming trial. It’s as much a piece of one-sided advocacy as any defense lawyer ever turned in.

It’s a motion before the Court of Public Opinion, which in the end will have a lot to say about how members of the House of Representatives vote on impeaching President Donald Trump, should it come to that. The release of this memo, orchestrated by Rep. Devin Nunes, makes it seem that it will.

That’s because the memo discloses that the Foreign Intelligence Surveillance Court renewed its initial order to snoop on former Trump campaign advisor Carter Page three times, each after a 90-day interval. The Justice Department would need to demonstrate that its surveillance was producing enough evidence to justify renewing the order—presumably, evidence that Page acted in behalf of Russia (which he denies).

Trump has contended time and again that there was no coordination between his campaign and the Russian authorities who, according to U.S. intelligence agencies, had tried to tilt the 2016 presidential election in his favor. The House Republicans are arguing through their memo that whatever evidence was gathered by snooping on Page—the memo is silent on that—is tainted. If no relevant evidence had been developed, the memo surely would have said so.

Still, the clear political motivation behind the memo’s release doesn’t mean it’s wrong to question the clubby world of the Foreign Intelligence Surveillance Court. The secrecy of the court, and the one-sided, ex parte nature of its proceedings have long raised concerns. The integrity of the system relies heavily on the good faith and credibility of its participants—who include members of the congressional oversight committees as well as high officials in the Justice Department, FBI and National Security Administration, and the chief justice of the Supreme Court, who selects the judges. That integrity is now broken as major players accuse one another in public of lying about what went on before the court.

The House Republicans’ memo appears to be highly selective in its choice of facts. Like any good defense lawyer’s memo, it looks to induce outrage over what may be the weakest part of the government’s submission, in this case the section on the “dossier” from the former British intelligent Christopher Steele.

Prosecutors are reluctant to volunteer evidence that undermines their case. Federal judges, who often started their careers as federal prosecutors, grant them a lot of leeway (but sometimes speak out in anger if they feel their trust was betrayed).

Why did it take the FBI so long to seek its court order?
sharetweet

If the Justice Department took advantage of that to cut corners on its application to the court—to conceal that Steele had gathered his intelligence while in the pay of Trump’s political opponents—that deserves to be exposed. But the House Republicans’ memo appears to be so selective in its choice of facts that it’s really not possible to reach any conclusion about whether that happened.

In fact, when it’s put into the context of what’s publicly known about the investigation into possible Trump connections with the Russians, it gives rise to another question: Why did it take the FBI so long to seek its court order?

We learn from the committee majority’s memo that investigators sought a court order to monitor Page, an energy consultant, on October 21, 2016. Exactly seven months earlier, on March 21, Trump had announced that Page was one of his five foreign policy advisors. Another was George Papadopoulos, who, according to court documents, had his first meeting in London on March 24, three days after Trump’s announcement, with a professor who was an intermediary for Russian intelligence authorities. In April, the professor told Papadopoulos that the Russians had “dirt” on Hillary Clinton in the form of “thousands of emails.”

In May, Papadopoulos told an Australian diplomat about the Russian “dirt” on Clinton, and then on June 12, Wikileaks founder Julian Assange gave an interview saying he had the Democrats’ emails, which he started releasing info in July as the Democratic National Convention began. That’s when the Australian authorities passed information about Papadopoulos to their American counterparts, leading to the start of the FBI probe in July, 2016, according to The New York Times.

After wrestling with how to handle such a politically sensitive situation, the Obama administration’s Department of Homeland Security and Office of the Director of National Intelligence issued a statement on October 7, 2016 saying that the U.S. intelligence community was confident that the Russian government was behind the leaking of emails from “U.S. political organizations.” It added that, “We believe, based on the scope and sensitivity of these efforts, that only Russia's senior-most officials could have authorized these activities.”

Page’s name had surfaced in a previous FBI investigation that resulted in charges against a Russian agent whom Page had met with in 2013. He traveled to Moscow in July, 2016 to give a speech. The Steele dossier alleged that Page met with the senior executive at the massive state-controlled energy company Rosneft, former KGB operative Igor Sechin, who was close to Vladimir Putin, and that they discussed possible energy deals based on the removal of sanctions the U.S. imposed after Russia invaded Crimea.

In testimony before Congress on November 2, 2017, Page denied ever meeting Sechin. But he acknowledged meeting another official in his company, Andrey Baranov, who headed investor relations at Rosneft, and said that no request was made to lift U.S. sanctions.

Page invoked his Fifth Amendment right against self-incrimination to refrain from handing over his emails to the congressional committee, so the panel isn’t positioned to say what happened. But, as Page noted, the FBI and other federal intelligence agencies already had all his records and they have “infinitely greater data processing capabilities than I do.”

In the end, we will hopefully see a report that breaks down the Russian interference in the 2016 election and the extent of any coordination with the Trump campaign—and with the same level of clinical detail that Ken Starr offered in his 1998 perjury and obstruction-of-justice findings against President Bill Clinton.

The current probe involves much weightier matters, and it may well face Congress with another grave decision. Trump has shown a propensity for deceit and, as Bill Clinton found, investigators are good at dissecting the lies commonly told in the political arena and finding where those lies intersect with criminal laws. For as Senator Mitch McConnell said in 1998 in voting in favor of the failed effort to convict Clinton, “if we have no truth and we have no justice, then we have no nation of laws. No public official, no President, no man or no woman is important enough to sacrifice the founding principles of our legal system.”