'Why the Right Went Wrong' 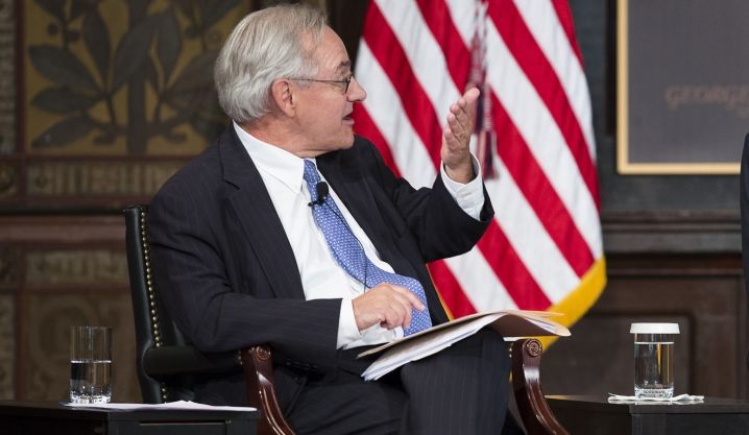 The history of the American conservative movement is usually written as a success story. Starting from the low tide of Lyndon Johnson’s 1964 rout of Barry Goldwater, the standard account follows the rise of conservative arguments and personalities to influence under Nixon, power under Reagan, and bipartisan respectability under the two Bushes. Over less than half a century, ideas that had been considered nutty passed into conventional wisdom. Erstwhile kooks became gray eminences of American politics.

In Why the Right Went Wrong, the veteran journalist E. J. Dionne Jr.  rejects this familiar narrative. Rather than a triumph, Dionne contends that “the history of contemporary American conservatism is a story of disappointment and betrayal.” In the decades that followed Goldwater’s defeat, conservatives won elections and established an unprecedented network of political, educational, and philanthropic institutions. But they never realized their basic promises: to reduce the size of government; to arrest the cultural transformations that followed World War II; and to secure prosperity for ordinary Americans.

Although he is a prominent progressive, Dionne’s diagnosis is remarkably similar to the internal critique of conservatism associated with the Tea Party movement. The difference lies in his prescription for a movement gone astray. According to Tea Party tribunes like Ted Cruz, conservatives must press on to total victory. Dionne, on the other hand, urges conservatives to rediscover the path of compromise and moderation blazed by Eisenhower.

Dionne’s argument relies on a kind of rhetorical misdirection. Intentionally or not, he combines expressions of sympathy for particular goals with the recommendation of tactics that prevent their achievement. Why the Right Went Wrong is not really an argument for conservatives to recover their principles. It is a case for abandoning those principles in favor of a very different style of politics.

One problem with Dionne’s argument is philosophical. Invoking Edmund Burke, Dionne identifies authentic conservatism as a cautious, prudential attitude. Without opposing all reform, this approach accepts change only when it is manifestly necessary. According to Dionne, “a healthy democratic order” needs this “skepticism about the grand plans we progressives sometimes offer, and its skepticism of those who believe that politics can remold human nature.”

There is much to be said for prudence, perhaps the most neglected of the virtues. But there is more to conservatism than hesitations about grand plans. Perhaps its most distinctive element is opposition to the centralization of coercive power and social welfare functions in the state. For conservatives, it matters whether we are moving in the right direction as well as how long it takes to get there.

This principle defines the American conservative movement. As Dionne shows in early chapters, the conservatives of the 1950s regarded Eisenhower’s acceptance of the New Deal as a shocking betrayal. In the lingo of the period, it was unprincipled “Toryism” rather than conservatism. The Goldwater campaign was built on this distinction.

So there is something curious about Dionne’s account of “true” conservatism. Rather than describing the working basis of conservatism in the United States since World War II, he appeals to theoretical abstractions that sound more like Michael Oakeshott than anything published in National Review.

It is true that voters never fully endorsed the conservative vision on the national level. Goldwater went down to crushing defeat (although it might have been closer if Kennedy had lived). Nixon, Reagan, and both Bushes were willing to abandon conservative dogma when it became a political liability. Although they appreciate the rhetoric of personal responsibility, it turns out that Americans cherish the reality of Social Security, Medicare, and subsidies for homeownership.

But it does not follow that there is a broad demand for an updated version of Eisenhower’s government-friendly “modern Republicanism.” Although they are perennial favorites among pundits, figures like Michael Bloomberg, Jon Huntsman, and Arnold Schwarzenegger have demonstrated little appeal to ordinary voters, at least as national candidates. Part of the problem is that the best way to get a reputation for moderation is by denouncing conservatives, while offering non-conservatives little that they could not get from Democrats. The remaining constituency is simply not large enough to win national elections.

In fact, moderate Republicanism never was as popular as Dionne suggests—even in its heyday. Eisenhower’s victory depended on his extraordinary personal prestige as much as his policies. Politicians who had not led the invasion of Western Europe had considerably more mixed records. Before Ike, Wilkie and Dewey failed to win the presidency on similar platforms. In the years that followed, eminent moderates such as Charles Percy and Mark Hatfield were never able to turn regional popularity into a national coalition.

Even at its apogee, then, modern Republicanism was extremely brittle. Seen as a commitment to moderation for its own sake, it was vulnerable to principled demands from the left that the state do much more as well as principled demands from the right that it do much less. Dionne’s observation that conservative politicians have been flexible in order to get and retain power is absolutely correct—and a valuable lesson for their self-appointed heirs. But he provides few reasons to think moderation is, in itself, a recipe for success.

THERE ARE CULTURAL and demographic reasons for moderation’s diminishing returns. Although it attracted various types of supporters, the political style Dionne praises was the ideology of a particular class: the property-owning, mostly Protestant Yankees and descendants of Northern European immigrants who dominated the midcentury Establishment. The values these men (and they were almost all men) professed—responsible management, personal integrity, and foreign policy internationalism—were not learned from books. They were elements of a broader culture.

That culture and the class that produced it were already embattled in the ’50s and are now thoroughly defunct. Even in its historic strongholds, Waspy restraint has been replaced by the synthesis of meritocratic ambition and personal non-judgmentalism that appeals to today’s professionals. Moderation, in other words, hasn’t merely gone out of fashion; it has lost the social base that made it viable as a political stance.

As the social base of old-fashioned moderation has died out, Republicans have relied increasingly on the support of working-class whites, especially in the South and the Rust Belt. These voters are not necessarily ideological conservatives. But their nationalism and anti-elitism make them an unreceptive audience for the sort of thoughtful, empirically grounded approach that Dionne proposes.

So it is not altogether surprising that Dionne’s hopes for a reformed conservatism have been Trumped over the past few months. It turns out that millions of Americans really were ready for a political alternative to movement conservatism. Rather than a second Eisenhower, however, the challenge comes from a loud-mouthed vulgarian who combines support for ostensibly earned benefits with denunciations of immigrants and criminals, and expressions of admiration for Vladimir Putin.

Dionne contends that the rise of Trump indicates the urgency of a return to moderation, before The Donald’s supporters are alienated from even the possibility of responsible guidance. It is more plausibly interpreted as a sign that Dionne’s argument is fundamentally misconceived.

The white working-class voters who are especially drawn to Trump do not seem overly concerned with questions about the purpose of the state or the structure of particular programs. Instead, they believe that they are being ignored or exploited by political, economic, and social elites—and they want a leader who will take on those elites. Trump’s slogan, after all, is not “beware: accelerating change ahead.” It is “Make America Great Again.”

Conservatives who want to win must find ways to connect with these voters without rejecting their basic principles. They need a constructive agenda that does more than repeat stale, ’80s-era slogans. That would be challenging at any time, but is particularly hard when the mediating institutions that once served as buffers between the individual and the state have almost completely unraveled. Discussions about how to do this should not be limited to true believers, and Dionne is to be praised for entering the debate. Even so, it’s doubtful that conservatives will find the guidance they need in this book.

Samuel Goldman is an assistant professor of political science and director of the Politics & Values Program at George Washington University.

Easy for Him to Say