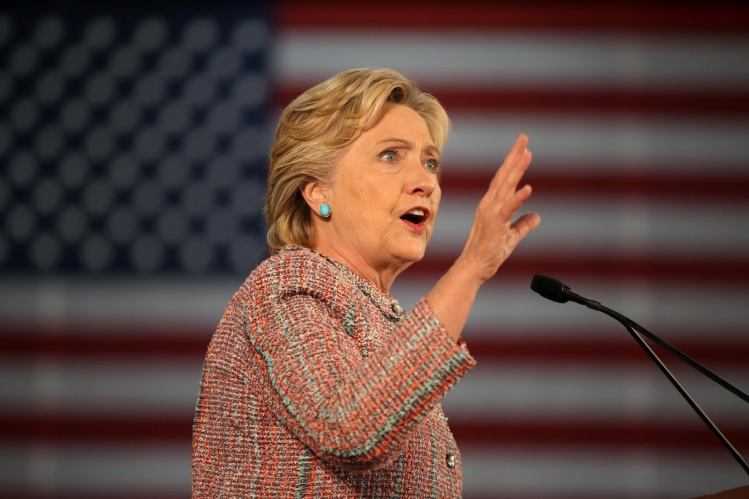 We had dinner guests not long ago, one of whom noticed my copy of What Happened atop a stack of books on the living room floor. This occasioned an interlude at table of what I can only call anti-Hillary venom, although every man and woman present had almost certainly voted for her. The book, in the view of my guests, was nothing more than an exercise in self-justification, in the course of which Hillary unfairly blamed Bernie for a loss that only her own deficiencies could explain. Why on earth was I reading it? None of our guests, it seems right to point out, had actually read the book in question. But that didn’t staunch the flow of passionate certainties, all of which centered on Hillary’s flaws as a candidate and even as a person.

That dinner party tempest haunted my subsequent reading. (I’d only been through the opening chapters when the exchange occurred.) Could the book help me understand the almost irrational hostility—irrational in the sense that these normally articulate people couldn’t really explain it—that many of my left-ish friends feel toward Hillary Clinton? Could the book, in the unlikely event that they read it, do anything to redeem her in their coldly skeptical eyes? The answer to both questions turned out to be “maybe.” What Happened does less to explain the left’s hostility to Hillary than complicate the question. And in order for skeptical readers to make their peace with Hillary’s campaign they will need to persevere to the book’s middle section, which I rather doubt many will do.

The book’s opening chapters introduce us to the personal Hillary—her recent political past, the decision to run in 2016, her adolescence and young adulthood. The narrative is amiably readable. Hers is the story of a particular cohort, which also happens to be mine: girls born to modestly prosperous parents in the early years of the baby boom. We got the college educations many of our parents lacked and often, thanks to the women’s movement, jobs of the sort that our mothers could only dream about. “I came along at just the right moment,” she quite accurately tells us, “like a surfer catching the perfect wave. Everything I am, everything I’ve done, so much of what I stand for flows from that happy accident of fate.” Coming of age at a time of social upheaval, young women like Hillary prospered, which presumably helps to explain the murky resentments stirred in 2016 by her candidacy. “Lock her up” for what? Perhaps for having embarked on success at precisely the moment when men’s fortunes began to falter, when their earning power began to erode, and their educational attainment to slip below that of their sisters.

Despite their engaging qualities, these early chapters too often read as if a politically minded editor were ultimately in charge. (The book was in fact written in collaboration with several of her staffers.) I didn’t so much doubt the sincerity of the narrative as feel irritation at details transparently designed to make this exceptional woman seem just like the gal next door. Conflict is oddly missing, too, although political campaigns and indeed political families are notoriously fractious entities. But that’s just to say that this is a politician’s book. Why should Hillary be obliged to dissect the emotional dynamics of her marriage or publicize her reputedly short temper with subordinates? No one expects male politicians to do anything remotely similar. For Hillary-skeptics, however, I fear that these mild evasions will confirm their belief, however misplaced, in her dishonesty. They will probably stop reading before they get to the good part.

Losers always blame the press, or so the common wisdom goes.
sharetweet

What “good part” comes mostly in the book’s middle chapters, where Clinton trains her politician’s eye on the 2016 campaign. Her brief but pointed criticism of the Sanders crusade—the thing that so agitated my dinner guests—is a bit unfair but fundamentally persuasive. It is in fact true that Sanders was short, almost scandalously so, on policy specifics. “That left me to play the unenviable role of spoilsport schoolmarm,” she notes ruefully, “pointing out that there was no way Bernie could keep his promises or deliver real results.” It’s also true that his attacks on Clinton, some of which were ugly, helped to tarnish her image with voters, especially those already distrustful of politics and establishment politicians. Might this have made a difference in a state like Michigan, which Sanders carried at primary time and where Trump’s margin of victory was razor-thin? She does not say so, although the suggestion is there. But Clinton does not blame Sanders for her loss, as my dinner guests seemed to believe. The real villains, as she tells it, were the press, the Russians, and former FBI director James B. Comey.

Losers always blame the press, or so the common wisdom goes. Clinton, moreover, has long had, by her own admission, an unusually adversarial relationship with the news media. Still, her pages on campaign press coverage make for sobering reading. Apparently desperate to project an aura of even-handedness, even reputable news outlets hammered away at Hillary’s perceived sins—her private email server loomed large—to “balance” their coverage of Donald Trump’s successive outrages. Fearing competition from partisan online sources, those same news venues focused heavily on personality—wonk-ish Hillary was found to be wanting—rather than policy. Nor did outlets hitherto renowned for their investigative reporting pay adequate attention to growing evidence of Russian meddling in the campaign, which we now know to have been extensive and perhaps even decisive. But the media gave prodigious attention to James Comey’s announcement, in the final days of the campaign, that new emails had surfaced that might be related to the FBI’s now-closed investigation into Clinton’s use of a private server. As Clinton tells it—and she deploys some formidable data from Nate Silver and others in support—Comey’s intervention tipped a race that had grown unexpectedly close.

None of what Clinton says on these subjects is new. But her account is nonetheless powerful, if only because it pulls together a welter of disturbing facts we have hitherto absorbed piecemeal. She is right, moreover, that these developments—especially Russian intervention and the hyper-partisan divisions it attempted to exploit—threaten the future of our democracy. But does Clinton herself not bear some responsibility for her defeat? She is, after all, hardly a natural-born campaigner. As for winning the popular vote and losing the Electoral College—well, that suggests, to put it politely, serious miscalculation on the part of a campaign’s strategists. Clinton defends her campaign’s choices, pointing out that the polling on which they were based deceived nearly every political expert. She notes the political headwinds against her—the reluctance of voters in recent decades to give the White House to a single party for more than two consecutive terms, Republican hyper-partisanship (most of the “never-Trumps” came home, while Democratic turnout declined), the 2013 Supreme Court decision that gutted the Voting Rights Act and spurred legal efforts at voter suppression in a number of states. But she also acknowledges—and this should please my dinner guests—that a great many people just don’t like her.

So perhaps it was mostly Hillary’s fault. It’s worth asking, though, whether Hillary’s principal flaw wasn’t simply being female. “Whenever I do a job, such as senator or secretary of state,” she writes, “people give me high ratings. But when I compete for a job—by running for office—everything changes.” The numbers bear her out. Do they speak to misogyny pure and simple? Not in the least. Women now serve routinely in high government positions, many of them elective. It was not so in my childhood. But a woman competing to fill the nation’s highest office—Clinton is referring, I think, to her two failed presidential bids—seemed to elicit emotions rooted in an earlier era. Why did Hillary prompt such rage? Why did so many otherwise sane Americans entertain the notion that she might be guilty of unnamed but horrific crimes? Forgive me for thinking that the answer has a lot to do with gender.

As to my dinner guests, stand-ins for a left that never embraced the Clinton candidacy, I have no neat explanation. In terms of her policies and political instincts, Hillary resembles Obama, for whom my friends retain a bemused affection. Maybe she’s just less likeable. Or maybe the roots of her problems go deeper, even on the left. “Likeability” describes something real but it doesn’t float free of gendered expectations.