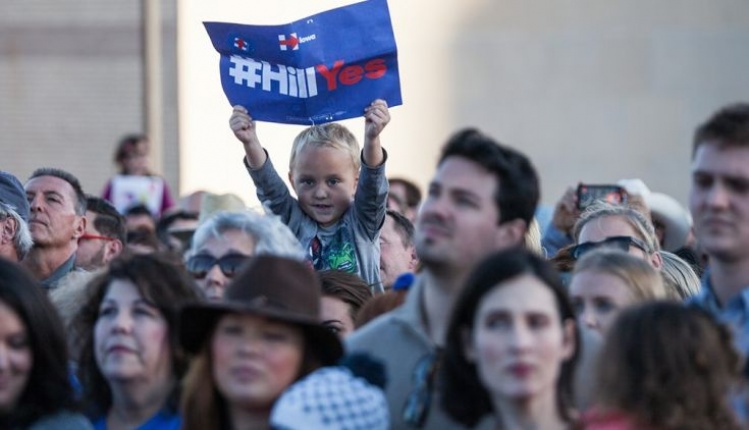 Which political party loves America? Not the United States that once existed, but the flesh-and-blood nation that we all live in now.

The debates we have witnessed—too few and far between for the Democrats, frequent enough for the Republicans to constitute a new reality TV show—have provided an incontestable answer to that question.

The Democrats embrace the United States of Now in all of its raucous diversity.

Democrats are not free of nostalgia. They long for the more economically equal America of decades ago and celebrate liberalism’s heydays during the New Deal and civil rights years.

But Hillary Clinton, Bernie Sanders, and Martin O’Malley all stand up for the rights of a younger America—today’s country—that is less white, more Latino and Asian (and, yes, more Muslim) than was the U.S. of the past. The cultural changes that have reshaped us are welcomed as part of our historical trajectory toward justice and inclusion.

The Republicans, particularly Donald Trump and Ted Cruz, don’t like our country right now. They yearn for the United States of Then. The current version is cast as a fallen nation.

True, the party shut out of the White House always assails the incumbent. But a deeper unease and even rage characterize the response of many in the GOP ranks to what the country has become. This can cross into a loathing that Trump exploits by promising to deport 11 million undocumented immigrants and block Muslims from entering the country while dismissing dissent from his program of demographic reconstruction as nothing more than “political correctness.”

I am certain that in their hearts, every candidate in both parties still likes to see us as “a shining city on a hill” and “the last best hope of earth.” Within the GOP, Marco Rubio and Jeb Bush have been especially careful not to abandon the virtue of hope and any confidence in the present. But this makes them stronger as general-election candidates than within their own party.

The stark cross-party contrast complicates any assessment of Saturday’s Democratic debate. As Clinton, Sanders, and O’Malley all made clear, each believes their own disputes are minor in light of the chasm that has opened between themselves and the Republicans.

“On our worst day, I think we have a lot more to offer the American people than the right-wing extremists,” Sanders declared at the debate’s end. O’Malley concluded similarly: “When you listened to the Republican debate the other night, you heard a lot of anger and a lot of fear. Well, they can have their anger and they can have their fear, but anger and fear never built America.”

Democratic solidarity was Clinton’s friend. She emerged stronger simply because neither of her foes made a clear case for upending the campaign’s existing order. Her own solid performance will reinforce those who already support her.

But two big quarrels between Clinton and Sanders are important to the Democrats’ future. By pledging to avoid any hike in taxes on those earning less than $250,000 a year, Clinton strengthened herself for her likely fall encounter with the other side. But Sanders deserves credit for speaking a truth progressives will need to face up to (and that social democrats in other countries have already confronted): that the programs liberals support are, in the long run, likely to require more broadly based tax increases.

On foreign policy, Clinton continued to be the more openly interventionist candidate. Here again, Clinton likely positioned herself well for the long run. But Sanders may yet capitalize on his comparative dovishness with the generally peace-minded Democratic caucus electorate in Iowa.

Each also offered revealing one-liners as to whether “corporate America” would love them. Clinton nicely deflected the question by saying, “Everybody should.” But Sanders was unequivocal. “No, they won’t,” he replied with starchy conviction.

Above all, this debate should embarrass the Democratic National Committee for scheduling so few of them, and for shoving some into absurdly inconvenient time slots that confined their audiences to political hobbyists.

Debates are a form of propaganda in the neutral sense of the word: They are occasions for parties to make their respective arguments. Given that the divide between the parties this year is so fundamental, it’s shameful that Democrats did not try to make their case to as many Americans as possible.

If you have faith in your response to anger and fear, you should be ready to bear witness before the largest congregation you can assemble.