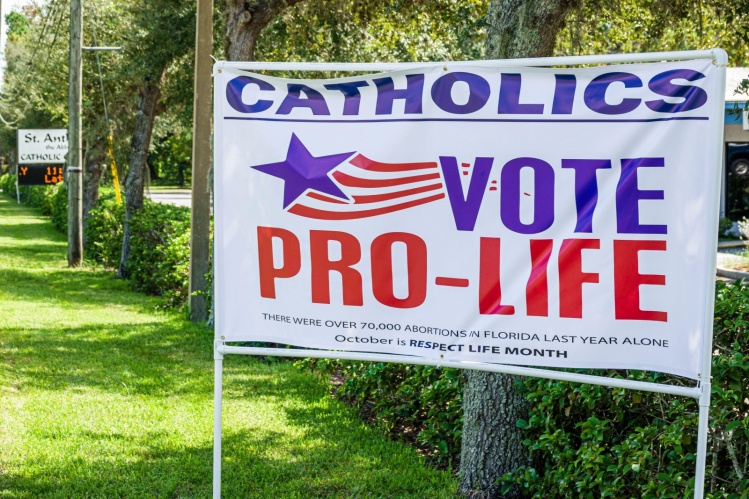 Like most Catholics in the post–Roe v. Wade generation, I grew up hearing very little about miscarriages and a great deal about abortion. I thought I knew what abortion meant: abortion is murder; abortion stops a beating heart; abortion is a mortal sin. I did not know that, in medical terms, a miscarriage is a “spontaneous abortion.” When my first pregnancy ended, I was stunned to see the word “abortion” in my medical file. There I was, a woman who would never consider “having an abortion,” and yet somehow, very much in spite of myself, I already had.

If you bring up the matter of medical terminology in a debate about abortion restrictions, you may be accused of muddying the waters with semantics. Pro-lifers will tell you that of course they know the difference between abortion and natural pregnancy loss. But where the moral difference between choosing to end a life and suffering an unintended loss may be clear, the practical, legal, and medical realities overlap in complicated ways. I have learned over the course of six pregnancies and four births how inadequate pro-life rhetoric can be, and how lonely it is to find yourself in a place beyond the reach of slogans like “Choose life!” The awful irony of restrictions on abortion is the way they put up barriers to basic health care, barriers that can be dangerous for women whose experience of pregnancy is not a smooth path to motherhood.

I have learned over the course of six pregnancies and four births how inadequate pro-life rhetoric can be.
sharetweet

My sixth pregnancy, like my first, ended in a miscarriage—a fact I learned from an ultrasound exam, which classified the loss as a “missed abortion.” Three weeks later I was in the emergency room seeking treatment for what is known as an “incomplete abortion.” By that time, seeing the word “abortion” in my records no longer frightened me, but the reality very much did. I was admitted to the hospital with heavy bleeding, and ultimately I underwent a D&C, which activists can tell you is a procedure used to terminate a pregnancy. In my case, it was necessary to stop the hemorrhage that had sent me into shock.

Morally, my situation was straightforward. Medically, it was a crisis requiring immediate intervention. And legally, in New York, nothing prevented me from getting the care that saved my life. But when I woke up in the maternity ward, thinking over the traumatic events of that night, I wondered whether a woman in my situation in a state with restrictive abortion laws would have been so fortunate. My survival depended on the availability of a doctor who was able and willing to perform an abortion procedure. It is not hard to imagine the situation turning out differently in a state with more “pro-life” laws regulating care. What if that doctor hadn’t been trained? What if she was afraid to get involved? What if someone else needed to approve the procedure before the hospital could carry it out? What if I ran out of time?

I don’t think it occurs to most pro-life voters that the same procedures that can end a growing pregnancy can also save a life, and that enacting restrictions on abortion could mean withholding care from mothers whose lives are in danger. Appealing to “the health of the mother” is not just a pro-choice dodge, as many pro-lifers would have you believe. As a mother and as a woman, I am chilled by the heartlessness of slogans like “Pregnancy is not a disease,” which the U.S. bishops conference relied on in 2011 in opposing mandated coverage for birth control. I know better than any bishop what it’s like to bring life into the world. And I know pregnancy doesn’t always end in a blessing. I didn’t end up in the ER because I failed to appreciate the inestimable gift of life. I ended up there because a natural complication of pregnancy nearly killed me. That fact, and the fact that birth control is the obvious way to prevent a repeat of that experience, is inconvenient for the Catholic pro-life position. It gets brushed aside, and women like me find ourselves feeling disposable to a movement that claims to defend our dignity.

Many women like me find ourselves feeling disposable to a movement that claims to defend our dignity.
sharetweet

That night in the hospital, praying, I felt sustained by my faith, but abandoned by my Church. I came out grateful to the doctors and nurses who saved me and more alienated than ever from the pro-life movement, which I now saw as ready to sacrifice women’s real needs for a clearer path to political victory.

I am still a woman who would not choose to have an abortion. I am also a woman who owes her life to accessible reproductive care. I don’t know yet what it will take to repair my relationship with the Church. But I do know my conscience won’t allow me to support laws or politicians that threaten women’s health care. Respect for every life is an ideal I embrace. But I’ve finally recognized that the pro-life movement, with all its good intentions, isn’t on my side.

Published in the March 2022 issue:
View Contents
Tags
Abortion
Women in the Church

How Many Leaves Does Your Shamrock Have?