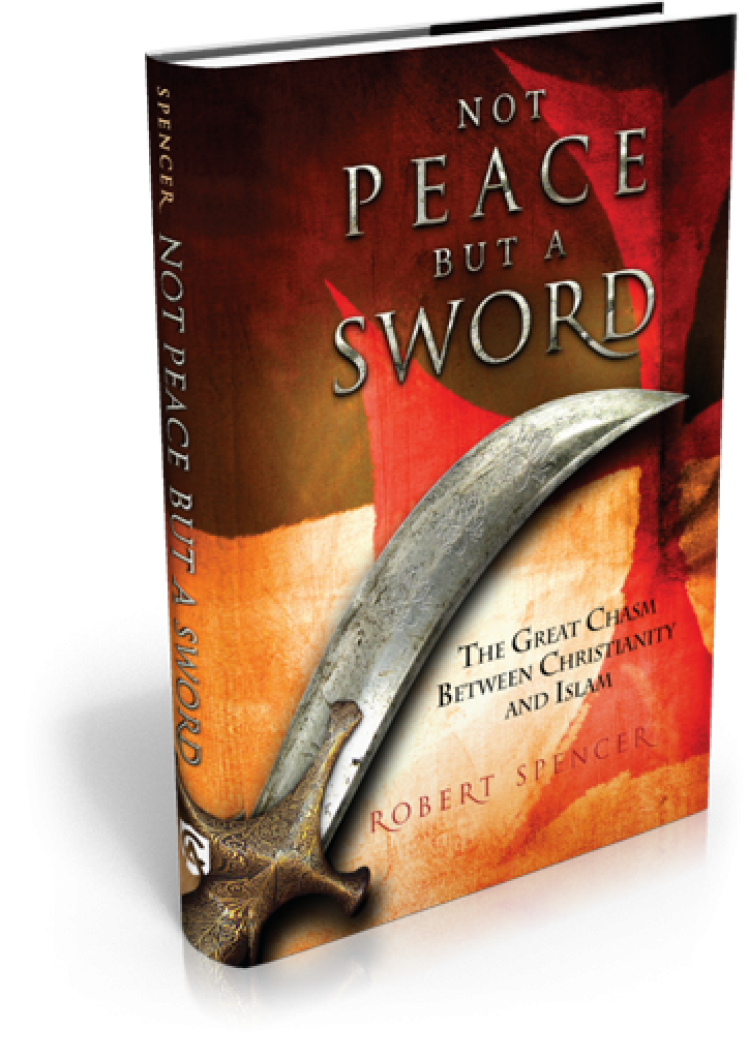 Most Catholics will remember the hysterical opposition to the so-called Ground Zero Mosque back in 2010. But what any may not realize is that one of the opposition’s principal organizers is considered by some influential Catholics to be the church’s chief expert on Islam.

Since the September 11 attacks, Robert Spencer has capitalized on the curiosity—and fear—that many Americans have about Muslims. While most of his sixteen books, including two New York Times bestsellers, attempt to convince all Americans that Islam is an inherently violent religion, Spencer has also authored books aimed at Catholics.

In 2003, he co-authored Inside Islam: A Guide for Catholics with a Muslim convert to Christianity, Daniel Ali, and in 2007 he wrote A Religion of Peace: Why Christianity is and Islam Isn’t. His newest book for Catholics, Not Peace But a Sword: The Great Chasm Between Christianity and Islam, was published earlier this year. In it, Spencer explicitly discourages dialogue and cooperation between Catholics and Muslims. The book’s cover features a curved sword, with the Arabic name of Muhammad inscribed on the blade, piercing a red cross. The first line of the introduction reads, “Can’t we all just get along? Maybe not. And if not, what then?”

He argues that Catholics and Muslims have virtually nothing in common, and falsely claims that Islam teaches that Christians should be persecuted. According to Spencer, Catholics put themselves in harm’s way by engaging in dialogue. Not only does this view place him in defiance of the Catholic Church’s teachings on dialogue and on Islam, it also reinforces the toxic belief that as Muslims as a group are a violent threat and should, at best, be avoided and, at worse, be opposed.

Despite its anti-dialogical position and unvarnished attempt to instill in Catholics a fear of Muslims, Not Peace But a Sword has received praise in a review in the National Catholic Register. Father C. J. McCloskey, a well-known member of Opus Dei, wrote, that Spencer is “perhaps the foremost Catholic expert on Islam in our country.” McCloskey affirms the mistaken yet pervasive belief that “the Muslims hate us,” and writes, “at its worst, Islam is diabolical; at its best, it is a Christian heresy—not unlike Mormonism without the violence.”

Catholic apologists and others—many of whom have authored their own critical books on Islam—have endorsed Spencer’s work. Catholic television (EWTN) personality Fr. Mitch Pacwa wrote an introduction to Inside Islam, and former Boston College professor William Kilpatrick (Christianity, Islam, and Atheism: The Struggle for the Soul of the West) wrote of Spencer’s most recent book, “A great many Catholics know only a Disney-fied version of Islam, and still cling to the dangerous illusion that Muslims and Christians share much in common. But as Robert Spencer ably demonstrates, beneath the surface similarities lies a deep and possibly unbridgeable gulf. This is must reading not only for Catholics but for all Christians.” Kirkpatrick’s book, as well as Spencer’s most recent one, was published by Catholic Answers, an organization responsible for publishing apologetic tracts and conservative voting guides.

Yet Spencer’s fans rarely note that he lacks any formal education about Islam. His academic background is in Christian theology. Even more problematic, he often engages in controversial anti-Islamic activism. Along with Pamela Geller, he led the xenophobic campaign against the Park 51 Islamic Center in Manhattan, which, thanks to both activists, became popularly known as the “Ground Zero Mosque.” Spencer and Geller also co-founded Stop Islamization of America and the American Freedom Defense Initiative, which have been designated by the Southern Poverty Law Center as anti-Muslim hate groups. Because of their fear-mongering, Spencer and Geller were banned from entering Britain earlier this year, when they attempted to attend a meeting of another anti-Muslim group, the English Defence League. His personal blog, Jihad Watch, consists of posts blaming Islam for violence around the world.

A dishonest look at history

In a December 10, 2012, interview with the Christian Broadcasting Network, where he is a frequent guest, Spencer asserted that “traditional Islamic law does not allow for peaceful coexistence between believers and unbelievers.” In fact, during the Middle Ages, Muslim rulers granted protection to Christians and Jews received, exempted them from, military service, and allowed them to run their own religious communities in exchange for a yearly jizya tax. Christians, Jews, and Muslims not only lived together but collaborated in the massive libraries of Baghdad and Cordoba, Spain, where they advanced science, philosophy, and theology. (Check out the books House of Wisdom and A Vanished World: Muslims, Christians, and Jews in Medieval Spain.)

In trying to contrast Islam and Christianity in his newest book, Spencer provides a brief summary of the Crusades that is laughably fictional. “It may be useful to remember that the Crusades, for all their errors and excesses, were a defensive action after 450 years of unanswered Islamic aggression.” While its true atrocities occurred on both sides, calling the Crusades a “defensive” measure is absurd, given that they were Christian military campaigns that originated in Europe and attacked lands and people in the Middle East.

Need for a new authority

Despite his lack of academic credentials, his habit of spreading misinformation, and his predilection for fear-mongering, Spencer has been invited to give speeches for U.S. law enforcement, government officials, and Catholic institutions like the Franciscan University of Steubenville. In pursuing Catholic bookstores in Washington, D.C., where I live, I’ve noticed that Spencer’s books can often be found in the Islam section. (Nearby are often books by Scott Hahn, Peter Madrid, and William Kilpatrick, who praised Spencer’s latest book.)

Fortunately, many Catholics have realized that Spencer does not deserve to be called an expert on Islam. In March, the Diocese of Worchester, Massachusetts, canceled Spencer from their slate of speakers for a men’s event back. In Sacramento, the bishop canceled Spencer’s July speaking engagement and barred him from presenting on church property. The National Catholic Reporter also called attention to and challenged the Register’s positive review of his new book. Still, many Catholic institutions are welcoming Spencer, like Ave Maria Catholic radio station in Ann Arbor, Michigan, which is hosting an event called, “Is Islam a Religion of Peace?”

What the church needs are charitable, truthful authorities on Islam, who can bring their own experiences of the faith into their writing and speaking. Thankfully, there’s no shortage of such experts. A Christian View of Islam is a compilation of essays by Georgetown University professor of Catholic-Muslim relations, Tom Michel, SJ. With a PhD in Islamic Studies, Fr. Michel has worked in the Vatican’s interreligious affairs offices and has lived in many Muslim majority countries. Meg Funk, a Benedictine nun who wrote Islam Is: An Experience of Dialogue and Devotion, offers her own experience dialoguing with Muslims through a series of encounters sponsored by the U.S. Conference of Catholic Bishops. She leads Monastic Interreligious Dialogue as its executive director. Funk wrote the book shortly after the Iraq war, intent on explaining the religion making headlines. George Dardess’s book Meeting Islam: A Guide for Catholics, explains core tenets and practices while offering a Catholic perspective. A number of books have also been published in recent years that focus on the medieval encounter between St. Francis of Assisi and Sultan Malik al-Kamil and using it as a paradigm for contemporary Catholic-Muslim dialogue (see In the Spirit of St. Francis and the Sultan, also by Dardess, The Saint and the Sultan, and the DVD In the Footsteps of St. Francis and the Sultan.)

Though these authors often begin by addressing similarities of the two faiths, they don’t shy away from addressing the differences. Differences need not divide, they argue, but can provide mutual illumination. Dialogue with Muslim does not threaten one’s Catholic faith (or life!), as Spencer would have us believe, but instead it often strengthens one’s understanding of and connection to Catholicism.

That’s certainly been my experience. My time among the Muslim community during my years as a student at Georgetown strengthened my Catholic identity, which I had begun to lose despite (and maybe because of) my many years in Catholic school. Witnessing and often participating in Islam’s unique rites and learning about Islamic belief made me not only appreciate and find beauty in Islam, but also in my own faith. My recommitment to my faith did not result from an aversion to Islam, but rather from a love of Islam that sparked my curiosity to rediscover the beauty of the faith of my childhood.

Yes, my Muslim friends and I often spoke about our similarities, but the more important conversations were often about the hard differences. My dialogue partners and I came out of these conversations not feeling threatened or upset, but heartened by the fact that both views were bolstered by deep charity and love. The differences—which Spencer says are so great as to preclude cooperation—are actually a source of mutual learning and spiritual enrichment.

Writers like Spencer are sometimes louder than the less confrontational voices we need to hear, but real Catholic authorities on Islam carry out what the church asked of them in Nostra aetate, the Vatican II document on non-Christian religions. The church, it reads, “urges its sons and daughters to enter with prudence and charity into discussion and collaboration with members of other religions. Let Christians, while witnessing to their own faith and way of life, acknowledge, preserve and encourage the spiritual and moral truths found among non-Christians, together with their social life and culture.”

Instead of so-called experts who trade on fear, we need Catholics who echo the sentiment of Christian de Cherge, a Cistercian monk who devoted himself to living alongside Muslims in Algeria. Along with his community, he was murdered in 1996. Before his death, he wrote of his desire to “immerse my gaze in that of the Father to contemplate with him His children of Islam just as He sees them.”

Inshallah, we too can learn that gaze.

Jordan Denari is a recent graduate of Georgetown University, where she studied Muslim-Christian relations. She is now conducting research in Amman, Jordan on a Fulbright grant.