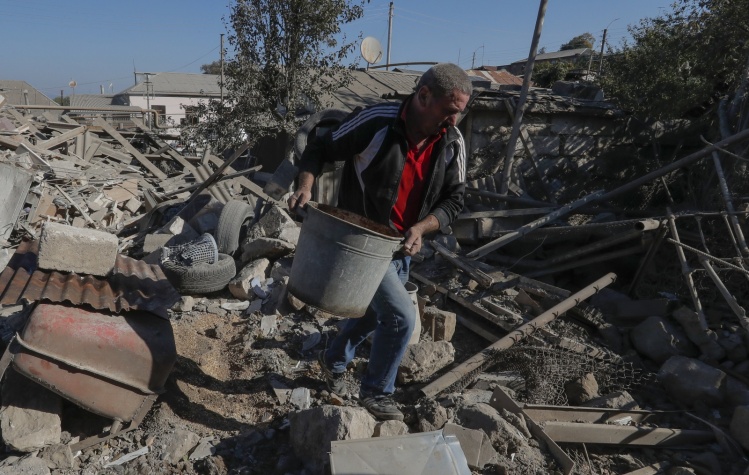 A man carries debris from the ruins of a building in Stepanakert, Azerbaijan, Oct. 17, 2020, following recent shelling during a military conflict over the breakaway region of Nagorno-Karabakh. (CNS photo/Reuters)

On September 27, intense fighting broke out in the rugged Nagorno-Karabakh region of the southern Caucasus, shattering a shaky peace that had held for nearly three decades. About the size of the state of Delaware, the separatist enclave is home to almost one hundred fifty thousand people, the vast majority of them ethnic Armenians. But the self-proclaimed “Republic of Artsakh,” backed by the Armenian military, has long been recognized as belonging to neighboring Azerbaijan. Now, with a stronger economy and more advanced weaponry than Armenia, oil-rich Azerbaijan has begun reasserting its claims, originally granted in the Soviet era by Joseph Stalin. After three weeks of worsening violence (much of it conducted via trench warfare in the mountains and remote drone strikes in cities) and two shattered ceasefires, a hundred civilians and thousands of combatants are dead, hundreds more injured, and seventy-five thousand people—about half of the total population of Nagorno-Karabakh—are displaced.

The brewing war between Armenia and Azerbaijan hasn’t received much attention from Western media, but there are reasons to be gravely concerned. Beyond the growing humanitarian crisis, the conflict threatens to draw in larger regional powers like Turkey, Russia, and Iran. Turkey, a NATO ally, has acted particularly irresponsibly: President Recep Tayyip Erdoğan has loudly proclaimed his support for the Azeri incursion while calling on Armenia to abruptly withdraw from a region it has effectively controlled since 1994. What’s worse, Turkey has added fuel to the fire by hiring and sending hundreds of Syrian mercenaries into the region to fight against Armenia. Should the conflict expand into Armenia itself, Russia, which brokered the initial ceasefire but still sells weapons to both sides, would be treaty-bound to defend it. And Iran, which borders both countries to the south, has a sizable Azeri minority; it, too, has indulged in some bellicose rhetoric, after a misfired Armenian missile landed in its territory.

So far, diplomacy on the part of the international community has mostly been limited to tepid pleas for Armenia and Azerbaijan to respect the ceasefire.
sharetweet

So far, diplomacy on the part of the international community has mostly been limited to tepid pleas for Armenia and Azerbaijan to respect the ceasefire. A few sanctions have emerged, but they’ve proved largely ineffective. Among world leaders, the most outspoken supporter of Armenia has been French President Emmanuel Macron. He not only denounced the “jihadist” behavior of Azerbaijan and Turkey, but called on NATO allies to hold Turkey to account.

One of the few countries with the power to do so is the United States. Along with France and Russia, it’s a member of the so-called Minsk Group, which has worked since the 1990s to find a permanent, peaceful resolution to the Nagorno-Karabakh conflict. But the Trump administration, as David Ignatius writes in the Washington Post, has been “missing in action.” Instead of convening high-level talks with European allies, Armenia, or Azerbaijan, the United States has been “delegating diplomacy to Moscow,” as Joe Biden put it. True, in mid-October Secretary of State Mike Pompeo let slip a veiled complaint about how “third parties” are making the situation in Nagorno-Karabakh worse. But as the Azeri foreign office points out, Pompeo’s grumbling hardly reflects official U.S. policy: along with Russia and France, the United States still refuses to take sides.

Partly in response to massive protests sweeping across southern California, home to nearly two hundred thousand Armenian Americans, Rep. Adam Schiff has advocated for a fundamental shift in U.S. policy regarding Nagorno-Karabakh. Condemning Azerbaijan’s aggression, Schiff has called for full U.S. diplomatic recognition of the Republic of Artsakh. At the very least, the United States must take an active role in diplomatic efforts to resolve this conflict before it spirals into full-blown ethnic cleansing. Grousing about other “third parties” isn’t enough.

Update: Since this article was written, a third ceasefire was brokered, this time by the United States. President Trump tweeted his congratulations Sunday evening; just minutes after the ceasefire took effect at midnight, Armenia and Azerbaijan both reported violations.