Using the Courts to Destroy Unions 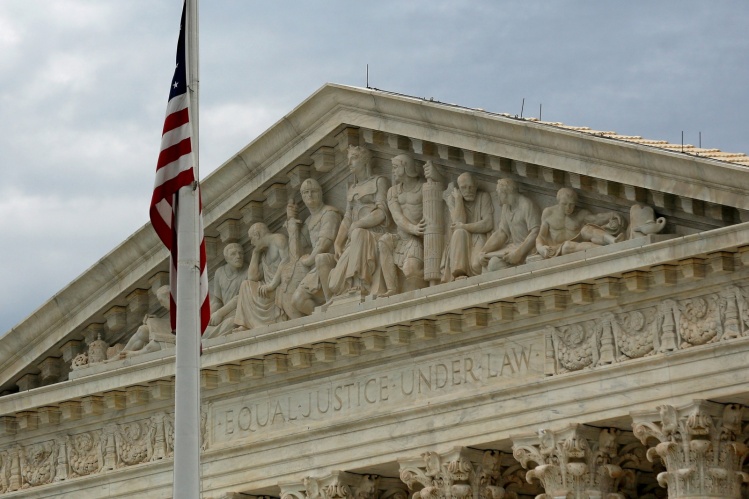 A view of the U.S. Supreme Court building in Washington is seen in this 2015 file photo. (CNS photo/Jonathan Ernst, Reuters)

Many conservatives believe in the untrammeled rights of employers. Consequently, they despise unions. They also can’t stand it that organized labor usually backs Democrats and they especially detest public employee unions which, by their very nature, advocate for government.

For decades, these same conservatives criticized the politicization of the courts, accusing liberals of “inventing rights,” “making new law” and indulging in “judicial activism.”

And one more thing: Conservatives of late have charged that liberals refuse to acknowledge the importance of allowing revered and useful social institutions to thrive and maintain their organizational integrity. So, for example, the right insists that religiously linked organizations opposed to contraception must under no circumstances be required to cover birth control in their health plans.

This bundle of contradictions is on open display in the case of Janus v. American Federation of State, County and Municipal Employees. Argued this week before the Supreme Court, the suit is an effort to overturn forty one years of settled precedent for the purpose of crippling the American labor movement.

The claimant, Mark Janus, an Illinois state social worker, argues that his First Amendment liberties are violated because he has to pay an “agency fee” to the union even though he is not a member and might disagree with its politics.

On the merits, nothing about the agency fee deprives Janus of his right as a citizen to speak out as he wishes. And the idea behind collective bargaining is that when a majority of employees decide to join a union, its bargaining typically produces higher pay and benefits for the entire bargaining unit. Agency fees pay for this collective effort.

As the nation’s Roman Catholic bishops argued in their brief supporting the union, “Without these clauses, unions face a ’free rider’ problem that dramatically weakens them and, in turn, their bargaining power on behalf of workers, as experience in ‘right-to-work’ states to date has borne out. Thus, ‘right-to-work’ laws are seen to represent a governmentally imposed ‘limit [on] the freedom or the negotiating capacity of labour unions.’”

This is precisely why conservative money and influence came together to bring this case. And, as University of Baltimore law professor Garrett Epps observed in The Atlantic, the litigation strategy of “the powerful anti-union advocacy network” was to avoid creating a factual record on the agency-fee issue in the lower courts.

Kennedy’s attack read more like the oration of a conservative state legislator than the measured words we might expect of a justice.
sharetweet

Instead, the anti-labor consortium sought to force the case up to the Supreme Court at a moment when it hoped a conservative majority would reflexively take its side. The record is so thin, Epps noted archly, that the court will be operating “in the dark, with no more grounding in facts than the average afternoon radio call-in show.”

To know how political this case is, consider Justice Anthony Kennedy’s polemical response to the solicitor general of Illinois, which sided with the union. Kennedy seemed incredulous that the state could have a stable partnership with a union that was fighting for “a greater size workforce, against privatization, against merit promotion...for teacher tenure, for higher wages, for massive government, for increasing bonded indebtedness, for increasing taxes.”

These are legitimate political issues, but Kennedy’s attack read more like the oration of a conservative state legislator than the measured words we might expect of a justice.

Kennedy asked a pro-union lawyer: “If you do not prevail in this case, the unions will have less political influence; yes or no?” The answer was yes, a victory for Janus would curb labor’s political power. To which Kennedy candidly commented: “Isn’t that the end of this case?”

But in making a point of his own, Kennedy also underscored that a labor setback would clearly benefit the Republican Party. As a paper for the National Bureau of Economic Research has shown, right-to-work laws, based on the principles of Janus’ argument, decrease Democratic presidential vote shares by 3.5 percent.

The very slim hope of dodging a blatantly partisan decision rests with Chief Justice John Roberts. Yes, it’s a long-shot, but the chief has at times been sensitive to the dangers of the court appearing too partisan, and he is sympathetic to the rights of mediating institutions in our society, which include churches but also unions.

On the other hand, a five to four anti-labor ruling would remind us why Senate Republicans refused even to consider Judge Merrick Garland’s nomination for the seat now occupied by Justice Neil Gorsuch. It would reveal a truly activist court mired in politics—and a long way from Roberts’ vision of judges who only call balls and strikes.