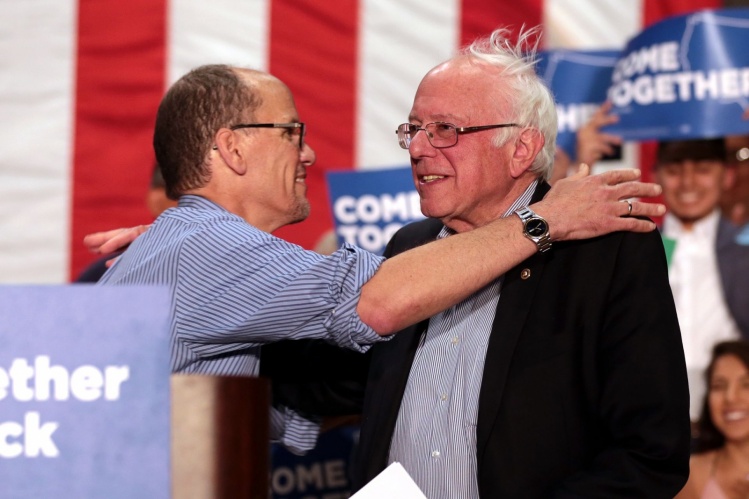 DNC Chair Tom Perez with Bernie Sanders, at the Come Together and Fight Back Tour in April 2017 / Gage Skidmore - Wikimedia

Gary Dorrien, the distinguished Union Theological and Columbia University historian, reviews Timothy Snyder’s bestselling anti-Trump manifesto, On Tyranny: Twenty Lessons from the Twentieth Century, in the current Christian Century. While endorsing most of what Snyder writes, Dorrien takes him to task for saying “nothing about the Bernie Sanders presidential campaign, which drew enormous crowds, and almost nothing about economic injustice.” Snyder, according to Dorrien, “underplays the necessity of building a resistance movement that asks rude questions, challenges normal politics, does not delay out of politeness or caution, and creates new organizations demanding equality and democratic accountability.”

I haven’t read Snyder’s book, but have read much of what he has written about Trump for the New York Review of Books. Snyder is a highly regarded historian of Eastern and Central Europe, best known for his books Bloodlands: Europe between Hitler and Stalin and Black Earth: The Holocaust as History and Warning. He sees Trump as a familiar authoritarian figure who poses a grave threat to American democracy, and On Tyranny urges Americans to get back to basic democratic hygiene: “Defend institutions,” “Do not obey in advance,” “Believe in truth.” Dorrien reports that Snyder recently warned that some version of the Reichstag fire is “pretty much inevitable.” Trump will then declare a state of emergency and move to govern autocratically, challenging the fundamental institutions of American democracy.

Dorrien takes these warnings seriously, but is impatient with Snyder for advocating “small-bore” solutions instead of calling for a more robust political resistance in the unvarnished Sanders mode. “Authoritarian nationalism is best opposed by a democratic alternative,” he writes.

Sanders is in many ways a refreshingly candid politician, but like most ideologues he has some serious blind spots
sharetweet

Not many people—Snyder included, one presumes—would disagree with the need for such a political rather than merely personal opposition. Questions arise, of course, as to whether the movement surrounding Sanders offers a realistic political answer in a nation where populism, at least in the past ninety years, tends to lean right rather than left. Sanders is in many ways a refreshingly candid politician, but like most ideologues he has some serious blind spots. I consider his holier-than-thou disdain for becoming a member of the Democratic Party as one. Another was revealed in his appalling interrogation of Russell Vought, the evangelical Christian Trump nominated for deputy director of Office of Management and Budget. That embarrassing exchange revealed Sanders to have only the frailest grasp of why a Christian like Vought believes that faith in Jesus Christ, not in any other savior or religion, is necessary for salvation. Sanders insisted that Vought’s forthright declaration of that belief made him an Islamophobe and thus unacceptable to hold public office. Needless to say, most Muslims hold convictions about Islam similar to the ones Vought has about Jesus Christ.

As it happens, Dorrien questions Snyder’s lack of attention to religion, and one presumes he would find Sanders’s recent stumbles in that area equally dubious. He is especially critical of Snyder, however, for being “strangely silent about racism.” “White racism has been the rocket fuel—though not the chief cause—of every form of authoritarian nationalism to gain power in the past century, and it still is,” Dorrien argues. I wonder what the Chinese or the Koreans would make of that statement, after their experience of Japanese conquest in the last century, or what the Tutsis would have to say about the murderous chauvinism of the Hutus. White racism is a seemingly ineradicable curse, but it is not the sole fuel or form of authoritarian nationalism.

“No democracy can perpetually survive gross disparities in economic and social conditions,” Dorrien writes in calling for the establishment in the United States of the sort of social democracy that prevails in many European states. Of course, gross disparities in economic and social conditions have existed in the United States for much of its history. I don’t know if the United States is “hurtling” towards authoritarianism, as Dorrien claims. I am more certain that historically the sort of social democracy he champions has gotten precious little traction in this immense and immensely rich, profligate, deeply individualistic, violent, and deeply divided, continent-wide country. It is not my impression that there is a surfeit of “patience” or a shortage of “rude questions” on either side of the political divide at the moment. Nor am I under the impression that “normal politics” has gone unchallenged in recent years. What I’d dearly like to see are a few people with social democratic instincts not just draw enormous crowds, but get good at normal politics. Small-bore has its place. That’s usually where politics begins.