'The Twenty Days of Turin' 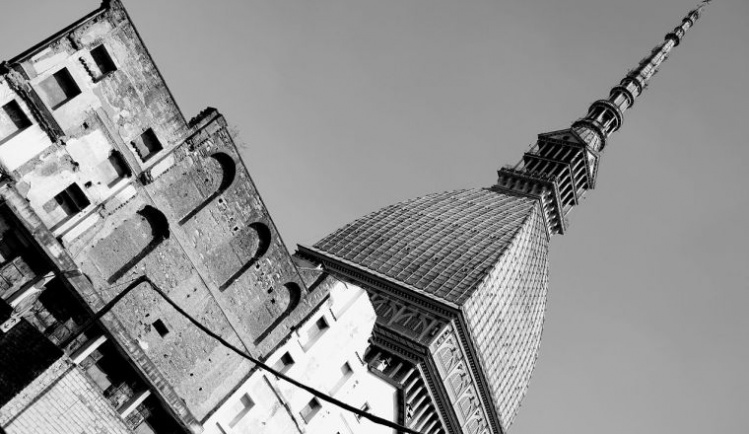 A community that begins anonymously—with members sharing their feelings, fears, and desires—and builds with the opportunity to “become friends” sounds appealing. It also sounds much needed, “considering how hard it’s gotten for people to communicate these days.”

That idea and those lines don’t come from a contemporary brief for the benefits of social media networks, but from the first English-language translation of The Twenty Days of Turin, a 1977 novel by the Italian author Giorgio De Maria. A friend of Umberto Eco and Italo Calvino, De Maria was radically opposed to Italian clericalism (even publishing a short story about the assassination of a fictional pope), but in the late ’70s abruptly re-converted to Catholicism and stopped writing fiction. Finding The Twenty Days of Turin is like discovering a prophetic prose relic containing a fundamental message about being human: we seek to connect.

Long before Facebook and Twitter, there was the “Library,” De Maria’s fictional underground community that arises from the ashes of Turin, whose physical collapse is reflected in a “poverty of the human imagination and lack of initiative.” In words that presage our contemporary moment, De Maria writes “the situation of finding ourselves thrust back almost at once to our indigenous wholesomeness—an event many ‘purebred Turinese’ had even longed for with a sour regionalism—had ended up producing a general sense of loss.” Without the flavor and soul of other backgrounds and voices, Turin dried up and darkened.

The “community centers” the city government initially present as a solution are full of “indescribable, unutterable, tomblike quiet.” People want to connect—but over distance, and through words. Literature won’t do, the young creators of the Library argue, because “there’s too much artifice in literature.” Only diaries and journals contain real words, real emotions. For many, it proves enticing: “the prospect of ‘being read’ quivered in the distance like an enchanting mirage . . . I will give myself to you, you will give yourself to me: on these very human foundations, the future exchange would happen.” Once messages are shared, readers can find those that appeal to their own anxieties and hopes, and for a fee—600 lire to get the author’s name, 3,000 for the whole manuscript, all going to a local convent, the Little House of Divine Providence—they can truly connect. De Maria’s fictional social media is chilling in its prescience. Like our current digital world, it has a range that’s “infinite: it had the variety and at the same time the wretchedness of things that can’t find harmony with Creation, but which still exist, and need someone to observe them, if only to recognize that it was another like himself who’d created them.”

The Library becomes central to the goals of the novel’s unnamed narrator, who has written a few books on “municipal historiography” and works in a “positively unexciting” job. His newest subject, however, is more ominous. Turin, his birthplace, had been swept-up in a “phenomenon of collective psychosis” a decade earlier. Droves of citizens had become insomniacs, drifting out of their bedrooms and into the streets. Screams, “with something dismal and metallic at the heart” of them, rattled windows. Strange earthquakes shook the streets while leaving adjacent buildings or blocks untouched. The Library is essential in his research into the Turin of a decade before, but that research is complicated by his paranoia. He constantly thinks he is being followed, surveilled, documented, and plotted against. De Maria is masterful in creating this world of dark arts, where even a nun, Sister Clotilde of the Little House of Divine Providence, threatens him about poking into the city’s past: “If you, sir, are a Christian, if the waters of baptism didn’t rinse your forehead in vain, why do you insist on searching where human reason could never find anything but shadows?”

The paranoia of The Twenty Days of Turin calls to mind a work of similar portent: Thomas Pynchon’s sclerotic, satirical 1966 novel, The Crying of Lot 49. Pynchon’s novel contains the prototypical modern detective, Oedipa Maas, a suburban housewife who frequents Tupperware parties in Southern California. Oedipa is soon subsumed into a multinational postal conspiracy which, she believes, might also be an elaborate prank by her billionaire ex-boyfriend. The reader isn’t quite sure, but Pynchon makes sure our confusion is the point: paranoia is our most earnest attempt to find structure in a disordered world. Re-reading Pynchon’s comic novel in the age of fake news and a reality-show president is unsettling: if each day brings us a new conspiracy theory, then paranoia is not fringe—it is mainstream, standard operating procedure.

De Maria’s novel is a good complement to Pynchon, and perhaps an even more relevant work for our era, but there are important differences between the two. Pynchon’s novel is campy, a psychotropic romp, while De Maria’s is classic Italian horror: claustrophobic, nightmarish, tinged with perversions of Catholicism. One character says: “In this city, demons lurk under the ashes.” De Maria’s Turin is dark and surreal. It is a city at the end of its world.

Still, it’s De Maria’s arresting vision of social media that commands attention. Among those most drawn to “connecting through distance” is an eschatological group that De Maria calls the “Millenarists.” “Dressed in psychedelic patterns,” they hold demonstrations, chant, and speak to a patron saint. They also distribute pamphlets with dire warnings about “inattentiveness” toward “that which seems invisible around us, but no less worthy of our concern.” Another character, skeptical of the Library, tells the narrator it “helped to furnish the illusion of a relationship with the outside world: a dismal cop-out nourished and centralized by a scornful power bent only on keeping people in their state of continuous isolation.” Turn on, log in, and drop out: In the context of our own social networking age, the irony is hard to miss.

In the midst of his interviews and research, De Maria’s narrator begins to wonder if he’s being played. A local attorney offers one explanation for why he might be feeling that way: “Perhaps because we’re an isolated city, out of the international time stream, where certain experiments can be carried out without drawing too much attention.” By the end of the book, the narrator has had enough, and decides to flee the city—but not before The Twenty Days of Turin has delivered its chilling prophecy: Our whispers into the distance offer the illusion of communication, but in confessing our secrets to the world, we risk losing our souls.