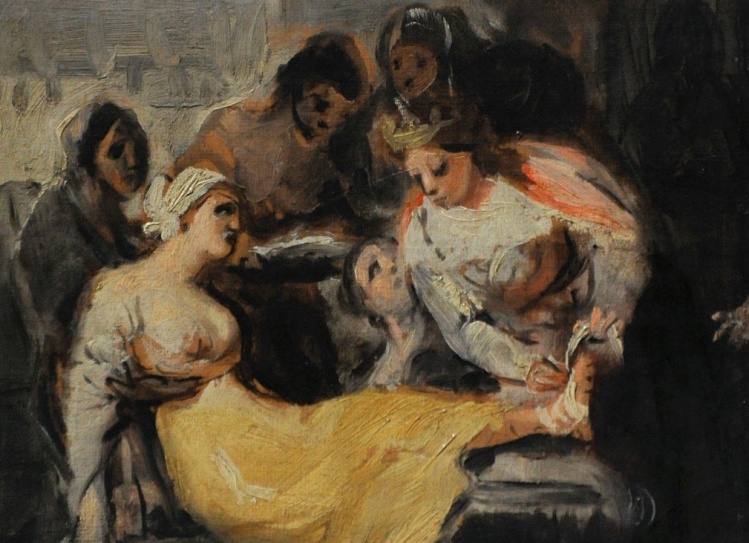 “How do you feel about being a mother?” the woman from social services asked, standing with me in between my sons’ beds. She had called a few minutes before to say she was coming upstairs to the apartment where I lived, because my son had told someone his dad used to hurt him, which was true—true when we used to live with him, before. She was therefore obligated to come without warning to investigate, to make sure we were all okay. “I love it,” I told her, telling the truth, for once.

St. Elizabeth of Portugal is known for a lie that came true. She was married at age seventeen to her adulterous husband, King Denis, who hated, among other things, her willingness to help the poor. One day she was leaving the house, again, to bring bread to the hungry, and he stopped her as she was going out the door. “What do you have in the basket?” he asked. “Roses,” she lied. But when he stole the basket away from her to prove she was a liar, he opened it up to find roses. It was a miracle. Jesus turned the bread into roses so that she wouldn’t be a liar, this time.

We would go to church and lie. We would sit there, praying together, and I would not know what to say. The minute before, on the way to church, he had turned around in the car and hit the youngest in the back seat. For what? For being too loud, for being too slow. For crying at the wrong time. In front of other people, he could make it all seem, somehow, pleasantly humorous. He was charming. I remember, once, a priest describing us to someone else in the church as a charming couple. I wondered if he, or they, could tell just how hard we had to lie to make their lies possible too.

I struggled to know what the truth was through all the lies, but I was taught that God loved moral absolutes. You do not lie. You do not steal. You do not commit adultery. You get married and you stay married. You made a promise. That’s it. I shuddered before the horror of a God for whom there were no exceptions. Miserable as I was, I figured that misery was the cost of the promise I had made. Every now and then, I would think, maybe love doesn’t have to be like this. But I felt like my soul would break in two if I broke myself off from this person who hated me and, worse, hated my children. Such hate was justified, he explained, again and again, because of our inevitable falls from grace—that is, from his grace in the strange, small universe he had made for all of us. I don’t have to imagine what hell is. I already know.

Jesus did not blame them for their sin in this instance; instead he took their sin and turned it into grace.
sharetweet

Why would there be a saint for whom Jesus would make a lie true? Not every time Elizabeth lied, one presumes, did her words become, suddenly, not lies. Just because Jesus changed her bread into roses didn’t mean that she didn’t actually lie about it first. It just meant that, this one time, miraculously, others didn’t catch her in the lie, didn’t get to justify all their violence toward her for that supposed abuse of language. It seems to me to be the perfect miracle.

Perhaps that is why a version of the miracle of the roses is told about several saints and their various husbands. Sometimes the husband accuses his wife merely because her charity seems to threaten the extent of their resources, as in the case of St. Elizabeth of Hungary, the great aunt of St. Elizabeth of Portugal. Sometimes violence is at the heart of the story, as in the case of St. Rita of Cascia in Italy, who like me, had two sons. St. Rita did not leave her violent husband, and her sons grew up to learn violence from their father. She prayed for them. She helped her husband repent, but not soon enough, because his violence incited the neighbors he was feuding with to stab him to death. Her sons vowed revenge. She prayed for them. Her prayers led, seemingly, to this: both died of illness, before they could continue the killing. That was the best she could do.

For the longest time I could not see what truth lay beyond the immediacy of my family’s suffering. All I knew was that being there, in that family, together, was not for my children’s good, although I struggled for years even to see this much. The idea that marriage was always good for children was too strong, too vivid, until it became plain that this one was not. But when I decided that I would try not to lie anymore, I no longer knew exactly how to tell the truth to other people. The lies our family had told, to each other, to the outside world, the lies my husband told my children and me—they all made a dreadful barrier between me and everyone else. How could I start to explain that everything was not fine, though I had told so many people so many times that it was? It would seem like I was a liar to myself, again. Rationally, though I knew very well that human moral choices, at least, are a matter of situation, I thought that religion was different, and that marriage was about religion. I couldn’t quiet the thought that God hated you even when you had a good reason to depart from the absolute of moral consistency. Then I remembered the roses.

When St. Elizabeth of Hungary, St. Elizabeth of Portugal, and St. Rita were standing there with their bread, they did not pray. Instead, they lied, without asking for anything different. Jesus took that moment and made their lies into truth to save them. And they were saved, not in the moment of their exemplary piety, but in their venial sin. Jesus did not blame them for their sin in this instance; instead he took their sin and turned it into grace. This seems to me to be the perfect miracle. Maybe God was more than I thought he was. Maybe he could save me too. Would he grant forgiveness for my former lies, and make a path toward a better truth? Was his grace different from the false fidelity to his fabricated world that my husband demanded?

I got a new job, which brought more space to think and see what was happening. After about a year, I started to be able to string the events of my life together, piece together my memories by carefully writing them out. When the pandemic hit, a few months later, I found a desperate way to take heart of grace. I said to my husband, you have to leave. He did not want to. But he did. And it was a miracle. I still thought I might die, that he might come back to kill us, that he would find a way to turn his anger back on us again. But it was worth a shot. It was the best I could do. And, for the moment, it worked.

When later on, much later on, my child, still holding on to the memory of violence, confessed to a counselor that he’d been hurt, he was telling the truth. He had not been able to say this before. When social services came, they wanted to hear the truth from me too. When they asked me, how do you feel about being a mother, I could say, I love it, because I was no longer in despair. This is what I love. Not that former husband, who did those things, who wanted me to save his face at any cost, to lie; but these children, and also myself, and also God, and the saints. And finally, I was telling the truth.