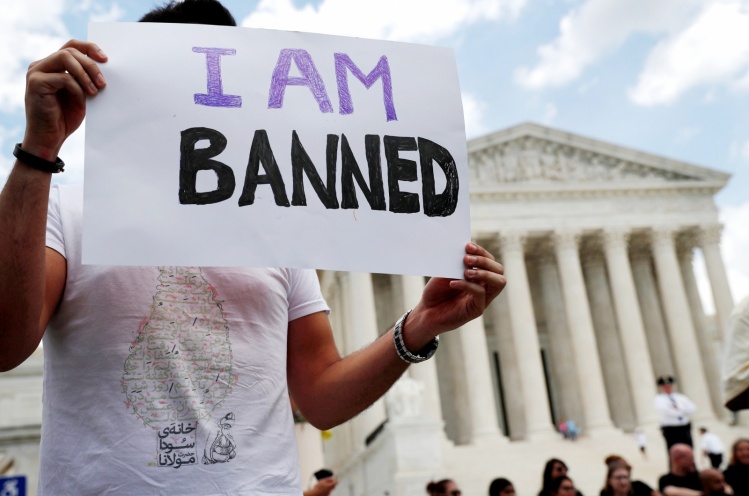 A university student from Iran holds a sign outside the U.S. Supreme Court building in June 2018. (CNS photo/Leah Millis, Reuters)

Amid the din of the final days of Donald Trump’s impeachment trial, his effort to keep America white almost failed to register. Announced in late January and set to take effect on February 22, the latest expansion of the administration’s travel ban imposes severe immigration restrictions on six more countries—Myanmar, Kyrgyzstan, Eritrea, Sudan, Tanzania, and Nigeria—bringing the total number of banned nations to thirteen and affecting more than a quarter of a billion people in Africa alone.

That the president should seek to deny entry to the persecuted Rohingya, a Muslim minority in Myanmar, is hardly surprising, given his known hostility toward vulnerable religious minorities. But why target Nigeria, Africa’s most populous country and a key U.S. trading partner? True, Nigeria is technically majority-Muslim (51 per cent), but it also has the world’s sixth-largest Christian population (about 86.5 million people). The ban, which “blindsided” Nigeria’s foreign minister on the eve of a planned diplomatic visit to Washington, also harms a sizable number of American citizens and permanent residents of Nigerian origin—many of whom occupy middle-class professions in science, medicine, and academia. Nigerians constitute the largest community of African immigrants currently residing in the United States. About 327,000 strong, they’re largely concentrated in cities like Dallas, Chicago, Baltimore, Atlanta, Phoenix, and Houston. Reports of confusion and anxiety have already emerged from cities like New York, where Nigerian-Americans have been forced to postpone weddings, cancel family reunions, and stop wage remittances.

A more plausible explanation of the travel ban is racism.
sharetweet

Speaking to reporters on condition of anonymity, officials from the Department of Homeland Security defended the travel ban by arguing that Nigeria, along with the other countries, has failed to screen potential terrorists from entering the United States. Specifically, they allege that these countries have been too lax with passport control, information sharing, and risk assessment. But in that case, why has the administration banned only permanent immigration visas, whose applicants already undergo “extreme vetting,” while continuing to issue temporary tourist visas to citizens of those same countries? Couldn’t potential terrorists simply avail themselves of tourist visas?

A more plausible explanation of the travel ban is racism. If Kamala Harris’s assessment doesn’t convince you that the ban is “rooted in anti-immigrant, white supremacist ideologies,” you need only recall that Donald Trump declared at a January 2018 Oval Office meeting with lawmakers that Nigerians and other immigrants from “shithole countries,” once settled in the United States, would never “go back to their huts.”

The Trump administration has quietly ratcheted up its use of what Aaron Reichlin-Melnick, a policy analyst with the American Immigration Council, calls the “hidden weapons” of immigration law. Bolstered by a June 2018 Supreme Court ruling that upheld a revised version of Trump’s original travel ban, and with no effective oversight from Congress, the administration has, without much attention from the media, “pushed the boundaries of what’s already on the books,” exploiting loopholes and implementing policies that “go beyond what the law says.” That’s most obvious in the case of the Remain in Mexico policy, which remains in effect today.

It’s now been three years since the original travel ban was issued, which was greeted with public outrage. Protesters massed at airports and state attorneys general filed lawsuits. The public’s response to this latest iteration of the ban has been far more muted. But with Laotian refugees now being targeted for deportation in Wisconsin and heavily armed BORTAC forces being shifted away from the U.S.-Mexico border and deployed in “sanctuary” cities throughout the country, the need for forceful public resistance has never been clearer. Like the proverbial frog in hot water, we’ve reached boiling point. Will we wake up, or perish?