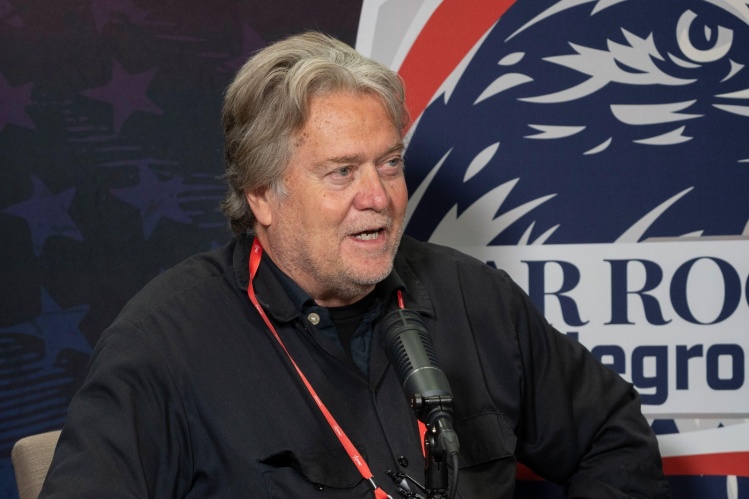 I am not a regular C-SPAN viewer, although, much to the annoyance of my spouse, I am a compulsive channel surfer. The other day I stumbled upon C-SPAN’s coverage of a speech given by Steve Bannon at the recent ultraconservative CPAC conference. I watched about five minutes of it before surfing away in bemused alarm.

I’m not sure “conservative” is the correct term to describe what the annual Conservative Political Action Conference is now about. My sense is that, in years past, it drew a cross-section of American conservatives, but it now appears wholly devoted to Donald Trump’s grievance-driven populism. Bannon, recently convicted of failing to obey a congressional subpoena from the committee investigating the January 6 riot at the Capitol, allegedly had a hand in coordinating that violence. Bannon had already been indicted for pocketing money donated to finish construction of the border wall, but Trump pardoned him for that before leaving office. Does anyone doubt Trump will pardon everyone involved in the January 6 catastrophe if he wins the presidency again?

Bannon’s exhortation to the conference audience focused on the well-worn issues of supposed election fraud, the machinations of the “administrative state,” the mainstream media’s leftist agenda, immigration, and the financial fraud practiced by bankers and corporatists—often called “globalists”—who are responsible for destroying the middle class. Bannon traced his own “awakening” about those facts to the financial crisis of 2009. The Obama-orchestrated bailout of the financial system, Bannon argued, left the fat cats even fatter while immiserating the majority of patriotic Americans. He praised Trump for speaking and acting in the interest of ordinary Americans as opposed to the corrupt and arrogant elites in both parties. Trump’s followers will have to be 120 percent committed to the forthcoming battle or the nation will continue to fail and the forces of wealth, privilege, and cultural arrogance will triumph.

How MAGA loyalists respond to the “stolen election” is the true test of their faith in Trump, but also of their belief in God’s providence.
sharetweet

All of that is MAGA boilerplate, but Bannon did say something that roused me from the stupor that usually sets in whenever I listen to one of Trump’s propagandists. Trump’s election victory in 2016 was “providential,” Bannon exclaimed. But even more surprising, Bannon claimed that Trump being driven from power in 2020 was “also providential.”

Bannon is still some kind of Catholic, or so I’ve read. He’s been loosely associated with conservative Catholic fabulists in Europe. Raised Catholic, he attended a Catholic military high school back when such things existed. Talk of Trump as a “providential” figure has been more common among his Evangelical Christian supporters than among Catholics. Some believe him to be a historical figure like the Persian King Cyrus, who liberated the Jews from Babylonian captivity. Trump, they say, is liberating the United States from the captivity of political correctness and the threat of socialism. It is an article of faith among these believers that God can use an imperfect man, such as Cyrus or Trump, to effect the destiny of his chosen people.

I found Bannon’s shrewd assertion that even Trump’s loss was “providential” particularly audacious. It buys into a familiar historical belief of millennialists, who prophesize the world is going to end on a certain date. When the world does not end as foretold, some devotees lose their faith, but others find a way to explain the prophecy’s failure as part of a larger plan—a necessary testing of the believers’ true faith. Clearly, this is how Bannon is recasting Trump’s loss. How MAGA loyalists respond to the “stolen election” is the true test of their faith in Trump, but also of their belief in God’s providence. Emphasizing that Trump is in this fight to the death, Bannon is rallying a millennial army. Anything less than total commitment will usher in defeat at the hands of the ungodly. Bannon stressed the same point again and again: despite Trump’s loss, the battle has only begun.

One would like to think that such anti-democratic movements are unprecedented in American politics, but of course they are not. It might be more accurate to say that they usually fail to capture the presidency. Nixon was corrupt, but he was not determined to pull down the entire constitutional order to salvage his presidency. More important, neither was his party. Trump and his Republican base present a more profound threat. Recent news reports have revealed that the former president was frustrated by his inability to co-opt the military for his political purposes. He even told someone that he needed generals as loyal to him as German generals had been to Hitler. That outcome is presumably something people like Bannon devoutly pray for. Let’s hope providence has other plans.