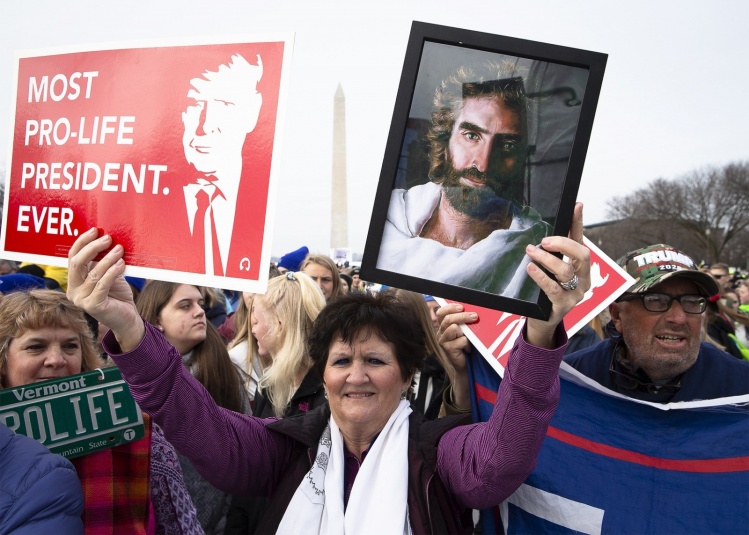 A woman holds an image of Jesus alongside the likeness of President Donald J. Trump during the annual March for Life rally in Washington Jan. 24, 2020. (CNS photo/Tyler Orsburn)

“Politics, as a practice, whatever its professions, has always been the systematic organization of hatreds,” Henry Adams famously wrote. Both his grandfather and great-grandfather had been presidents of the United States, so Adams presumably knew something about politics on the ground, as well as in theory.

I was reminded of that aphorism when, much to my surprise, we received in the mail something called the “Catholic Opinion Research Survey” from the conservative lobbying and organizing group CatholicVote. The survey itself consisted of eleven questions gauging one’s response to “Anti-Catholic Incident Summar[ies].” Summary is the key word here. These incidents of supposed anti-Catholic “bigotry” include such golden oldies as “liberal Senator Dianne Feinstein’s” questioning of federal judge nominee Amy Barrett in 2017. “The dogma lives loudly within you,” Feinstein, a graduate of a Catholic high school, commented. That, in fact, seems to be an accurate description of Barrett’s ardent faith. The underlying issue, of course, was abortion rights—a question Barrett predictably sidestepped. Feinstein was accused of suggesting that there should be a “religious test” for judicial nominees. But since Catholics believe faith should influence one’s politics, was her question really out of bounds?

No opinion survey of possible Republican voters is complete, of course, without a question about that “nasty” woman, Hillary Clinton. CatholicVote puts the existential threat Clinton and other “liberals” pose this way. “If elected President, she promised to use the full force of government (including the Justice Department and the IRS) to punish those who believe in the traditional definition of marriage (‘a union between one man and one woman’) and who believe in the right-to-life.” It is true, of course, that Clinton is a fervent defender of abortion rights. But the improbable idea that she would try to have the Justice Department prosecute Americans who oppose same-sex marriage or abortion is wild speculation.

The people at CatholicVote seem to think that one of the salient issues of our time is how the courts have banished displays of the Ten Commandments from schools and public spaces. Presumably it wants the Catholic, rather than the Protestant or Jewish, version of the commandments restored to those places of honor. “How concerned are you,” CatholicVote also wants to know, “that Christianity (which includes Christian moral teaching) has become criminalized in America—especially in liberal-Left run states and cities”? Yes, Christianity is often denigrated and mocked in popular culture. But criminalized? Most Democratic politicians go out of their way not to antagonize people of faith. The Democratic Party’s most reliable constituency is, in fact, churchgoing Black women.

It is sadly true that in our polarized and increasingly secular culture, politics is now likely to determine even one’s religious allegiance.
sharetweet

I don’t suppose I should have been surprised by how almost comically hyperbolic the survey questions were. After all, the outside envelope of the survey mailing proclaimed that “there is a war on Catholics and Faith in God.” CatholicVote boasts of its “Battle Plan” to win this war. Part of that plan is to share the survey’s results first with President Trump and his top advisers, and then with lawmakers, journalists, “[r]adio talk show hosts,” and “bloggers.” I have a feeling that Trump and his acolytes will not be disappointed by the survey’s results. But I do confess to being stunned by the advice given to survey respondents by Brian Burch, the president of CatholicVote. In a postscript at the end of his four-page letter detailing how his organization will be “Mobilizing Catholics to Defend Faith and Family in 2020,” Burch explains the secret to the survey’s exactitude and effectiveness. “Please,” he writes, “don’t spend more than a few minutes on your survey. Your first instinctive response to each question will be more accurate and helpful to us as we carry out this November 3rd Project to STOP the radical Anti-Catholic Left from winning control of our government in 2020.”

In this age of the Twitter presidency and the swamp of disinformation on social media, this faith-based organization thinks we need less deliberation and more impulsiveness. No weighing of competing goods, just the pursuit of a winner-take-all politics. Don’t question your instincts, don’t extend the benefit of the doubt to your political opponents, just vote your grievances. Why? Because “the Radical Left Seeks to Ride the Pandemic, Riots and Social Unrest to Win Power on November 3rd,” Burch insists. They “are openly rooting for terrible things to happen to America.” How does Burch know this? He heard “foul-mouthed” comedian Bill Maher say it on TV.

CatholicVote claims it is “primarily focused on educating, registering, and mobilizing millions of pro-life, pro-family conservative Catholics to vote.” Registering and mobilizing conservative churchgoers? Certainly. Educating them? Only if you think a Trump rally is educational.

In the material accompanying the survey, White House Chief of Staff and Tea Party stalwart Mark Meadows makes a cameo appearance, as does Secretary of State Mike Pompeo and Vice President Mike Pence. Burch writes of meeting Pence at the National Day of Prayer and assuring him that millions of Catholics “support the Trump administration and are praying for him.” Piety directed toward a politician is always dangerous, but Trump’s apotheosis as a champion of “Christian moral teaching” gives new meaning to the term “blind faith.”

Politics, as the saying goes, ain’t beanbag. Appealing to voters based on religious identity or values has a long and often inspiring history. What is disturbing about CatholicVote is its apparent cynicism about the intelligence and faith of its prospective audience. The organization seems to think that if every issue is presented as black or white, the pro-life, pro-family Catholic voter will line up obediently at the polls. When it comes to this sort of political zealotry, nothing is sacred. CatholicVote uses cellphone location data to track church attendance and then recruit frequent Catholic churchgoers. That intrusive politicking in church crossed a line for a conservative Catholic like Richard Garnett, director of the program on church, state and society at the University of Notre Dame and a Commonweal contributor. “I don’t want any organization to know where I spend time with friends or where I go,” he told Crux. “It’s almost like they’re getting in the car with me and following me around.”

It is sadly true that in our polarized and increasingly secular culture, politics is now likely to determine even one’s religious allegiance. If more proof of that fact is needed, CatholicVote’s efforts provide it. CatholicVote claims it seeks “to renew our country and our culture, in full communion with, and 100 percent faithful to the Magisterium of the Catholic Church.”

That “profession,” to borrow Henry Adams’s terminology, is what Donald Trump might call smart “branding.” In another age it was called blasphemy.