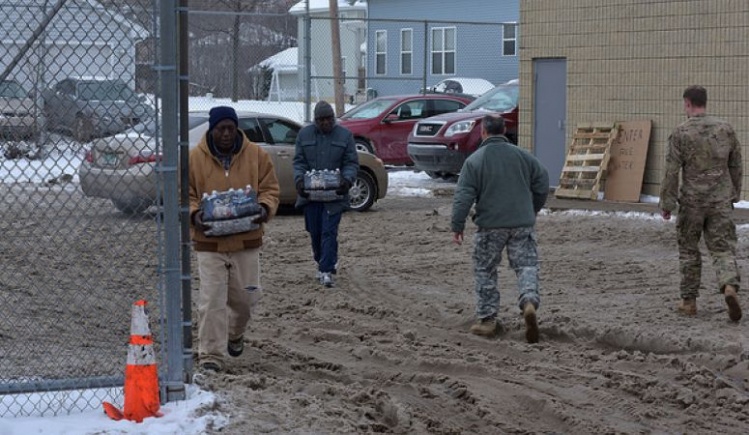 For more than a year, the people of Flint, Michigan, were exposed to drinking water contaminated with lead that had leached from the city’s water pipes. The health risks, especially to children, are potentially catastrophic. Mainly poor and mainly African-American, Flint residents have every right to be outraged. How a city of a hundred thousand could be forced to live under such conditions in twenty-first-century America defies explanation. Or does it? In fact, this was less an unfortunate accident than a foreseeable consequence of our dysfunctional politics. A fixation on slashing government spending on services and infrastructure without regard to the effect on the basic well-being of citizens helped bring this crisis about.

The Flint disaster originated with a cost-cutting directive from state officials to disconnect the city from the Detroit municipal water system. Until construction of a new regional system was completed, Flint’s water would come from the Flint River. Residents of Flint and their local elected officials had minimal say in this decision or those that followed. Like several other cash-strapped Michigan cities—most of them also majority-African-American and decimated by the collapse of manufacturing—Flint was under the oversight of a state-appointed emergency manager. In 2011, Republican Governor Rick Snyder broadened the powers of those managers to cancel or negotiate city contracts; sell, lease, or privatize local assets; and change municipal budgets without local legislative approval. Michigan voters considered this overreach and reversed Snyder’s order by popular referendum in 2012, but six weeks later the Republican-controlled legislature enacted similar (and referendum-proof) rules. It was an emergency manager who approved the decision in April 2014 to draw water from the polluted Flint River. A year later, another emergency manager vetoed a seven-to-one vote by Flint’s city council urging immediate return to the Detroit system.

At the time, it was obvious to the citizens of Flint, as well as to anyone else who cared to investigate, that something was seriously wrong with the city’s water supply. And the situation would only get worse. By September 2015, a local pediatrician would report a significant spike in lead levels in the blood of children, data the state’s health officials ignored. Meanwhile, the poisonous water kept flowing, with one sample tested for lead at nearly 14,000 parts per billion—twice the level legally defined as toxic waste. Complaints from Flint residents were met by the state with a cynical mix of dismissiveness and attempts to shift responsibility to city officials.

Flint officials aren’t blameless. They initially backed the switch from the Detroit system to the Flint River. They also failed to use an anti-corrosive agent to limit the deterioration of the city’s aging pipes. The regional office of the U.S. Environmental Protection Agency was similarly asleep at the switch, responding with little urgency to growing evidence of contamination; the EPA’s regional administrator resigned in January.

But the buck ultimately stops with the state. Under the Safe Drinking Water Act, it is the responsibility of state government to ensure that standards are met. It is hard to imagine that Michigan officials would have allowed such a crisis to go unaddressed for so long in a richer, whiter suburb. Does their inaction amount to environmental racism? Governor Snyder denies this, and it is unlikely that he or other state officials will be held accountable. The burden of establishing discriminatory intent is notoriously high, and in the forty-five-year existence of the EPA, its civil-rights division has yet to make a single such finding.

Governor Snyder devoted most of his recent state-of-the-state address to apologizing for the crisis; now he must tackle the harder job of getting lawmakers to spend whatever is needed to repair or replace the water system. Meanwhile, President Obama has declared a federal state of emergency in Flint, and the EPA has expanded federal oversight. But residents are still largely making do with bottled water.

Several questions need to be answered. Were Flint and its residents illegally deprived of representation while under the supervision of state-appointed managers? And if so, to what extent did race play a role? State stewardship of financially troubled cities need not exclude local officials in decision-making. Even in bankrupt cities, local residents are still likely to know more about local needs than outsiders. And when disaster is the result, it’s the local residents, not the outsiders, who suffer.