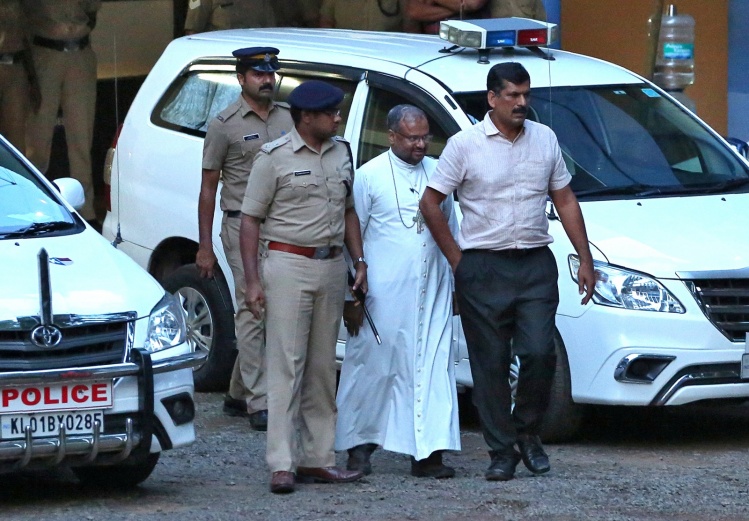 Bishop Franco Mulakkal of Jalandhar, India, is led away for questioning by police Sept. 19 on the outskirts of Cochin (CNS photo / Sivaram V, Reuters)

In a striking departure from business as usual here, a Catholic nun from the South Indian state of Kerala has defied her congregation to publicly accuse a prominent bishop of repeatedly raping her for two years. According to the nun, Bishop Franco Mulakkal of the Jalandhar diocese of Punjab began assaulting her in 2014 during visits to the convent where she was the superior. Repeated complaints and requests for transfers sent to her religious community’s authorities were ignored, as were several letters to other church officials, including the archbishop of Delhi, the papal nuncio for India and Nepal, and finally Pope Francis, to whom she sent a seven-page letter detailing the entire ordeal.

Mulakkal, who is well-connected within both the Indian government and the church, had the nun transferred and filed several police complaints against her, accusing her of conspiring to have him killed and falsely accusing him of indecent acts. Prominent secular leaders came to his defense, including one who was quoted as saying it was well known that the nun was a prostitute and that she herself should be arrested for making false accusations.

Although the nun filed formal charges on June 29, the police took no action either to investigate or arrest the bishop. Exasperated, on September 11, she and a group of nuns, priests, and lay supporters began a sit-in at the High Court in Kerala, demanding his arrest. Partly because of the novelty of seeing nuns and priests protesting in their habits and clerical garb, the demonstration caught the attention of the media and created a sensation across the country.

Reacting sharply to the adverse publicity, Kerala’s Catholic bishops’ council criticized the public protest, saying that the nun’s actions had “crossed all limits.” Her religious community, the Missionaries of Jesus, issued a stinging statement in which they revealed the nun’s name and shared photos of her, in violation of a law that prohibits any public identification of survivors of sexual assault. In their statement, they declared their unequivocal support for the bishop, accusing the nun of immoral behavior and claiming that an impartial internal investigation into the matter had found her guilty and the bishop innocent. They neglected to say that the bishop himself was in charge of the investigation.

That same day, charges were filed against the nun’s community for revealing her personal details, and a week after that the bishop was finally summoned for questioning by the police. After extensive grilling, he was arrested and jailed without bail. The police have indicated that the charges against him are significant.

In the past few days, the Vatican has temporarily relieved Mulakkal of his responsibilities. More stories have emerged about the extent of his assaults, not only against the original nun but also against at least seventeen others, all of whom are said to have left the order since his transfer to the Punjab diocese. Details of his misuse of power, sexual harassment, and rape are shocking in themselves, but even more appalling is the fact that not only did the Missionaries of Jesus refuse to take action on behalf of one of their own, but they played the lead role in vilifying her, accusing her of conspiring against the church she had devoted her entire adult life to serving.

Not only did the Missionaries of Jesus refuse to take action on behalf of one of their own, but they played the lead role in vilifying her, accusing her of conspiring against the church she had devoted her entire adult life to serving
sharetweet

They also led a campaign to silence her supporters, censuring those who stood with her and relieving one nun of her parish duties. Since the first revelation of these events, the institutional church in India has demonstrated that its chief concern is to protect its image and avoid scandal (sound familiar?). A statement by the Kerala Catholic Bishops Council is a good example:

Whatever the reasons were, the fact that some priests and nuns agitating in the streets giving occasion to the enemies of the Church to attack the Church and the Church authorities and to disdain even the sacraments, has caused much pain to all who love the Church. We hope that the members of the Church and the public will recognize that their action was not in keeping with Christian values, rightful interests of the Catholic Church, and even of the statutes of their Religious Congregation.

Not one word of concern for what the nun had endured, nor any mention of the church standing with the vulnerable and powerless, nor even any acknowledgement of the nun’s charges (“whatever the reasons were”).

It’s worth noting that the nuns and priests who stood with the first victim tended to be those who serve the poor and the dispossessed. Unlike the bishops and the other authorities who ignored or attacked the nun, they don’t have much to lose. Their working lives are on the streets, the slums, the schools and the hospitals; they enjoy neither privilege nor power. Also worth noting: Bishop Mullakal was seen as a powerful figure with the potential to deliver votes, and hence worthy of official support. When, not long ago, a Catholic official from the opposition party was accused of sexual harassment, the full force of the ruling party came out against him.

This sordid episode is yet another example of how far much of the church has strayed from its mission and values. Its first instinct was to protect its own interests, to side with the powerful and to attack the weak. When that failed, the best it could come up with here in India was a tepid endorsement of the judicial system and a feeble assertion about bad apples not spoiling the whole bunch.

A death in India