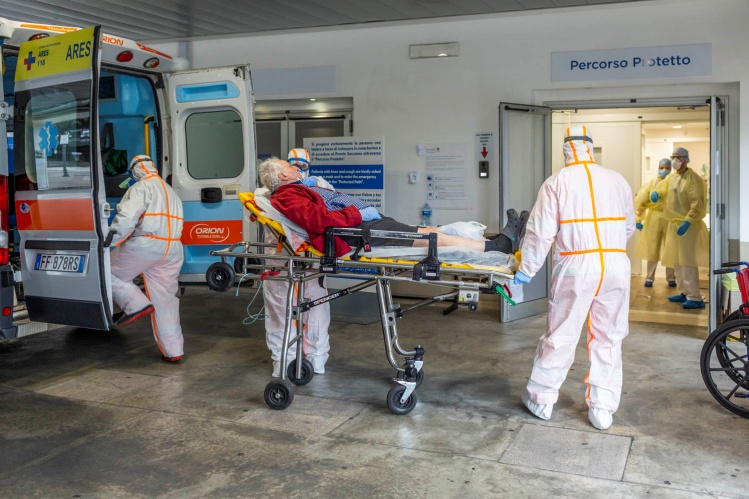 Every day seems like another tipping point in the global coronavirus pandemic, bringing developments we might not have imagined possible just twenty-four hours earlier. March 15, the third Sunday of Lent, saw a wave of unprecedented cancellations of public Masses in Catholic dioceses around the United States. Throughout Europe, churches suspended services voluntarily or were forced by governments to do so. In Rome, after the suspension of Masses and the shuttering of public spaces throughout Italy, Pope Francis live-streamed his Sunday Angelus prayer and early-morning Mass from his residence. He announced that Holy Week and Easter services would be held without a congregation. Later that day, he walked the empty streets to the Church of St. Marcello, where he prayed before a crucifix that was carried through the city in a weeks-long procession to ask God for relief from the Great Plague in 1552. That evening, authorities announced that nearly 25,000 Italians had been infected with coronavirus since February 24, and that about 1,800 had died—368 in just the previous twenty-four hours. Images of Italian health workers collapsing under the strain of treating so many who’d become sick filled news sites and media feeds.

As Catholics we know we are not truly cut off from one another: our spiritual communion is not compromised by these new and temporary physical constraints.
sharetweet

Meanwhile, reports showed that coronavirus infections and deaths around the world were rapidly rising, including here in the United States. But no matter: President Trump began an emergency press conference by celebrating the Federal Reserve’s announcement, “on a Sunday no less,” that it was slashing interest rates to zero percent. Then he lashed out at the “fake press” for its reporting on a virus-testing web app the administration had vastly oversold, and finally abandoned the rostrum to let Vice President Mike Pence and other officials handle questions about the crisis. (“I don’t take responsibility at all,” the president had said two days earlier in response to a question about the country’s obvious lack of preparedness for a pandemic; this would be a fitting epitaph for his presidency.) By nightfall on March 15, New York, Chicago, San Francisco, and other cities were imposing increasingly severe restrictions on public gatherings—closing schools, restaurants, and other businesses, and thus fundamentally changing day-to-day life for millions of people, likely for many weeks to come. Even more serious measures were soon being considered, including wide-scale sheltering-in-place and regional lockdowns.

With the Trump administration having recklessly downplayed the threat for so long, then failing so utterly to implement protocols for testing, tracking, and treatment, the United States faces an exponential jump in cases. Hospitals are in danger of being overwhelmed, and in more dire scenarios, deaths could number in the millions. Society’s most vulnerable are, as ever, the more likely to suffer: the elderly, the poor, the homeless, those whose health is already compromised. Within a matter of days the pandemic exposed the inadequacies of our health-care system, the inequities of our economy, the insecurity of employment, and the fragility of financial structures. It has underscored the real dangers of unstable presidential leadership and a dysfunctional administration incapable of devising a coordinated federal response. It may test our understanding of the freedoms we take for granted as Americans. It will likely demand the kind of collective sacrifice not seen since World War II.

It will also challenge, in an elemental way, how we live in society with one another. We are being asked to distance ourselves from our colleagues and friends and neighbors, to limit or avoid basic interactions and stay away from the places where we normally gather. This includes, of course, participation in liturgy and every other kind of religious practice requiring congregation. As Lenten observances and Holy Week services are cancelled, we face the prospect of celebrating Easter without the joyous company of others. Yet as Catholics we know we are not truly cut off from one another: our spiritual communion is not compromised by these new and temporary physical constraints. And in the weeks and months to come, we can keep in mind the words that Paul addressed to the Romans, words from the second reading of the third Sunday of Lent, March 15: “We boast in hope of the glory of God. And hope does not disappoint, because the love of God has been poured out into our hearts through the Holy Spirit who has been given to us.” That Spirit sustains us through every kind of ordeal, including the one we face now.