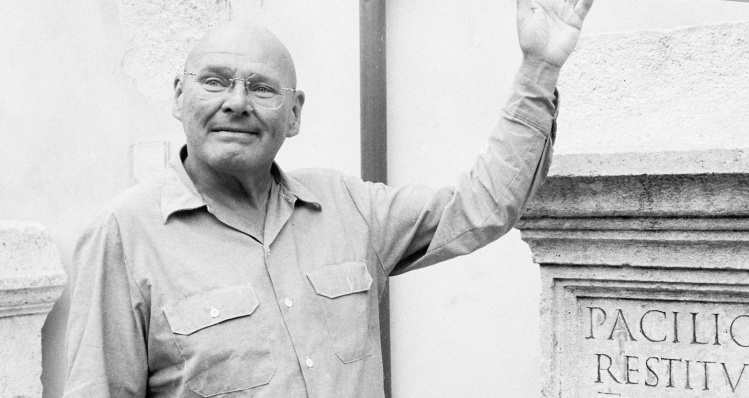 Reginald Foster, OCD, the celebrated Latinist who died in December, committed one act of civil disobedience in the course of his duties for the Vatican. Tasked with making the official Latin version of a text written in Italian or Polish by Pope John Paul II, Reggie came across a phrase referring to Latin as a “dead” language. He just couldn’t bring himself to translate that. So he successfully proposed substituting the adjective “ancient” instead.

To conscript Latin to confirm its own demise was existentially unacceptable to Reggie. His life’s work was communicating the language’s vitality to generations of students, including me. I spent the better part of three summers in Rome, participating in his famed Aestiva Romae Latinitas, which was held in the basement of a Catholic elementary school up the Janiculum Hill near San Pancrazio. The class was not for the faint of heart: it required six hours a day, six days a week of sight translation while seated at a child-sized desk in an overcrowded auditorium with no air conditioning and fifty other sweaty students in Rome’s sweltering June and July. A weekly ludus domesticus (Reggie called it “home play” rather than homework) took about five hours to complete. Sundays were field-trip days: after meeting at the crack of dawn at Termini train station, the class set off on public transportation for Pompei, Ostia Antica, or Hadrian’s Villa, where we would translate sheets of text that Reggie had prepared specifically for each weekly destination. The entire experience was mesmerizing, exhausting, and just marvelous.

Why did Reggie love Latin so much? As every article written about him attests, he was a deeply disciplined Catholic monk, sleeping only a few hours a night on the floor of his bare cell at the Teresianum. He was also a great eccentric, eschewing his religious habit for garb more customarily found on a Maytag repair man because he felt that current working-class attire better reflected the original purpose of the habit in today’s world. So it can be tempting to reduce his love of Latin to pious instrumentalism serving Catholic theology, on the one hand, or an arcane hobby, like collecting train timetables, on the other.

But Reggie never trivialized Latin by treating it as a mere hobby. He always insisted on the language’s intrinsic value. Furthermore, as he made quite plain, he did not have much use for contemporary academic theology. But that does not mean that Reggie had no theology himself. As I reflected on my experiences in the class, I began to see that his view of God’s relationship to human beings was encapsulated not only in the Latin language, but also in the way he taught his summer course.

In Latin, as in Christian anthropology, law serves freedom, not the other way around.
sharetweet

Let’s start with English. Because it is a largely uninflected language, the meaning of an English sentence is determined by word order: meaning runs in one direction. That one-directionality of meaning has implications for how we experience time. We English speakers tend to imagine ourselves moving rigidly in a single line, from the past through the present toward the future. By contrast, Latin is a highly inflected language, so the meaning of a sentence is determined not primarily by word order but by the endings of the words. In English “man bites dog” means something different from “dog bites man”—word order is everything. But in Latin, “vir mordet canem” means “man bites dog”—but so does “canem mordet vir” and “mordet vir canem.” Studying Latin suggests that structure and order are valuable not for their own sake, but for the way they engender freedom. The rigor of Latin’s system of inflection creates a certain liberty of word placement without sacrificing clarity of meaning. That frees up new possibilities for beauty in both poetry and prose. In Latin, as in Christian anthropology, law serves freedom, not the other way around.

Latin’s inflections also enable us to draw together the beginnings and endings of sentences in ways foreign to the experience of English speakers. So the first word and the last word of a complex Latin sentence may be joined together as subject and verb. If an English sentence is more like an arrow moving relentlessly through space, a Latin sentence is more like a set of nesting Russian dolls or a chiastic pattern of A B C D D’ C’ B’ A’. Reggie taught us to start translating in the middle and move to the edges. Nothing is left behind. Everything is gathered in and recapitulated, just like in salvation history. God wills to save us all together, not only the last bitter remnant of us.

In teaching his summer classes, Reggie didn’t merely teach us to translate Latin. He also encouraged us to think Latinly. By conducting the class in Latin, by repeating a sentence slowly so that we would absorb its packets of meaning, he reprogrammed our expectations of sentence patterns to loosen the vice grip of English linear progression. As I went through the summer program, I found that this linguistic reprogramming precipitated a corresponding theological reprogramming. It allowed me, for example, to understand better what Augustine meant in book XI of the Confessions when he said that unlike time, in which one possesses mere slivers of one’s being in succession, eternity was marked by possessing all of one’s being at once. Non autem praeterire quicquam in aeterno, sed totum esse praesens. An English sentence progresses like Augustine’s understanding of the parade of time, each word’s meaning succeeded and replaced by the next. In contrast, it’s easy to imagine a Latin sentence as a symbol of eternity, a bowl gently holding all its meaning together at once.

Thinking Latinly makes the past and the future relate to one another in a more intimate manner. It also makes the people of different eras more relatable to one another. Over the course of a week in the summer program, we were exposed to classical prose, classical poetry, medieval theology, high Renaissance Latin, and contemporary Latin. Reggie considered all the authors of these texts to be part of the community of Latinity, along with the unnamed and long dead illiterate prostitutes and servants who spoke Latin in ancient Rome. Latin wasn’t the mark of an elite cadre; it was the language of a vibrant and varied swath of humanity. Reggie had no patience for those who wanted to use Latin as a weapon of exclusion in the Church or in the academy.

In fact, Reggie viewed Latin as a point of connection. As his fame grew, people came from all over the world to take his summer class. Devout Spanish seminarians in soutanes sat next to agnostic graduate students with purple hair from New York and Berlin. High-school Latin teachers from the Midwest mingled with American expatriates living in Rome. We had nothing in common with each other. But Reggie forged us into a community of learning, which was built on the cultivation of empathy.

For example, Reggie was well known for assigning agnostic students sentimental passages of religious devotion, while tasking pious Catholics with the bawdier passages from Plautus. Some people thought this was a mischievous amusement. But I came to see it as an instantiation of his moral worldview. We all quickly learned that making sense of unedited texts from difficult Latin authors required us to step imaginatively into their shoes; we needed to understand what they wanted to say and why, in order to figure out what they actually said. But most of us didn’t think we needed to extend the same courtesy to our contemporaries, especially if they spoke our language. Because we understood their words, we assumed we grasped their identities. Over the course of the class, Reggie showed us that we were wrong to do so. Empathy, mediated by Latin, can be both necessary and sufficient to bridge secularism and soutanes. In Latin just as in theological ethics, love of neighbor goes together with love of God.

Reggie died on Christmas Day, which seems beautifully fitting to me. He really was a Christmas Catholic, because he celebrated all that is good about God’s creation, whether found in Christian sources or appropriated from elsewhere. And of course the Church’s celebration of Christmas absorbed and transformed Saturnalia, the most popular holiday on the ancient Roman calendar. It was joyous and raucous and sometimes sweet. According to Catullus, it was optim[us] dierum—the best of days. Reggie would love it.