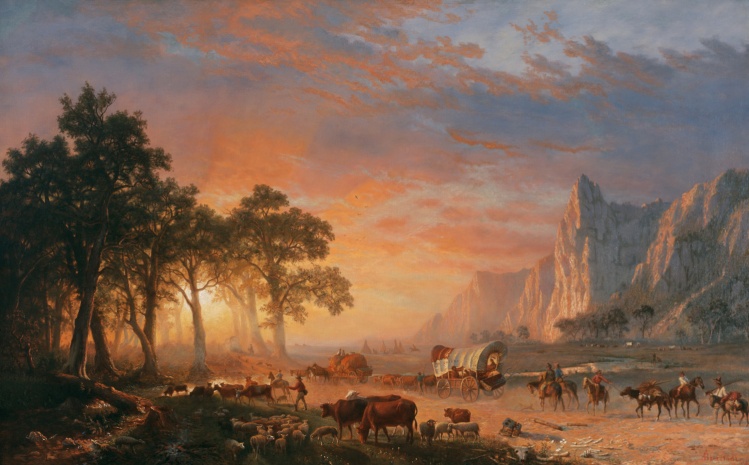 Francisco Vázquez de Coronado wasn’t the first to watch his dreams dissolve under a Western sky—and he wouldn’t be the last. In the 1540s, the brutish and implacable Spanish explorer ranged all the way up to Kansas, losing men and money along the way. Only a few years earlier, the conquistador Hernán Cortés had beheld glimmering Aztec pyramids in Mexico, unsure “whether the things that we saw were not a dream.” Little wonder that a whole generation of men like Coronado could believe stories of lands with silver bed pans, and a king, El Dorado, who robed himself in gold dust each morning only to wash it off at night.

First a Spanish friar, then a series of Indian guides pointed Coronado and his troops north to the golden cities of Cíbola: shimmering castles just out of reach. Más allá, his scouts were always telling him. Behind each mirage lay only cornfields and thatched huts—or worse, infinite plains and deserts that could engulf a man “as if he were traveling on the sea.” Coronado returned to Mexico in disgrace, but not before garroting his guide.

For Texas folklorist and literary critic J. Frank Dobie, twentieth-century Southwesterners were still Coronado’s Children—the title he gave to his 1930 collection of buried-treasure tales told in the borderlands. In a region of contradictions, filthy lucre could exist alongside sacred aspirations: “El Dorado was a man, a lake, a city, a country, a people, a name, a dream—a dream at once absurd and sublime—an allegory of every phantom that the high heart of man has ever pursued.”

In a new popular history, historian H. W. Brands—professor at Dobie’s old stomping ground, the University of Texas—embraces this protean metaphor. Dreams of El Dorado: A History of the American West makes only brief mention of Coronado since, as Brands puts it, “any work of history must have a beginning and an end,” and his begins with the Louisiana Purchase. But the specter of Cíbola hangs on the horizon as Brands charts a course through the history of the western United States. Roughly chronological, the book’s fifty-four short chapters cover most of the major figures and places: Lewis and Clark, the Alamo, the Gold Rush, the Oregon Trail, the Battle of Little Bighorn, the Transcontinental Railroad, the National Parks.

Brands describes landmark events not just as they happened but as they were experienced—by men and women, whites and blacks, Anglos and Hispanics, cowboys and Indians.
sharetweet

A truly literary history eludes most working historians. Their books are too often weighed down by specialist jargon, and they know that neglecting scholarly trappings—extensive footnotes, name-checking fellow historians—means risking professional irrelevance. It is nearly impossible to reach that most coveted literary destination: a serious argument delivered with a light touch.

In this, Brands is singularly successful. In addition to a sense of prose rhythm, he has a knack for the right phrase, which he puts to sometimes shocking effect. We learn, for example, of the “ghoulish tide of frozen flesh” that spewed down the Little Missouri River in the spring of 1887, after a brutal winter iced thousands of cattle. His mind’s eye often enlivens a black-and-white era with flashes of color. After a long day on the Oregon Trail, “the last fires were banked, and the firefly glow of the pipes winked out.”

But Brands may be at his best when he steps aside to reveal the poetry of his sources. The book quotes liberally from many of the richest Western memoirs and firsthand narratives, turning familiar historical characters into special correspondents. We hear directly from John Muir, awestruck by Yosemite’s ponderosa pines “waving and singing in worship in windstorms.” Chief Joseph reports the words of the Nez Pearce, as they defy General Oliver Howard’s orders to move onto a reservation:

“You are an impudent fellow,” Howard said. “I will put you in the guardhouse.”

Brands makes a narrative choice to describe landmark events not just as they happened but as they were experienced—by men and women, whites and blacks, Anglos and Hispanics, cowboys and Indians. This might seem an obvious approach in 2019. But there’s nothing straightforward about synthesizing a region as vast and diverse as the American West—and all such attempts inevitably collide with the bête noire of American historians, Frederick Jackson Turner.

In 1893, while most U.S. historians looked eastward to European scholars, Turner insisted that the key to American history lay out West. Even in colonial times, the Westward-moving frontier had served as a “pressure valve,” siphoning off rowdy young men with the promise of cheap land. As buffalo herds and Indian tribes gave way to white pioneers, Turner claimed, frontier independence fostered America’s egalitarian values and democratic traditions. Turner was profoundly worried, in fact, about the results of the 1890 census: for the first time, population density in the West exceeded two persons per square mile, making it “settled.” “The frontier has gone,” he noted ominously, “and with its going has closed the first period of American history.”

Turner and his students exerted a remarkable pull on the American imagination, but ultimately the “Frontier Thesis” stimulated so much research that it became a victim of its own success. Decades of study revealed that Western mines and cattle ranches were often just as exploitative and profit-pinching as Eastern factories. Business magnates dominated local politics, in hock to distant capitalists. Global demand for commodities like beef and beaver pelts spurred development more acutely than the individual initiative of hardy pioneers. Upon closer inspection, frontier communities hardly looked independent, egalitarian, or democratic—especially for indigenous peoples, Chinese immigrants, or black Americans. The dazzling historical unity promised by Turner—a frontier process that could assimilate colonial fur traders and California grape growers—had evaporated.

By the 1980s, Western historians were looking to do without the old frontier concept. They turned away from capstone events like the Alamo and toward the “lived experience” of groups that had been excluded from Turner’s brand of history. The result was a more complete but less cohesive picture of the American West. Books on black cowboys, Mexican merchants, indigenous activists, and white suffragettes proliferated—but how could this diverse cast be brought back onto the same stage?

As historians searched for new organizing principles, the thirst for a better life appeared to be a persistent, even inescapable theme. Tribes spilling onto the plains in search of buffalo; forty-niners panning for gold; homesteaders hunting for their 160 acres. But the quest for resources was tinged with violence—nearly everyone in the West experienced fraud or expropriation as perpetrator, victim, or both. In the words of historian Patricia Limerick, the West was a “place undergoing conquest and never fully escaping its consequences.” Of course those words could be applied to many places—a fact that the so-called New Western Historians were happy to concede. Where Turner saw a uniquely American process, they aspired to tease out universal themes of oppression and greed from whatever had happened in the territory that stretched from the Mississippi to the Pacific.

The West was a “place undergoing conquest and never fully escaping its consequences.”
sharetweet

Brands owes more than a few debts to this sea change in Western scholarship. He retells events from multiple perspectives, highlighting ironic contradictions. Westerners vaunted their independence, but depended on federal power for security and development. Whites fought Indians—using Indian auxiliaries. People went West to get rich, but just as often lost everything. Above all Brands emphasizes “the simple but ineluctable theme of violence in the history of the American West: of humans killing one another in the struggle for control of Western resources.”

Eager to shed the triumphalist, even racist overtones of the Frontier Thesis, Turner’s critics have sometimes been too willing to abandon the symbolic power of the West to filmmakers and pulp novelists. Revisionists often avoid familiar episodes altogether; when they do cover a classic event, the result feels more like a takedown than a reappraisal. Brands avoids this trap. He recognizes that America’s affinity for the West, while not uncomplicated, is itself a profound historical reality. “In the American mind, the West was not so much a place as a condition; it was the blank spot on the map on which grand dreams were projected,” he writes.

Rather than simply debunking these dreams, the book demystifies them, while recapturing some of their human drama. Anyone who’s ever paddled or hiked in the West, for example, will be gripped by Brands’s treatment of John Wesley Powell. The Civil War veteran navigated the entire Grand Canyon with a fleet of wooden rowboats—despite having only one arm. Brands may not break much new ground, but he does retell some great stories that deserve to be remembered.

This elegant case for the continuing interest of Western history makes one of the book’s other conclusions rather perplexing, however. “As the West passed from dream to reality,” Brands writes, “it became more like the East, until nothing significant distinguished the one from the other.” With the end of the “organized violence” of the Indian wars, the West, “in its historical sense, was no more.” As Turner closed the Frontier, so Brands closes “the West” around the end of the nineteenth century.

This may seem plausible from Brands’s perch in Austin—which has been radically transformed by development in recent years—but it hardly rings true in many of the places central to his book. The Air Force tests missiles in the same deserts where Coronado dragged his canons; Nevada ranchers trade bullets with federal agents over grazing rights; and Chief Joseph’s descendants are still fighting to keep salmon fisheries guaranteed to them by treaty in 1863. The verdict of one old veteran of the Coronado expedition, recalling his comrades, may describe today’s Westerners just as well: “Granted that they did not find the riches of which they had been told, they found a place in which to search for them.”