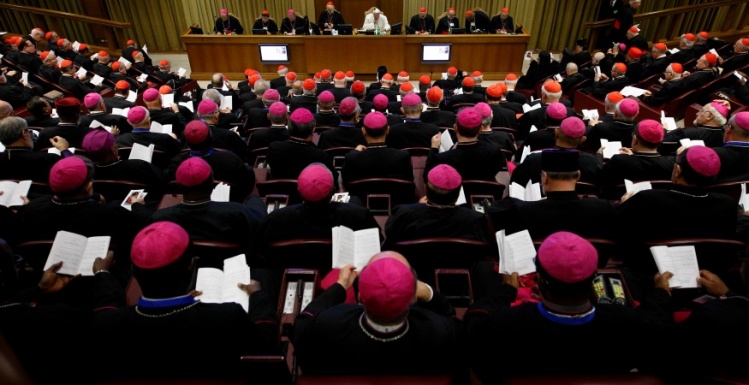 ROME—The Holy See Press Office has taken to holding two-part press conferences, which is great if you want to hear more voices explaining what’s happening inside the synod hall, but not so great if you want lots of time for Q & A. Yesterday was one such presser. First we had reports on the synod fathers’ various interventions, and then we heard a couple of “fraternal delegates” to the synod—that is, representatives of non-Catholic religious communities.

So, what’s happening inside the aula? Discussions are becoming “more emotional,” according to one Vatican spokesperson. There’s been a slight shift from earlier interventions. The synod fathers are hearing about a very wide range of issues, including Humanae vitae, violence between Christians and Catholics (was this a reference to Ukraine? Unclear), the suffering of childless couples, adoption, intrafamily violence, families displaced by migration, care of the elderly, who often suffer isolation and a feeling of uselessness that leads to suicide, families torn by sexual abuse, “the martyrdom of silence in many families where incest has taken place.” The synod fathers also heard interventions about sexual education. One urged the church to resist the dominant, “disastrous” secular model of sex-ed. It should present its teachings as a pathway of love, not sin.

Some synod fathers spoke at length about Pope Francis’s reform of the annulment process (it’s speedier now, and less expensive). Others shared personal experiences of ministering to couples, recounting the experience of being formed by the husbands and wives they had set out to form. It’s easy for bishops to be drawn into the sense of being in control, one synod father said in the aula, as though they are the only ones to impart knowledge. But, he continued, ministry with couples always involves mutual enrichment.

At the heart of the synod, according to one participant, is human sexuality. He acknowledged that most bishops don’t know how to talk about it because they’re celibate. This is why married couples are essential to the discussion. And indeed, the synod fathers heard from some—Sharron Cole, a former board member of a natural family planning organization, even pressed them to reconsider Humanae vitae.

Its prohibition against non-NFP contraceptive methods has “provoked massive dissent,” she told the synod.

Many Catholic married couples have made their own decision in conscience about how to exercise responsible parenthood which may mean the use of artificial contraception. For some, this has meant leaving the church. Others remain but often with a sense of unease.

As an ex board member of Natural Family Planning, I know that this method of contraception permitted by Humanae vitae is an effective method for motivated couples. However for many couples, the method is simply not practicable –they may hold multiple low-wage jobs, have mental health problems, or struggle for diverse reasons. Every family has difficulties which might lead them for a period of time to use artificial contraception in the interests of responsible parenting. Marriage naturally leads to a desire for children which is a biological imperative and a great grace of the sacrament. In my experience, very few couples suppress this desire with its constraints tending to be the couple’s resources to cope, not selfishness.

In response, according to Cole, the church has either pushed for better catechesis or ignored the dissent. But “this paralyzed status quo” must end, she said. “It will take not more catechesis but rather listening with deep empathy to restore the credibility of the church in matters of sexual ethics. The time is now for this synod to propose that the Church re-examine its teaching on marriage and sexuality, and its understanding of responsible parenthood, in a dialogue of laity and bishops together.”

The question of Communion for some divorced and civilly remarried Catholics came up again, but it was “not a dominant topic.” Does the church “do nothing…or go the penitential way?” Or should the bishops be “prophets in the annunciation of the Gospel and going against the mainstream.” At the press briefing, Metropolitan Stephanos of Tallinn and All Estonia, a fraternal delegate to the synod, gave a rather moving explanation of the way the Orthodox handle Communion for the divorced and remarried. No one gets married planning to be divorced, he said. Couples married with the idea of being together for eternity. “But there are moments when the love that keeps a couple together changes,” he said. Sometimes they start destroying one another instead of helping one another. The Orthodox consider such a situation a condition of sin, and a bishop can resolve the problem by dissolving the marital bond. This provides the chance for a person “to rebuild himself or herself—which is a penitential moment,” according to Metropolitan Stephanos. This is why the first marriage rite is “triumphant,” and the second penitential. “For the second ceremony, they really need to face the truth,” he said.

In small-group discussions, Metropolitan Stephanos continued, he has seen the Orthodox idea of oikonomia being introduced “very gradually.” This means understanding that “there is the rigor of the doctrine,” but that people have to live it, and that means figuring out different approaches to differing situations. “Humans aren’t robots that we put in a container and order to march in one direction,” he said.

Obviously there remains a good deal of disagreement about how to handle the question of Communion for remarried Catholics—and the answer may be not to handle it at all, but to kick it to a study committee after the synod draws to a close next Sunday. That idea has been mentioned a couple of times at the press briefings. That’s how Pope Francis handled annulment reform, which was much discussed at last year’s synod. My money is on the committee solution to this issue too.

Anglican Bishop Timothy Thornton, also a fraternal delegate to the synod, emphasized that there is no neat distinction between doctrine and pastoral practice. “Pastoral work is sometimes the most difficult work you can do,” he continued. Dialogue is essential to this process. And that’s precisely what he’s seen during this synod. In his small group, Bishop Thornton explained, there’s one person who thinks very differently from him, and they’ve gone out of their way to have conversations throughout the synod. Perhaps that’s one measure of its success.