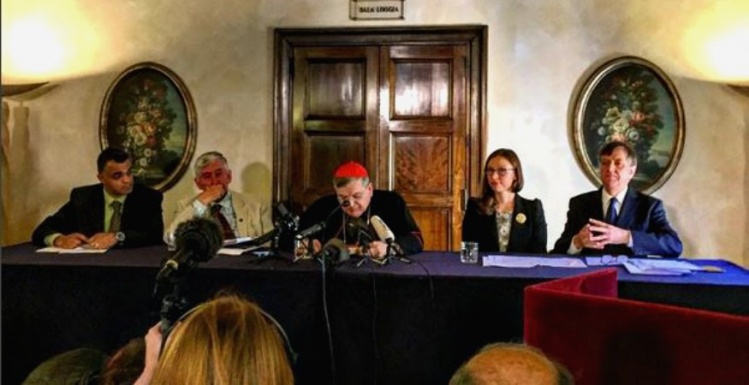 ROME—The bells of St. Peter’s tell me that it’s 8 a.m. The traffic on the Via di Porta Cavalleggeri, the six-lane thoroughfare that bends along the Vatican’s southern wall where it meets Paul VI Audience Hall—where synod meets—tells me that it’s rush hour. The calendar tells me that nearly two weeks of this General Synod on the Family are in the books. All anybody wants to tell me is that they have no idea whether, when the whole shindig wraps next Sunday, the bishops will have anything to show for it.

We the media honestly have no idea. We learn what we learn from interviews with synod fathers, from three-minute speeches some release to the public, from near-daily Holy See press briefings, which sometimes feature a bishop or two, and satellite press conferences that may or may not actually be press conferences.

I’m thinking of the one called by Voice of the Family, a pop-up activist supergroup intent on holding the line on any and all church doctrine and discipline regarding the family. Somehow they got press credentials for last year’s Extraordinary Synod on the Family (as did several other activists); this year, it seems, not so much. Yesterday morning VOF managed to fill an upper room at the Hotel Columbus, just off St. Peter’s Square, with a bunch of journalists hoping to catch some news from the headliner: Cardinal Raymond Burke. The cardinal spent much of the 2014 synod, and the year between that meeting and this one, resisting any change in church practice. So, as expected, when reporters had finished sitting through the undercard—which presented so close a reading of the synod’s working document as to determine that, in the words of one speaker, one of its paragraphs constituted a “direct attack on parental rights” that is “opposed to Catholic teaching”—and the main event, which was generally much calmer, they wanted to ask the cardinal some questions.

But the organizers wouldn’t have it.

Because Burke isn’t participating in this year’s synod, the VOF emcee explained, he wouldn’t participate in any Q & A. Reuters tried anyway, and Cardinal Burke politely declined, explaining that, being on the outside of the synod proceedings, he was “unable” to talk about it. Yet that didn’t stop the cardinal from giving an interview to Il Foglio the other day, in which he commented on Cardinal Walter Kasper’s proposal to allow some divorced and civilly remarried Catholics to rejoin the Communion line (still against it). And when the Tablet of London asked Burke another question, VOF shut down the press conference, or whatever it was, and quickly moved the cardinal out of the room. In fact, Thursday morning Burke recorded an interview about the synod with LifeSiteNews, which VOF posted to their website today. Suffice it to say that was the last time VOF will be be short seats at one of its media briefings.

The Holy See Press Office, meanwhile, won’t have any trouble attracting that crowd, even if the bedraggled media masses would much rather have direct access to the synod proceedings, rather than the summary reports—as workmanlike as they often are—of the daily to-ings and fro-ings. (Actually, while I, like any journalist, even one whose journalistic clock is ticking, would like nothing more than to report from inside the synod hall, or at least to read every speech, I understand why Pope Francis set it up this way. Prying eyes don’t always enhance the frankness of conversations.) So what has emerged in recent days? Communion, Communion, Communion.

I don’t want to give the wrong impression. As I said before, if you’re talking about the family, you’re talking about everything. And Pope Francis has stated that he doesn’t want the synod fathers to get mesmerized by the question of Communion for the divorced and civilly remarried. So, for example, it’s become clear that the synod is deeply concerned with marital formation—pre-Cana preparation for marriage, and post-Cana accompaniment. (Most intriguingly, one synod father called for Laudato si’ to be integrated with church marriage programs.) But it’s clear that a good many bishops here really do want to talk about Communion for the civilly remarried. Some synod fathers have said it’s more or less off the table. But according to yesterday’s Holy See presser, that seems not to be the case. Indeed, according to Vatican Radio’s Romilda Ferrauto, who has been briefing the media on synod proceedings, that topic was raised “again and again.” Many synod fathers said that “the role of church is not only to be faithful” but also “to accompany the people in spite of their failures, without watering down the teaching,” according to Ferrauto. Still others spoke of considering this problem on a case-by-case basis. Specifics were not offered, but it sounds a lot like the Kasper proposal.

The word, “accompaniment,” one of Francis’s favorites, came up again and again. For example, Archbishop Stanisław Gądecki, president of the Polish bishops conference, described his synod takeaway thusly: “The focus on the idea of accompanying the divorced with love and friendship, so that they can understand that they are loved by the church. They are not outcasts.” Still, he made it clear that the Polish bishops are entirely opposed to permitting the divorced and civilly remarried to receive the Eucharist. What it means to accompany such couples while urging them to live as brother and sister wasn’t spelled out.

Whether that line of thinking took hold during subsequent synod deliberations remains to be seen. (Indeed, pastoral responses will be the theme of this third phase of the synod.) But one moment from yesterday’s press conference has stayed with me, as I imagine it has with many bishops. As related by Fr. Manuel Dorantes, Spanish-language assistant to the Holy See Press Office, one synod father told the story of a couple he knew. They were remarried, unable to receive Communion—a fact their child was well aware of. Near the end of Mass one Sunday, while the parents remained in their pew, the child approached to receive the Eucharist—but she didn’t consume it. Rather, she brought the host back to her parents, and offered them some. This little girl knew her parent’s wounds. She sought to bind them. Now where do you think she got that idea?