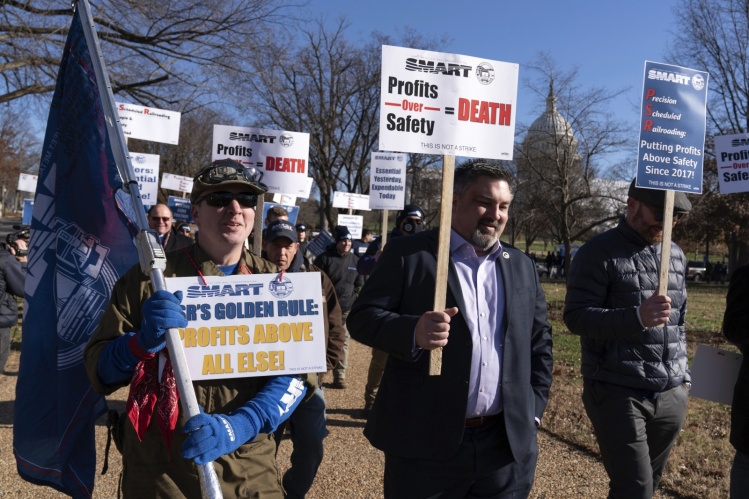 On December 1, at President Joe Biden’s urging, Congress adopted legislation to block a rail strike and bind freight rail workers to a collective bargaining agreement that tens of thousands of them—including the majority of workers in four of their unions—had voted to reject. A last-minute effort to pass companion legislation that would have addressed the disgruntled workers’ demands for paid sick leave (the agreement guarantees only one sick day per year) passed the House of Representatives on a party-line vote, but failed to gain the sixty votes necessary to overcome a Senate filibuster.

In the aftermath of the averted crisis, observers in the mainstream media and business press generally hailed Biden’s performance as a victory for his administration, asserting that he had rescued a fragile economy from a devastating shutdown that would have created a “Christmas catastrophe.” Many railroad workers and their allies disagreed, with one calling Biden’s intervention an “outrageous insult” to the union workers Biden had pledged to protect. Notably, however, the vast majority of union leaders, even those who expressed the most anger about the Senate’s failure to approve added sick days, refrained from criticizing Biden or challenging his stark framing of the choices before him.

While understandable, labor’s failure to criticize Biden for stripping the right to strike from railroad workers was a missed opportunity to engage in the kind of delicate maneuver that the civil-rights movement mastered during the Kennedy and Johnson administrations: pushing a friendly president to do more for his allies than he otherwise might be willing to do.

Labor’s criticisms could have begun with the way Biden falsely framed the crisis as a choice between two options, one distasteful and the other disastrous: either Congress had to force the workers to accept the flawed agreement that his administration prodded their leaders into tentatively accepting on September 15, 2022—an agreement which had since been rejected by several of the unions—or a prolonged rail walkout would plunge the economy into chaos. A strike would threaten to deprive communities of chemicals necessary to ensure clean drinking water and farms of feed for their livestock, Biden declared. The danger was so stark, he insisted, that it would be wrong for Congress to even try to improve the deal by adding sick days to it because “any changes would risk delay and a debilitating shutdown.”

Biden’s framing of the issue was intended to make his chosen course of action seem inevitable when he actually had other options. One would have been to allow the rail workers to make use of the only real leverage they have in their negotiations with the freight carriers—collective action—knowing that he had the power to stop a strike as soon as it truly threatened the larger economy. Even if the workers walked out for only forty-eight hours, they could have demonstrated how essential their work is, educated the public on the problems they face, and strengthened the hands of those in Congress who sought to add sick days to their deal.

Its public-education value alone would have made a short walkout worth some risk.
sharetweet

Its public-education value alone would have made a short walkout worth some risk, for today’s rail workers are—like their predecessors throughout much of American history—serving as the proverbial canaries in the coal mine, alerting us to dangerous power imbalances that threaten many workers who’ve never set foot in a train yard. In reality, the sick-day issue is only the most obviously unjust manifestation of the broader problem with which they have been grappling. They have experienced the wholesale reorganization of railway labor practices over the past decade with management’s introduction of “precision-scheduled railroading” (PSR). PSR has allowed railroads to cut staffing by 30 percent in six years while increasing freight tonnage, thereby doubling profits. In the first six months of 2022 alone, the largest freight carriers reported $10 billion in stock buybacks and dividends. With staff cut to the bone by PSR, the railroads cannot tolerate worker absences without delaying and snarling traffic. Resiliency has been squeezed from the system in the interest of profits. A version of what railway workers are experiencing is increasingly common in all sorts of workplaces. Unfortunately, the railway workers never got an opportunity to name that problem for a public that might well have supported them. Nor were they given a chance to demonstrate their collective power, a demonstration that might have had a salutary effect on workers in many other settings.

If any president could have been expected to let a walkout highlight the exploitative system under which railway workers currently toil, it was Joe Biden. More than any previous president, he knows firsthand that railroads have held the upper hand in negotiations ever since Congress enacted the Railway Labor Act (RLA) in 1926. When the railways stiff-armed unions during negotiations in 1992, forcing a national strike and lockout, Biden was one of only six senators who refused to go along with forcing a bad deal on the workers. He knew that the rail companies never negotiate in good faith, always relying on political leaders’ inability to tolerate a strike as their ace in the hole. “We need to restore a measure of balance to these negotiations,” Biden said then. Yet the imbalance persists, and Biden knows it. It is that imbalance that allowed the railroads to impose the inhumane PSR model in the first place.

To be sure, Biden’s response to the recent crisis is perfectly understandable in political terms. He would have undertaken a significant political risk had he allowed a strike to begin even if he planned to rein it in within days. Moreover, that risk would have been magnified by his self-identification as a union ally. Make no mistake, Republicans like Sen. Ted Cruz, who delightedly got to Biden’s left by trying to add sick days to the deal that Biden urged Congress to pass unchanged, would have been the first to hang responsibility for the strike around the president’s neck. Exactly those sorts of dangers tend to make presidents cautious with their political capital. Yet such caution can easily harden into rigid risk-aversion when they feel no pressure to risk that capital, and in this case, labor made it easy for Biden by focusing its criticisms on the railroads and Senate Republicans.

Labor’s approach is also understandable. Whatever disappointment unions might feel about Biden’s handling of the rail crisis, he is the most powerful ally labor has had in generations. He has done a lot for workers on a wide range of issues, and unions naturally do not relish criticizing a powerful friend. But, as history shows, the criticisms social movements make of their friends—if handled responsibly—tend to bear the richest fruit. The civil-rights movement repeatedly demonstrated as much in its often tense relations with its friends in the Kennedy and Johnson administrations.

Some unions and commentators now call for Biden to fix the rail deal by issuing an executive order mandating that railways with federal contracts grant sick days. That poses another question: Will the labor movement, in the posture of a supplicant, quietly lobby him to do this, or will it approach him as an indispensable partner who is willing to publicly challenge him to do the right thing? The answer to that question will help define labor’s horizons of possibility over the next two years.

Ultimately, the degree of deference the rail crisis revealed in labor’s relationship with Biden is limiting for both parties. If Biden hopes to accomplish the ambitious goals he originally set for his administration and to win reelection for himself or a worthy successor, he will need an energized labor movement pushing him to deliver for them and for all workers, one willing to cause disruption with strikes when necessary. For their part, if unions want their friend to fulfill his potential and become the president that the country’s workers desperately need, they shouldn’t hesitate to make him uncomfortable when the situation requires it.

The labor movement is facing a moment of unique opportunity. Union favorability polls are higher than they have been in a half-century; young people are leading organizing drives at Starbucks, Amazon, Apple, Google, and more; workers are reclaiming labor’s most reliable lever of power—the strike—which had grown rusty since the 1980s. Nonetheless, the obstacles facing unions are daunting, thanks in part to aging and decrepit labor laws like the RLA. At this crucial juncture, workers need a Biden who is not content to be called “the most pro-union president since FDR.” They need a president who is all in. Whether Biden becomes that president will depend in part on how hard his labor friends push him.

Joseph A. McCartin is the executive director of the Kalmanovitz Initiative for Labor & the Working Poor at Georgetown University, and vice president of the Labor and Working-Class History Association.