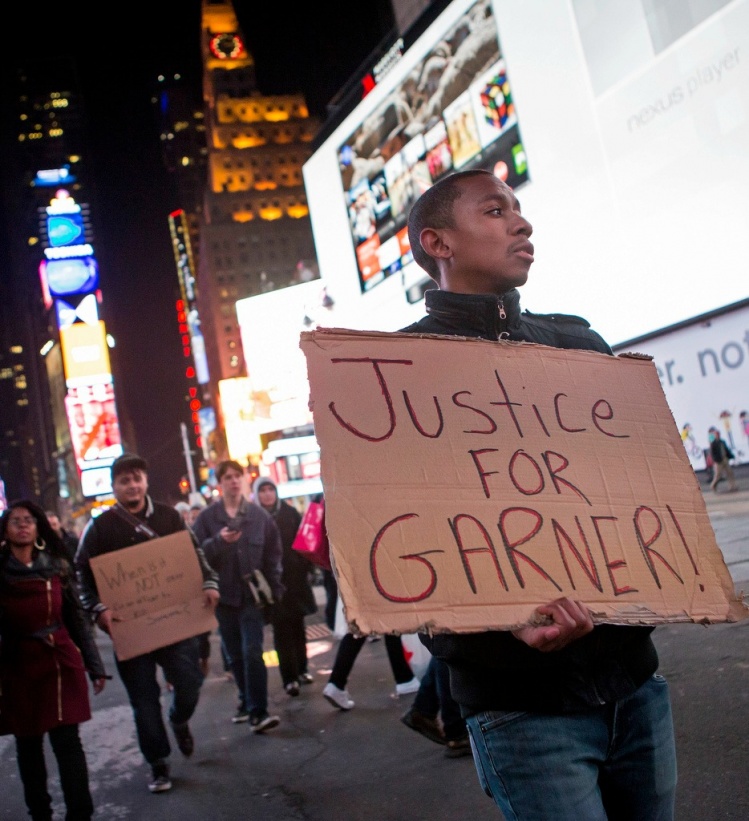 As New Yorkers know and others may have heard—if you were reading social media, watching cable news, or perhaps just tuning in to the Rockefeller Center tree lighting ceremony last night—New York City saw a clutch of protest marches and demonstrations last night, after the announcement that a grand jury had failed to indict the police officer who killed Eric Garner. More are planned for today.

It was a shocking outcome, even given the frequent failure of grand juries to indict cops (an exception to their otherwise high rate of indictment). As so many have observed, if the details were fuzzy and accounts hard to reconcile in the Ferguson, MO, shooting death of Michael Brown, in this case they were utterly clear. A bystander's cell-phone video captured the whole encounter, including Garner's pleading for breath as officers tackled him and Daniel Pantaleo kept an arm wrapped tightly around his neck. Garner was unarmed; he posed no threat to the the police, or to anyone else, except of course to their sense of authority. His "resisting arrest" was nonviolent. His supposed offense—selling individual cigarettes on the street—was minor. His cries of "I can't breathe!" were clear.

The family of Michael Brown has set a goal for protests in St. Louis: body cameras for police officers, which would capture encounters like the one that resulted in his death and reduce the need to rely on an officer's own account of the details. One thing video evidence has revealed, time and again, is that—hard as it may be to believe—police officers do sometimes lie about their actions in ways that make them look better, when they think no one will know the difference. But the Garner case has thrown cold water on that crusade: no body camera could have captured the incident more clearly than the video we already have, and still no indictment—that is, a jury did not find probable cause for Pantaleo to stand trial for having wrongfully caused Garner's death.

That doesn't mean body cameras wouldn't help in policing the police. But they clearly won't address the common theme in the cases of Brown and Garner's deaths at the hands of police: no indictment, because the prosecutor pretty clearly did not want one. Brian Beutler at the New Republic proposes a practical way to break down the "culture of impunity" that shields cops from answering for the harm they do to people they are sworn to protect.

If prosecutors and police departments are too tightly linked for due process to mean anything, then puncturing the impunity requires breaking the link.

One way to do this would be for citizens at state and local levels, through ballot initiatives, to take the authority for presenting evidence of police misconduct to grand juries out of the hands of local prosecutors. That authority could be handed to publicly accountable review boards staffed with civilian lawyers from within the jurisdiction, or to special prosecutors’ offices.

The point would be to eliminate the conflict of interest that arises—as it did in Ferguson and Staten Island—when local prosecutors investigate the officers on whom they rely for evidence, cooperation, and political endorsements.

...
Instituting systems like this in cities across the country wouldn’t amount to a frontal assault on the vast racial disparities in communities like Ferguson. But it's a concrete goal—one that would give at least some vulnerable communities greater confidence that police wrongdoing will be investigated in an unbiased way. And it would put police on notice that their conduct will be subject to legal review by representatives of their communities who don’t work hand in glove with them.

There's another common thread that keeps nagging me in cases like Brown's, and Garner's, and Tamir Rice—that's the twelve-year-old boy who was shot by cops in Cleveland this week while playing in a park with a toy gun—and John Crawford—the Ohio man who was shot by cops in a Walmart while talking on the phone and carrying a BB gun he had picked up from a shelf in that very store—and Kajieme Powell—a disturbed man shot by police in St. Louis just eleven days after Michael Brown was killed—and Kenneth Chamberlain, Sr.—a man who lived not too far from me, who was shot to death in his home by police who were responding to an accidental alarm from his medical-alert device. And that's a partial list, just the cases that have stuck in my memory. In every case, it seems to me, the police responded by escalating a situation that they might have defused. People died who did not need to die because the cops went immediately for their guns, or dug in and tried to force a balky citizen to submit to their authority.

Heather Digby Parton wrote a blog post yesterday flagging a conversation on Lawrence O'Donnell's show that touched on this problem.

Lawrence O'Donnell featured a very smart discussion tonight which he started off by noting that police officers encounter these sorts of situations all the time and the difference between those that end tragically like Michael Brown and Eric Garner and those that don't is "the better and cooler" judgment of the police.

...O'Donnell went on to talk about police training that includes a responsibility to reasonably retreat in situations where there is nothing at stake in closing in someone. Clearly, unarmed citizens at the top of the list. The only thing at stake there is the officer's pride or desire to punish them in the moment for failing to instantly comply.

Observing that this is a problem only gets you so far, of course; you can't pass a law that says "Police must use good judgment." But you can, for example, try to codify what that judgment might involve, by, for example, forbidding police to use a chokehold on a suspect. And then you can expect them to follow those rules, or face consequences.

In most of the cases I mentioned above, you can find plenty of commentary that seeks to blame the victim for forcing police to resort to deadly force, and not just coming from defensive cops. (In this most recent case, it was left to the lowest of bottom-dwellers to blame Eric Garner for his own death. But they're out there.) Most of it comes from commentators who presume that encounters with the police are as rare and justified and generally low-tension for all classes and races as they are for well-to-do white people (see, for example, John Podhoretz noting that white people get speeding tickets all the time, and therefore know what it's like have "infuriating" encounters with cops). But at what point do we stop making excuses for cops whose hotheadedness, or physical violence, or itchy trigger finger, turns a confrontation deadly? Do we all have to feel personally threatened by police harrassment and unaccountable cops before that "culture of impunity" stops operating with our consent? Or will recent events be the push so many of us need to recognize the threat that already exists? Is what Beutler suggests the best next step, and if so, how do we go about making it happen?