By A. G. Harmon
Arts
Books

Great paradoxes are those that stop, startle, and gain intuitive acceptance well before essential understanding. Take, for instance, the maxim that “the first principle of all action is leisure.” It is something W. C. Fields might have said as easily as Aristotle, the kind of line you take in with a wry smile when you see it in the newspaper or on a sign at your neighborhood pub. But a society already manic over its own amusements can easily miss the point—one that has been articulated many times over the centuries. Aquinas was on to it when he explained that virtue’s essence lay in the good, not in the difficult. And his formulation, as well as that of Aristotle, lies at the root of Josef Pieper’s influential 1952 disquisition on leisure as the basis of culture. How can that which makes us uniquely human ever grow and flourish, Pieper asked, when it is constantly trod upon by the plodding boots of toil? Living closer to a time when the Protestant work ethic was more reality than cliché, the German Pieper distinguished indolence and shiftlessness, which are rightly scorned, from the necessary state of free contemplative restfulness that formed the subject of his work. Constant industry not only discredits the still life, Pieper argued, but stifles it. And without stillness, there is no life, at least not a genuinely human one.

Patricia Hampl’s Blue Arabesque: A Search for the Sublime takes the seed of this truth and extends it to the world of art. Drawing on Delacroix, Ingres, and especially Matisse, she uses a common focus of the men’s work, the odalisque—a concubine or mistress—as a means by which to examine the theme of having world enough and time. Along with writers F. Scott Fitzgerald, Katherine Mansfield, and film documentarian Jerome Hill, these painters inform Hampl’s memoir of a life spent actively seeking what she characterizes as a state of “divine nonchalance.” The book is made up of six loosely related essays (“Cell,” “Window,” “Divan,” “Camera Obscura,” “Les Bains Turcs,” “Balcony,” and “Chapel”), each devoted to a separate reflection on an aspect of the state so often captured in the French painters’ art.

In the first chapter, Hampl introduces Femmes et poissons rouges, the Matisse painting that began her ponderings and that illustrates the “looking and musing” that was the essence of her young ambition. The painting portrays a figure in a state of repose—if not an odalisque reclining on a divan, nevertheless a woman lost in thought, staring at the glass of an aquarium, gazing into that small cell of goldfish that harbors color, clarity, and fire, just as the figure herself shimmers within a room of Eastern motifs. Delivered to us by the strange camera obscura of the master’s eye, the vision is at once subject and vehicle. Matisse’s achievement—and Hampl is clear about honoring it as such—lies in making the gaze one with the goal: artist, subject, and audience performing a redundancy of contemplation. It is not unlike the message of a cloistered nun who tells Hampl that the contemplative state is achieved through leisure: “It takes time to do this,” the nun explains. And time-taking is deemed a worthy objective in this book; more than a luxury (though it is that as well), it is a necessity for the kind of seeing to which both artist and hermit aspire.

The author examines the differing objectives of Matisse and Delacroix with regard to their African travels: journeys, taken simply to look and to see, that unite tourist, artist, and pilgrim. With Matisse, Hampl suggests, the art that results is not a matter of capturing the subject, but of expressing what is already within-and not an interior landscape, but the act of seeing itself. As a model she points to Augustine, who suggested another paradox: To know the world, one must first look within. Knowledge begins with the self, and the subject is rendered in terms of its being seen. There is an endearing account of how Matisse as an old man loved to fly in airplanes, to swim through clouds, air, and light as though he were inside one of his own works.

A provocative view of the collector’s role in the contemplative life adds another insightful dimension to Blue Arabesque. Hampl points out that looking—seeing—is a form of taking, and can become a type of craving. In a sense, the collector is taken by the object of his devotion. The late painter and documentary filmmaker Jerome Hill, a son of great wealth (and, like Hampl, a native of St. Paul, Minnesota), illustrates a complementary ambition to that of Matisse. Raised in a family of prodigious art collectors, he provides an example of the artistic mode most representative of sight, most devoted to noting and perceiving. By turning his camera on himself in his most famous documentary (a cinematic memoir titled Film Portrait), he returns to the territory of Augustine. Here, Hampl presents the formidable question: What does the eye see when it beholds itself? For that is the heart of the expressionistic enterprise: to reveal the way of seeing is more important than to capture the thing seen.

Blue Arabesque is not without its flaws. Here and there one encounters the weak argument or unsustainable notion—a vague association between harems and a kind of Woolfean proto-feminism, for example. There is also an occasional scolding of the Occident, with Christendom contrasted unfavorably with Islam and its constant seeking after the heavenly garden. Finally, the passage on Katherine Mansfield, while a well-rendered homage to Hampl’s literary idol, is not sufficiently tied to the larger theme and bears too clearly its origin as a previously published essay.

Yet when Hampl returns to Matisse in the last chapters, the course is assured. The book ends with an engaging account of the author’s trip to Vence, on the French Riviera, to see one of the last and perhaps greatest of Matisse’s creations: not a painting, but a building, the Chapelle du Saint-Marie du Rosaire, a chapel for Dominican nuns completed in 1951. The chapel was the most ambitious project of his life, a masterpiece of his late style—an achievement whose holiness finds its counterpart in the fact that his last model, a nurse named Monique Bourgeois, became a nun in the convent where the chapel is located.

As Blue Arabesque began with a work by Matisse and an old cloistered nun, so it ends with a work by Matisse—this time in three dimensions—and his last model as intercessor. The unity of the sublime division finds a supreme symbol. It seems that the summation of all the traveling, searching, and working that we do is to find a place to stop and be. “To be so at ease in the frantic world, to be so at peace in the presence of beauty,” Hampl asserts, is “a form of love.”

A. G. Harmon teaches at the Catholic University of America. His A House All Stilled (UT Press) won the Peter Taylor Prize for the novel in 2001. 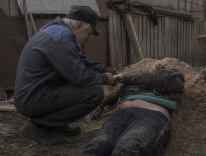