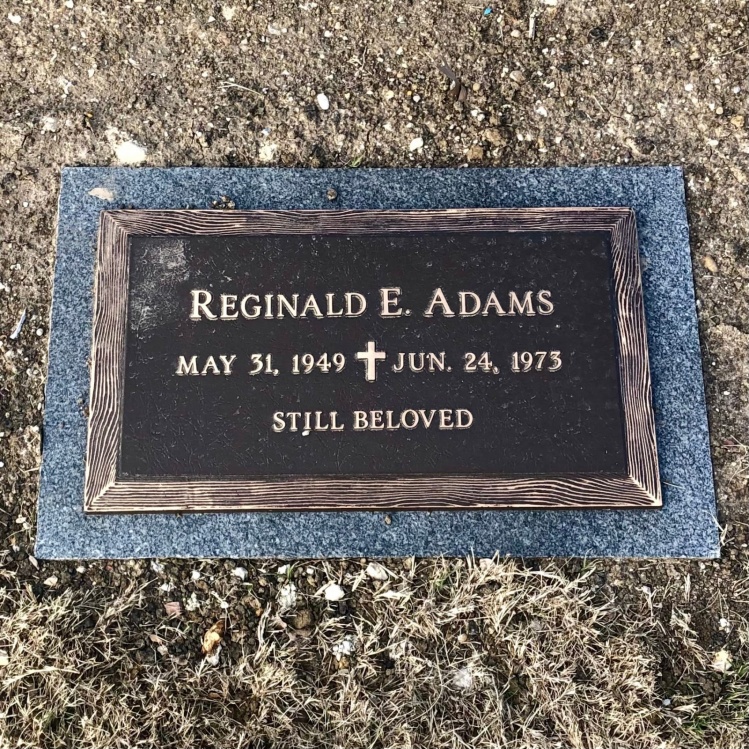 The grave of Reginald E. Adams

It is late morning as I cross the lawns of Calvary Hill Cemetery in Dallas. Looking for the grave of a twenty-four-year-old man who burned to death in a working-class gay bar nearly half a century ago, I pass an inscription chiseled in stone. It reads, “Blessed are the dead who die in the Lord for their works follow them—Apoc 14:13.” I adjust my shades. The words seem to follow me as I walk.

Reginald “Reggie” Adams was one of thirty-two people killed in the infamous fire at the Up Stairs Lounge gay bar on June 24, 1973, an act of arson that was the deadliest fire on record in New Orleans history and the worst mass killing of homosexuals in twentieth-century America. The crime received scant media attention in its day because of the anti-gay bigotry that followed, and it remains officially unsolved. Adams was the tragedy’s only known Black victim. In 2018, I published a nonfiction book on the Up Stairs Lounge fire called Tinderbox: The Untold Story of the Up Stairs Lounge Fire and the Rise of Gay Liberation.  In 2021, I published a follow-up investigation on the religious journey of Reginald Adams. That investigation ended with me standing at Adams’s grave in Dallas, which was then unmarked.

In many ways, Reginald Adams’s trailblazing young life was overshadowed by the circumstances of his passing. In addition to being a sexual and racial minority in the Deep South, he was once an aspiring priest—a factor that played a role in how he was interred. In 1969, at the age of twenty, Adams entered the Jesuit seminary in Grand Coteau, Louisiana, the only Black member of his formation class. He witnessed the burning of a cross nearby after local Jesuits began to integrate their parishes. Adams ultimately declined to take “first vows” with his formation class in 1971 and was instead sent to study at Loyola University in New Orleans.

In the Crescent City, he experienced a personal awakening. Adams abandoned his path to the priesthood and began a relationship with a white Mormon named Regina, who came to identify as transgender. Straddling religion, orientation, race, and gender, theirs was a union almost impossible to understand even among the gay people of the French Quarter.

As an “out” resident of New Orleans, Adams broke another barrier by becoming the first Black customer to drink in Café Lafitte in Exile, a racially segregated gay bar on Bourbon Street. Living in violation of Catholic doctrine, Adams nevertheless did not abandon his faith. He spent Sabbath days with a congregation called the Metropolitan Community Church (MCC) of New Orleans, which conducted worship services that included a communion ceremony. Evicted from their first two locations, the MCC congregation met for a time at the Up Stairs Lounge, which served as a makeshift community gathering place.

Then, within a span of minutes one random Sunday at his favorite bar, Adams died violently in an intentionally set blaze. He suffered third- and fourth-degree burns over 95 percent of his body. Given the condition of the several dozen corpses removed from the bar, the Orleans Parish Coroner urgently needed medical and dental records to identify the victims, and they appealed to local Jesuits for help with Adams. According to several Jesuit sources, a house superior named Fr. Joseph Doyle at Loyola University’s Jesuit residence stepped forward to transfer those files. Through this process, the coroner positively matched Adams to “Body No. 8.” He was exempted from the fate of fellow Up Stairs Lounge victims who went unidentified or unclaimed. Three unknown victims and one identified victim whose family could not be located were buried without markers in a remote potter’s field called Resthaven. The city and cemetery subsequently lost their burial records, and those men still lie in what is now an unkempt field behind a chain-link fence near a storage yard for port-o-lets. But thanks to the mercy of the Jesuits who knew him, Adams was able to travel home to Texas in the care of his mother. The Dallas Morning News called Adams a “seminary student” in its obituary that July, which also noted that he received a funeral at St. James Catholic Church. Hours later, he was buried at Calvary Hill Cemetery, in Catholic soil.

I weep for some time, my eyes pinned to the words “Still Beloved.” I can’t quite articulate why this small change in a Texas field overpowers me in this way.
sharetweet

When I first stood at Adams’s grave in Dallas, the ground was bare, reflecting the history buried with him. Despite efforts by the Jesuits in 1973 to honor their former novice and afford him Catholic death rites, no one took the last step to put a name on his gravesite. Given the biases of the times, it would have been expedient for Church authorities to squelch questions that lingered about being so charitable to a lapsed novice, a transgressor of “natural law” who died unrepentant. And so for nearly fifty years, Adams rested in a kind of anonymity, his presence unknown even to many who eventually heard the Up Stairs Lounge story. I regarded the oversight as a kind of unfinished business, seething with the past and its pain. Following my discovery, a queer-history organization called the LGBT+ Archives Project of Louisiana stepped forward to cosponsor the purchase of a bronze marker for Adams’s grave. Weeks later, I received a voicemail informing me that the marker was in place.

Which is what now brings me back to Calvary Hill. January sun shines honey-colored light on honey-colored grass. Low-flying Southwest airliners buzz the cemetery as they descend toward Love Field. For ten minutes, I search alone in the expanse, seemingly as flat and featureless as all Texas scrublands. When I reach the gravesite, between a pine tree and a small statue of Saint Thérèse of Lisieux, I fall to my knees. I can see the soil, once a bare plot thought to be empty, has recently been tilled. A newly installed plaque reads:

I weep for some time, my eyes pinned to the words “Still Beloved.” I can’t quite articulate why this small change in a Texas field overpowers me in this way. Perhaps, as a gay Roman Catholic like Adams, I relate to the feeling of being perceived as an unwelcome fact. I am a same-sex-married contradiction, a spirit and a body at odds with the canon. After I perish, I wonder if some future regime might try to hush my memory, lest my story be presented as a viable way to live. After the fire, Adams joined untold numbers of Catholics who, like him, rested without acknowledgement of their faiths, their loves, their names. I wonder how many others rest this way. Respectfully, if all of these graves could be marked, it might provide a stunning visual lesson for those who fight an ideological war against a mystery of human nature. Look at all of us, across time.

When I rise, I walk to the nearby statue of Saint Thérèse of Lisieux. She holds a rose bouquet. Thérèse died of tuberculosis, at the age of twenty-four—the same age as Reginald Adams when he died in a fire. She had made a pilgrimage to Rome in 1887 and sat at the feet of the Holy Father. She had cloistered in a convent to “pray for the souls of priests,” knowing their paths to be difficult. She had written an autobiography called Story of a Soul but died too soon to hear it strike a chord. “If a little flower could speak,” she wrote, “it seems to me that it would tell us quite simply all that God has done for it, without hiding any of its gifts.” Today, worshippers visit the Basilica of the National Shrine of the Little Flower in San Antonio.

In the light of this field, I am struck by coincidence piling on coincidence—saint and exile struck down at the same age, both carrying messages for the future, both grappling with the pressure to be holy while called by the Spirit to live uniquely. And I start to pray. Something in me believes it is not mere chance that Thérèse, who celebrated all of God’s little flowers, watches over Adams. For “the little bird… with bold surrender,” she wrote, “wishes to remain gazing upon its Divine Sun.” Something in me understands that Thérèse, in her guardianship, played a role in ensuring that Adams’s gifts and sacrifices would be known today. Isolated from the faith, Adams found a way to continue his praise.

The inscription from the cemetery stone is still in my mind, and I apply it through prayer to Adams’s life: Blessed are you who died in the Lord, Reggie Adams. The Spirit calls you to rest from your labors, for your deeds follow you.

Robert W. Fieseler is a lifelong Catholic and a National Lesbian and Gay Journalists Association “Journalist of the Year.” The author of Tinderbox, he lives with his husband and two kittens in New Orleans.