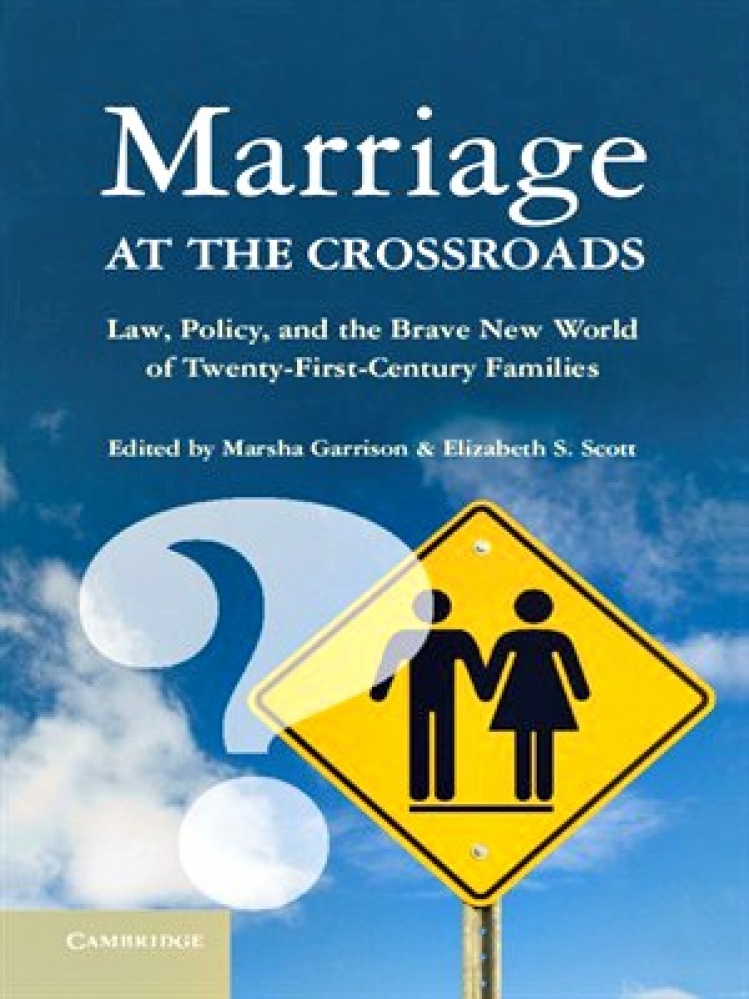 Scholars who study marriage have generally focused on describing how broad changes in our society have led to changes in that institution. Several contributors to Marriage at the Crossroads take this approach, providing a useful if familiar litany of economic, cultural, and legal changes that have altered the meaning and purpose of marriage over recent decades. But what makes this volume fresh and compelling, as I read it, is the story of how marriage itself is reshaping society. It is doing so in two ways: marriage is integrating gay and lesbian Americans into mainstream society; and marriage is fracturing American society along class and educational lines and contributing to rising economic inequality.

Participation in marriage is now legal for gays and lesbians in ten states, and the movement for marriage equality in both federal and state law is gaining support. For many advocates, the inclusion of same-sex couples into marriage represents full social acceptance. Marriage, they argue, will not only make same-sex couples equal but also make their families normal in the eyes of the larger world. And for many same-sex couples, the recognition conferred through marriage is as important as access to its legal rights and tangible benefits. Some anticipate the day when same-sex marriage is just plain marriage.

The perspectives of the legal scholars and sociologists in this volume run the gamut from secular progressive to utopian radical, and their views of same-sex marriage fall within the same range. Most think that the demand for “marriage equality” is part of the larger evolution of marriage from a public and social institution governing family life to a private, egalitarian, two-person relationship based on love and sexual attraction. For sociologist Andrew Cherlin, this evolution has opened the door to same-sex marriage and should be recognized in the law.

To that, legal scholar Katherine Franke essentially says: Hold on. The social integration of same-sex couples into marriage may not be altogether wonderful. After all, she argues, marriage imposes conservative social and legal norms on same-sex couples who will “bend lives toward marriage and its civilizing norms.” This, she believes, may divide the gay community, splitting married couples from others who do not or cannot marry. In short, Franke fears that the legal right to marry will collapse into the social obligation to do so.

Whether or not Franke’s fear is warranted, her view of marriage is well founded. Marriage is a powerful socializing and conservatizing force. In times past, it has served as a central institutional pathway for bringing “outside groups” into the social fold and for bringing “insiders” into closer ties with outsiders who have been discriminated against. Franke cites the extension of legal marriage to newly freed slaves after the Civil War as one example. She might also have cited the even earlier example of religious sects—circuit-riding Baptists and Methodists in the eighteenth century and Mormons in the nineteenth century—who held radical views of marriage and family life but achieved broader social acceptance as they adopted norms of middle-class marriage.

Yet even as marriage integrates same-sex couples into the mainstream, today’s marital patterns among heterosexuals are contributing to a societal economic divide. In the not so distant past, marriage was achievable for nearly all who sought it. High-school graduates and college graduates differed in some respects, but their family formation patterns were nearly identical. Both groups married and reared children within marriage.

This marriage divide also contributes to inequality in opportunities for children. On one side of the divide, we find some households with two married college graduates, each with high earning potential, who invest their time, social connections, and substantial resources in their children. These children are likely to do well in school, go on to college and beyond, and form stable marriages of their own.

On the other side of the marriage divide, we find many fragile families, formed by parents in unstable cohabiting unions or mothers raising children on their own. Because cohabiting parents are likely to break up after a few years, their children are often exposed to multiple disruptions in family, household arrangements, and schooling, according to sociologists Sara S. McLanahan and Irwin Garfinkel. Frequent moves may disrupt children’s learning and make it hard to catch up later on. By the teen years, children may have fallen so far behind that they drop out of school.

These divergent patterns in family formation lead to radically different American childhoods. Children with college-educated and stably married parents grow up in a family, school, and neighborhood environment with all kinds of opportunities for enrichment. Children whose unmarried parents have less than a college degree and may have troubled romantic relationships too often land in an educationally impoverished family and neighborhood environment where educational opportunities are meager and supportive adult attention is in short supply.

In sum, marriage today is like a highly selective college. It is a sign and symbol of personal achievement and social advantage. Indeed, along with higher education, marriage works to select and sort the already privileged into stable parental partnerships that, in turn, transmit and consolidate advantages for their offspring. So the high status of marriage is double-edged; it is increasingly open to same-sex couples who seek its social and legal blessing, but it is increasingly closed to those who, by birth or life circumstance, are unable to find a way into its charmed circle.