A deadly famine is compounded by a lack of foreign aid.
By Regina Munch
Foreign Affairs
Middle East 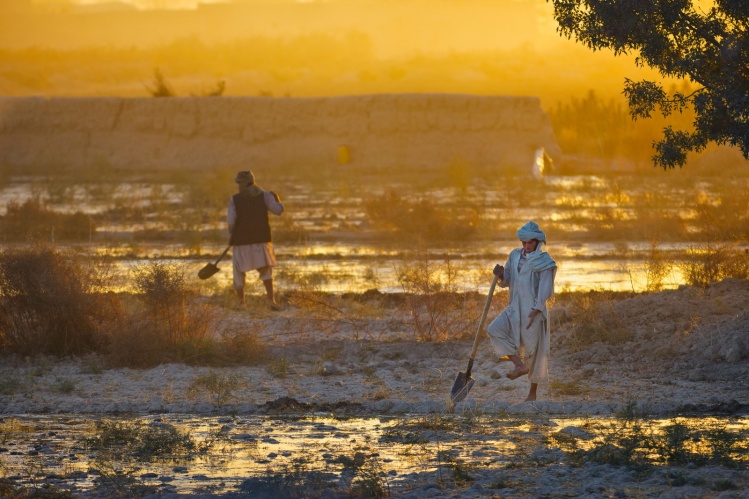 “It is going to be hell on earth.” That’s how David Beasley, the director of the World Food Program, describes the catastrophe facing Afghanistan this winter. Twenty-three million people are at risk of starvation and the percentage of the population in poverty is expected to leap from just over half to 97 percent. Acute malnutrition will be widespread; 1 million children are expected to perish.

The proximate cause of the crisis is a drought that has ruined Afghanistan’s wheat crop and driven up the price of food across the board. This would be manageable, however, under different political conditions. In August, when U.S. forces withdrew from Afghanistan and the Taliban took control of the country, Washington declined to recognize the new government in Kabul. Instead, it froze Afghanistan’s assets, most of which are held in the United States. Because the Taliban has been designated a terrorist organization, the U.S. government placed sanctions on the new Afghan government as soon as it took power, making it nearly impossible for other countries or aid agencies to work with Taliban officials. Since then, international aid has come to an abrupt halt. This is devastating in a country where such aid constituted 75 percent of the economy. By threatening to withhold assistance from a fragile country, the United States hopes it can force the Taliban government to cooperate with U.S. counterterrorism efforts and improve its treatment of women and minorities.

In its effort to pressure the Taliban, the United States is immiserating Afghanistan—again.
sharetweet

As the Afghan economy has slowly collapsed under the weight of these restrictions, prices have risen, jobs have disappeared, workers haven’t been paid, and more and more people are going hungry. Indeed, many of the children hospitalized with malnutrition are the sons and daughters of day laborers who can no longer find work. Families have gone so far as to sell their daughters, fearing that the alternative to such a grim choice is the entire family’s death. “We’ve not seen this level of near universal poverty in any country in recent history,” Kanni Wignaraja, a senior leader in the United Nations Development Program, told the BBC.

It is within the power of the United States to alleviate the worst of Afghanistan’s suffering. Certainly, the Afghan economy was already in very poor shape before the withdrawal in August—or, for that matter, before the invasion in 2001. But the severity of Afghanistan’s hunger crisis is the result of policy choices made by the U.S. government and was predicted months ago. In its effort to pressure the Taliban into being amenable to U.S. interests in the region, the United States is immiserating Afghanistan—again.

As some observers have pointed out, providing aid to the Afghan people does not necessarily equate to a formal recognition of the Taliban government. One option available to the U.S. government is to release Afghanistan’s assets conditionally. The Center for Global Development recommends the “limited, monitored release” of funds to pay for essential items like food, which could “help meet the needs of ordinary Afghans facing food insecurity without giving the Taliban discretionary control.” But so far, U.S. officials have shown no sign that they will make the funds available in any form.

Three months ago, Afghanistan dominated the headlines, and both critics and proponents of the war claimed to know what was best for the Afghan people. Now, as those people suffer in one of the worst catastrophes the modern world has known, Americans seem to have moved on. The harm we’ve done, and continue to do, to vulnerable people in faraway places is much more durable than our attention span.