Is equality compatible with hierarchy?
By Paul Baumann
Women in the Church 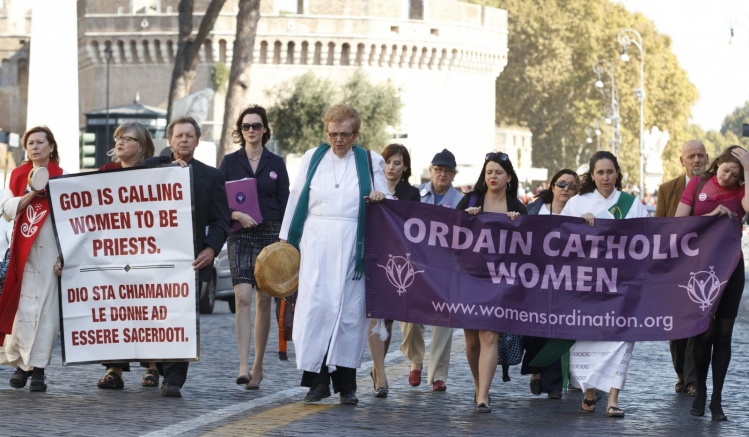 A demonstration in Rome in support of ordaining women as priests, October 17, 2011 (CNS photo/Paul Haring)

“Women on the Verge” is the title of Margaret Talbot’s long article in the June 28 print edition of the New Yorker on the plight of Catholic women who feel called to the priesthood. Talbot is a scrupulous and fair-minded journalist, and the article makes clear that women who hope to be ordained in the Catholic Church are not on the verge of a hospitable reception by the Vatican. Far from it. Instead, the most fervent of these women have found a home in ad-hoc denominations after being excommunicated because of their illicit ordinations.

Talbot does a decent job of explaining the Church’s teaching that for historical, symbolic, and theological reasons women cannot be ordained. One reason, that Jesus chose only men as Apostles, doesn’t convince many people. After all, Jesus also chose only Jews as his Apostles, but that hardly prevented the ordination of Gentiles. Another reason put forth by the Vatican is that when the priest consecrates the bread and wine, he is acting in persona Christi, and therefore the celebrant must be a man. On a literal level, this makes sense, but it also suggests a somewhat crude understanding of how symbols work, one that threatens to turn ritual actions into a kind of pantomime or playacting if not understood in the broader context of the Church’s thoroughly gendered language and symbols. Finally, there is the “nuptial mystery,” an extension of the Hebrew Scriptures’ understanding of Israel as God’s beloved spouse. In a similar fashion, Catholic teaching has long understood the Church to be feminine, the Bride of Christ. Consequently, the priest, who acts in the person of Christ, must be male. In her reporting, Talbot turns up only one lay Catholic who defends the prohibition against ordaining women, and she is a writer for the conservative Catholic magazine Crisis. Suffice it to say, her views fit every stereotype concerning the subservient relationship of women to men, and especially to priests.

The sincerity of the women Talbot talks to is humbling, but there is nevertheless something jarring about their conviction that the Church exists to “meet [their] needs” and will “fall into irrelevance” if it does not. There seems to be little appreciation for how the Church exists to shape our needs, and even to challenge them, in light of Christ’s teachings and presence. Among the women profiled in the article there is a lot of talk about community, but the underlying logic of the case they put forward for ordination is egalitarian and individualistic. One advocate dismisses recent Church reforms expanding the role of women as “crumbs from the patriarchal system that will not satisfy the hunger, the God-given hunger, for equality and dignity.” Yet the Church’s structure and ethos is communal and hierarchical, not just patriarchal. When it comes to equality and dignity, the Catholic emphasis is on where the individual stands within a hierarchically organized society that operates with varied levels of authority, responsibility, and subordination. Individual well-being and dignity are not found in self-determination but rooted in membership within the community, found together with others, not alone.

Individual well-being and dignity are not found in self-determination but rooted in membership within the community.
sharetweet

In Talbot’s essay there is a predictable opposition between what is “progressive”—and therefore obviously to be embraced—and what is “traditional.” It is taken for granted that inherited practices and values usually stand in the way of equality and fairness. She notes that other, more liberal Christian churches began ordaining women and adopting modern attitudes toward sexual morality decades ago. She does not mention the dramatic decline of mainline Protestantism over these same decades. The Catholic Church, needless to say, is not a modern institution. It does not justify its own teachings and actions by contemporary liberal Western criteria. Like most traditional cultures, its theology, sacred texts, anthropology, liturgy, and organization are suffused with metaphors drawn from human sexuality and gender. Of course, the Church can change—and has changed—but when it does so it must build on its own foundations, not repudiate them.

The women Talbot interviews repeatedly declare a love and attachment to Catholicism’s “rituals, its liturgy, and its tradition of service to the poor.” The assumption seems to be that you can dispense with the Catholic practices and social arrangements that offend modern sensibilities and still retain what is of ultimate importance, which appears to be a quest for self-expression married to “social justice.” Does the Church patriarchy need reform? Yes, it does. Does the Church need to give women decision-making authority? Yes, it does. Is ordination the only way to achieve that end? Perhaps not.

Writing about women’s ordination in Commonweal (“A Modest Proposal: A place for women in the hierarchy,” June 14, 1996), the anthropologist Mary Douglas made the matter-of-fact observation that “you can tell a hierarchical institution to become egalitarian till you are blue in the face, and nothing will happen. No one would know where to start. But tell it to reform the hierarchy and something might actually be done.”

Douglas agreed that if women are truly as valued as the Church claims, “they should not be left out of the Church’s official structure.” But she did not think ordination was the answer. The demand for ordination, she wrote, was not just about patriarchal control. “When the church’s use of the gender model is being criticized it is the form of society that is on trial, not a form of words.” She was skeptical of Church reform based on “vaunted” egalitarian claims. “Does Christianity really imply egalitarianism?” she wrote. “Or might the protections and sense of community afforded by hierarchy also reflect a genuine Christian vision?”

In egalitarian systems, Douglas insisted, the rules are easily manipulated or ignored: “The loudest voice has the main say, and woe to the weakest.” Hierarchy, in her experience, does not need to be repressive; it can make room for counterbalancing obligations between the strong and the weak. Gender and sexuality, she noted, are metaphors almost universally used in traditional cultures to justify such mutuality and counterbalancing arrangements. The metaphors denote partnership, not just dominance or competition. She urged Catholic reformers to “work with the hierarchical principle,” not seek to “abolish” it. It should be “invoked to justify an equal share of authority for women.”

Ideally, Douglas proposed, there should be a Women’s Commission on Doctrine, one that would be responsible for certain areas of Church teaching and practice, with veto power over the actions of the traditional male hierarchy. She argued it might be appropriate for the commission to have special authority over questions such as contraception, abortion, and bioethics. It would be made up of both women religious and lay women from all walks of life. Such a commission would give flesh and blood to the Church’s claim about the equality of men and women, while remaining tied to the sources of traditional Catholic identity, culture, and dynamism.

“If we respect a religious institution, we cannot dismiss out of hand its claim to honor its continuity with its own past,” Douglas wrote. “Telling its members to forget their common past and make new myths of present reality is the same as telling them to get lost, die off, and disappear.” Sadly, that is what some of the women in Talbot’s article actually say. For decades, this sort of a standoff has gotten Catholic women and the Church nowhere. At this point, as Talbot’s article inadvertently shows, both sides of the dispute are blue in the face.

Tags
Women in the Church