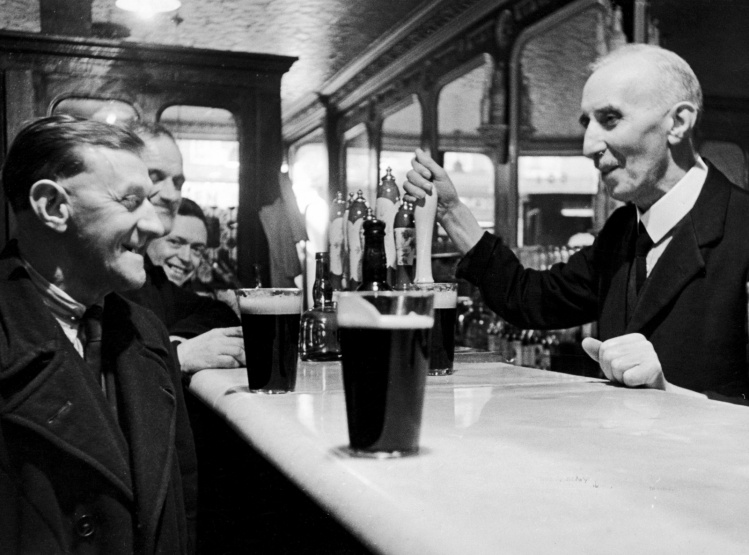 Throughout my boyhood a half-century ago, St. Patrick’s Day was eagerly anticipated by the adult men in my family. You might imagine this had to do with their wanting to honor Ireland’s patron saint, who had driven away the snakes and turned the shamrock into a symbol of trinitarian theology. I would have thought so myself if my dear mother hadn’t started to complain about this celebration weeks before the day. Nor was she alone. As a boy of just six or seven, I quickly discovered that almost all the adult women in County Donegal shared her anxiety about that day. The reason has to do with when St. Patrick’s Day occurs: right in the middle of Lent.

Why should that matter? Because at that time most adult Irish men liked to indulge in the bottle yet had given alcohol up for Lent. Then as now, everyone was expected to give something up. Children often gave up candy or other treats. Wives were expected to give up “nagging” (yes, it was a different time). Of course, all this was on top of the official Lenten observances, such as abstaining from meat on certain days. There was, however, one day of “dispensation”: on St. Patrick's Day you were allowed to enjoy whatever you had given up for Lent. For the adult men in my family, and for most of their friends and neighbors, this was a grand excuse to go on a complete bender. It seemed completely justified to them; after all, they had been on the wagon for a few weeks, and they still might have several weeks to go before Easter Sunday. Yet thanks to good St. Patrick, a little bit of Easter Sunday, or perhaps Mardi Gras, was allowed on March 17.

The entire situation was further complicated by the fact that, at least in my family, all the women and nearly all the men until their late teens or early twenties took and kept “the Pledge.” The Pledge was an oath that one would never take a drink; those who swore it, usually as children, became members of a Catholic organization called “the Pioneers.” Obviously, a child who makes such a pledge at the age of seven or eight has no idea that there might ever come a time when he or she is actually tempted to break it. And, indeed, by the time the boys were just a few years older, it was clear to most of them that this pledge was unlikely to last. By the time they were men—long after the pledge had been broken—some of them still grumbled about “how lucky the Orangemen are,” with no pledge, no nagging about having broken it, and no Lenten sacrifices. Perhaps they had worn their Pioneer pins with pride at school, but in later years keeping the pledge was regarded as a bit, well, unmanly (except for priests). And yet it was also looked upon with wonderment when a man did keep it, as one of my uncles did throughout his entire life. It should be noted here that keeping the pledge was a routine exercise for the women, to the wonderment of no one. My mother and every one of her sisters kept the pledge their entire lives. This tradition had largely died out by the time of my own generation, the children of the 1960s. Today it is, at most, a vague memory.

But let me return to Uncle Pat, who was viewed by all my relatives as a saintly soul, a true Knight of Columbus, and on this particular day as a kind of special delegate. He was treated like a clan representative standing at the gates of St Peter—one whose heroic virtue piled up a sufficient store of graces to allow others to stray on St. Patrick’s Day, as if he somehow redeemed their weakness by his seemingly supernatural power of renunciation. By his virtuous imitation of his namesake, our “saintly” Pat served as an “intercessor,” who made it possible for the other men in the extended family to drink until they fell off the pub stool.

But there was more than a bit of faith, or at least hope, invested in these elaborate rationalizations
sharetweet

All this was “good craic”—good fun. But there was more than a bit of faith, or at least hope, invested in these elaborate rationalizations. After many drinks on St. Patrick’s Day, someone would say, “Here’s to Pat. How does yer man do it?” A little while later, someone else would say, “With the next drink let’s toast Pat.” And for those intrepid souls who had given up both smoking and drinking for Lent—knowing that the one either led to the other or was no pleasure without it—St. Patrick’s Day was really special, and the toasts were often accompanied by the call to “light up for Pat” as if it were a kind of benedictory rite.

People who did not grow up in rural Ireland will dispute much of what I am recording here. When I checked my memory with an uncle who’s in his mid-eighties, he laughed and said, “you could always tell a Protestant farm” on St. Patrick’s Day because they were seen plowing the fields “as if it was any other day.”

Know-it-all scholars may object that pubs were not officially permitted to open on St. Patrick’s Day until the late 1950s. Yet such edicts from Dublin bureaucrats meant nothing to farmers in County Donegal and elsewhere, who worked how and when they decided. (Americans should also be reminded that there were no St. Patrick’s Day parades in rural Ireland—parades in the middle of Lent?—though on Easter Sunday a local band did march through the Letterkenny area. Even in Dublin, there was no parade—let alone green beer—when my parents were children. Except for a fancy ball in Dublin Castle attended exclusively by the well-to-do, this was a holy day, much like a Sunday. You rose early and attended Mass. The only difference was that afterwards you headed for the pub. I still vividly recall carrying my father’s oldest brother home after he closed the pub with some friends on a St. Patrick’s Day in the early 1980s. Like most Irishmen who exercised their “dispensation rights,” he would be sure to be at work punctually on the very next day: that was part of the deal.

This tradition had already begun to disappear by the time my own generation, the children of the 1970s, came of age. To my nieces and nephews in Ireland, these stories are the stuff of legend. Nobody drinks like they used to, and everyone is far more health-conscious. In most Irish homes today, you won’t find anyone who lights up a cigarette, let alone rolls his own tobacco or puffs on a pipe. If they take a couple of drinks, it is likely to be as a social gesture. St. Patrick’s Day, at least for the older generation who are still churchgoers, now possesses a religious meaning without any of the extra-spiritual “benefits” of yore. Some people still do speak fondly of St. Patrick’s Day as a moment when a child might be allowed to have a piece of candy or a man might be permitted a shot of his favorite whiskey. But the men no longer look forward so eagerly (or secretly) to this holy day, and the women no longer feel any anxieties about its approach. I suppose this is a good development. And yet…even a few of my elderly aunts, now in their late eighties and nineties, express a touch of wistfulness that “the drink has finally disappeared with the snakes.”

John Rodden, a longtime contributor to Commonweal, is the author of four books on modern Germany, including The Walls That Remain: Eastern and Western Germans Since Reunification (Paradigm Publishers, 2007).