A winter ascent of Mt. Marcy
By Griffin Oleynick
Spirituality
The Last Word 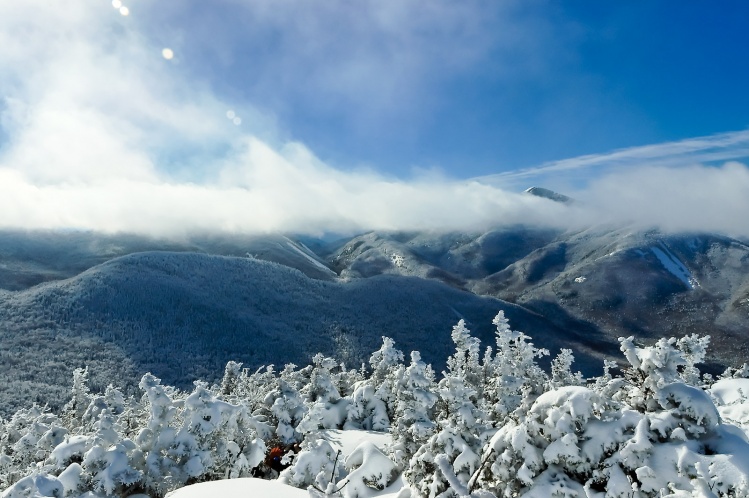 At 5,344 feet, Mt. Marcy in New York’s Adirondacks is no Everest or Denali. It’s not even a Mt. Mitchell (North Carolina)—the highest mountain east of the Mississippi, at 6,684 feet—or a Mt. Washington (New Hampshire), which at 6,289 feet is the tallest peak in the northeast. But it easily tops anything that Vermont’s Green Mountains have to offer, and it even bests Maine’s remote Mt. Katahdin, which famously thwarted Henry David Thoreau’s attempted ascent in 1846. (“It was vast, Titanic, and such as man never inhabits,” he wrote afterward.)

Mt. Marcy is also the highest point in New York, and in the dead of winter a climb to its summit is far more challenging than an ordinary day hike. Getting to the top and back before sunset means setting out before dawn. The temperature is typically below zero, and winds frequently reach fifty miles an hour. The snowpack is so deep it might not melt until July. Make that journey alone, and the challenges are compounded. Who’s there to help if frostbite or hypothermia sets in? Or to keep you from wandering off the trail, a pretty common occurrence in the Adirondacks?

In short, a solo winter hike up Mt. Marcy is a risky proposition. But I was feeling pretty confident as I cruised down the bumpy access road from Lake Placid and pulled into the lot at the historic (and oddly spelled) “Adirondack Loj” early one morning in January. I’d risen at 4:30 a.m.—an “Alpine start,” as it’s called—and it was still dark and bitterly cold (negative twenty-five degrees, according to my car’s thermometer).

Prior winter hikes taught me that if I wanted to retain feeling in my fingers and toes, I needed to get moving quickly. I planned to ascend Mt. Marcy from the north via the Van Hoevenberg trail, with the goal of reaching the summit by noon. I’d then extend the trip a little by descending south, passing Lake Tear of the Clouds, the source of the Hudson River and the place where Theodore Roosevelt learned that William McKinley was close to death and that he’d soon be president. From there I’d follow the undulating course of the frozen Opalescent River before rounding the base of landslide-scarred Mt. Colden. At last I’d make my way past the wooden lean-tos near Marcy Dam, aiming to arrive back in the lot before sundown. I had just over seventeen miles and 4,000 vertical feet of hiking ahead. I strapped on my snowshoes, poles, and pack, signed in at the register, and set off.

The first few miles of the trail meandered through eastern hardwoods, mostly beeches and maples, their leaves long since gone. The pitch here was gentle, affording me a literal warm-up as I crunched briskly under the moon and stars. Only my eyes were exposed; even so, tears froze instantly along my eyelashes. I tried snapping a few pictures with my iPhone before it switched itself off, defeated by the cold.

The ascent proper begins around mile four. Unlike modern hiking trails, often made easier by switchbacks and traverses, most Adirondack pathways—originally blazed in the 1800s by loggers and surveyors—tend to shoot straight up, seeking the quickest possible route to the top. The Phelps trail, where I’d now arrived, began rising through a thick forest of conifers.

Soon enough the sun was out in full force. I’d already been at it for a few hours, but was ready to work hard, too. Up and up I climbed, breathing harder and kicking into snow and ice for traction with every step. Paradoxically, the danger lies not in falling but in overheating. If your clothes are too warm, you’ll start to sweat. Once you’re wet, it’s nearly impossible to get dry again, which increases the risk of hypothermia. This means you’re constantly monitoring your temperature, adding and shedding layers while also trying to balance your fluid and calorie intake.

Passing through the dwarf pines was like swimming in an open-air coral reef, against the backdrop of a deep blue sky.
sharetweet

All this leaves little time to stop and admire the scenery, which grew more dramatic the higher I climbed. As I emerged from sunlit corridors of pines, I saw enormous icicles clinging to gray rock like fangs (two nearby peaks are appropriately named the Wolf Jaws). Deep pillows of powder lay atop a clearing above a frozen waterfall, with Algonquin Peak, New York’s second tallest, looming in the distance. Closer to the summit, the krummholz—gnarled dwarf pines shaped by the winds—were frosted with feathery rime ice. Passing through them was like swimming in an open-air coral reef, against the backdrop of a deep blue sky.

Suddenly, there was a noise behind me: two college kids appeared out of nowhere and  nearly blew me off the trail. I was startled—I hadn’t expected to see anyone else up here—but I calmed down when I finally stepped out onto the final pitch, a bald, rocky dome of ice and snow. The college kids, following a line of cairns a few hundred feet above me, now looked like tiny astronauts walking across a silent lunar landscape, their black silhouettes throwing the massive sweep of the Adirondacks into relief. Newly goggled, mittened, and gripping my orange ice ax, I began making my way slowly and carefully to the top.

It didn’t take long to reach the summit. The two college kids were still there. They congratulated me with a fist-bump before heading back down, leaving me alone atop an ocean of endless peaks. By that point it was nearly noon. The temperature had climbed to five degrees above zero. I lingered for about twenty minutes, trying to identify the mountains and lakes surrounding me.

Geologically, the Adirondacks are part of the Canadian Shield, not the Appalachians. Compared to other mountains in the Northeast, they’re younger, still rising by about two millimeters each year. They’re also less weathered by erosion, which gives them a more jagged, “Alpine” silhouette than their counterparts in neighboring Vermont, whose tallest peaks, Mt. Mansfield and the Camel’s Hump, I saw rising high across Lake Champlain.

Historically, the Adirondacks are rich in anecdote and color. Roosevelt, who had a lifelong passion for the Adirondacks, hiked up Mt. Marcy seventy-four years after its first recorded ascent, which was completed by a team led by Williams College geologist Ebeneezer Emmons in 1837. (Roosevelt’s midnight journey on the eve of McKinley’s death, from the mountain to the closest train station at North Creek, is now memorialized as the Marcy-Roosevelt trail.) Down in the valley, near the town of North Elba, I could see flat farmland that once belonged to the abolitionist John Brown; he was buried there in 1859 after being executed for his ill-fated raid on the federal armory in Harpers Ferry, Virginia. (Russell Banks’s 1998 historical novel about Brown was titled Cloudsplitter, the English word for Tahawus, an Algonquin term sometimes used for Mt. Marcy.) Farther away was the village of Saranac Lake, where New York City physician Edward Livingston Trudeau developed a successful treatment for tuberculosis and opened a sanitorium in the 1880s. (The novelist Robert Louis Stevenson was one of his first patients.) Finally, off in Lake Placid, I could make out the steep double ramps of the Olympic Ski Jumping Complex, built for the 1980 Winter Games where the U.S. men’s hockey team performed their “Miracle on Ice,” beating the Soviet Union during the height of the Cold War.

But what I really wanted to see was humble Lake Tear of the Clouds, so I pressed on. An hour later I arrived at its single-acre surface, shaped like a droplet and caked in snow. It’s hard to believe that this tiny and aptly named pond (technically a glacial tarn) eventually swells into the mighty Hudson River, which 280 miles south at Haverstraw Bay in the Tappan Zee measures three miles across, its widest point. If I had placed a bottle here in the snow, after the spring thaw it might travel downriver past Saratoga and Albany, Poughkeepsie and West Point, Tarrytown and Yonkers before beaching up, in a little less than a year, near my apartment in Manhattan.

Time to get moving: it was late afternoon, and my legs and back were growing weary, my water bottles getting low, my food supplies dwindling. I was fatigued yet fueled by a desire to preserve mental images of everything I’d just seen. A final surge of energy carried me on through Marcy Dam, landing me back at my car at 4:00 p.m.—an hour to spare before sundown.

It had been a long, hard day. I unbuckled my pack, slipped out of my snowshoes, and started my car. I set the heat on full blast—the hike was over, but the cold had begun to bite again. A satellite text to friends and family let them know I’d safely completed the longest, most challenging hike I’d ever attempted. I moved over to the tailgate of my car, sat down, and pulled off my boots. No blisters, but my legs were stiff and sore, and a bottle of Gatorade I’d forgotten to insulate was frozen solid. Not a bad trade-off for an epic hike.

And then, two days later, I was back in New York City. Looking through the windows of the Commonweal office above Riverside Drive I could see the Hudson, not as wide here as at Tappan Zee, but many miles farther from its source up north. Barges, tankers, and police boats plied the nearby channels, while Marcy’s summit and that tiny tear-shaped lake were visible only in my mind. I wasn’t able to take the wilderness back home—as it should be. But maybe it was here anyway. Mixed in the churning waters of the river I could imagine some of last year’s melted snow from Mt. Marcy, having patiently journeyed like that floating bottle I’d thought of on my hike. I wasn’t able to see it, exactly. But I knew where it had come from.

Can the Word Become a Hashtag?