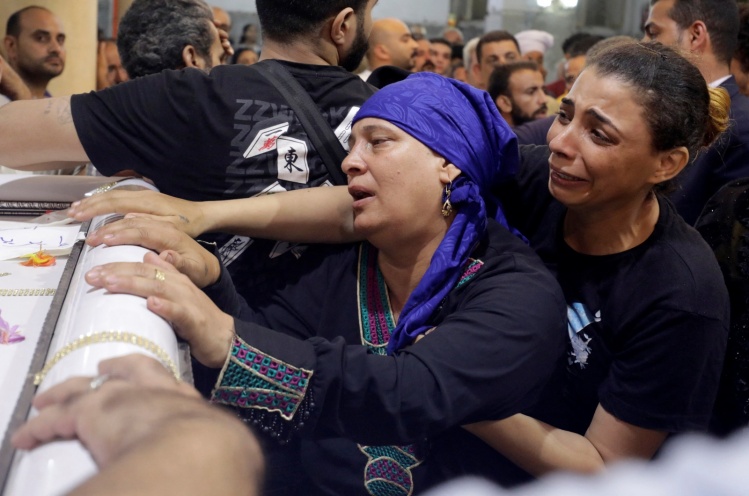 On August 14, a fire broke out during Sunday Mass at a Coptic church in a working-class neighborhood in Cairo. Forty-one people, eighteen of them children, died of smoke inhalation or in the resulting stampede. Many of the children were in the church-run daycare center on the bottom floor, where the fire is believed to have started. Witnesses described people jumping from windows at the top of the four-story building to escape the flames.

The fire at Abu Sefein Church was accidental, the result of an electrical problem that caused either a generator or an air conditioner to catch fire. Destructive and deadly fires are not rare in Cairo, where infrastructure is poorly maintained and residences or businesses are often built with little enforcement of safety standards. Egyptian President Abdel Fattah el-Sisi extended his “sincere condolences to the families of the innocent victims that have passed on to be with their Lord in one of his houses of worship.” He ordered Egypt’s armed forces to rebuild the church immediately.

For decades, Egypt’s Coptic Christians have accused the government of restricting the number and size of churches that can be built and making it difficult to renovate or restore the churches that already exist.
sharetweet

For decades, Egypt’s Coptic Christians have accused the government of restricting the number  and size of churches that can be built and making it difficult to renovate or restore the churches that already exist. As a result, Copts have been forced to set up worship spaces in unsuitable or overcrowded buildings. This is true in the case of Abu Sefein Church, which had been an apartment building. After the fire, Tawadros II, the Coptic pope, said that the church had been too small to hold the number of members it served, and he called on the government to allow more churches to be built. Anba Angaelos, the archbishop of the Coptic Orthodox Church in London, tweeted that the fire at Abu Sefein is “a direct result of a painful time when Christian communities could not build purpose-designed churches, and would have to covertly use other buildings, not fit for the purpose and lacking the necessary health and safety features and escapes.” In 2016, el-Sisi removed some restrictions on the building and renovation of churches, but local governments still have the power to limit church construction. A U.S. State Department report on religious freedom found in 2021 that the building of churches in Egypt is “subject to greater government scrutiny than that applied to the construction of new mosques.”

Copts, who make up 10 percent of the total population of Egypt, have long endured violence and discrimination. In 2011, a crowd of Muslims burned several churches in Cairo, and Coptic churches have also been the target of terrorist attacks. Some observers accuse the government of restricting the building of churches out of fear of these Muslim extremists, who believe Christian churches undermine the country’s “Islamic character.” In this charged atmosphere, churches also serve as important community centers for Christians, offering a haven from violence or harassment.

When a church in Africa is attacked by Islamic militant groups like Boko Haram, it often makes international news. But there are other ways to make a religious minority feel unwelcome. “Copts are forced to live in the shadows and worship in silence,” one Copt told Middle East Eye. In the days following the tragedy at Abu Sefein, two more accidental fires broke out at two other Coptic churches. No deaths were reported, but the danger remains. As one woman who lost two relatives in the Abu Sefein fire lamented, “No one can believe that children went to pray and never came back.”