The Sorry State of U.S. Infrastructure
By The Editors
Domestic Affairs
Economy
Editorial 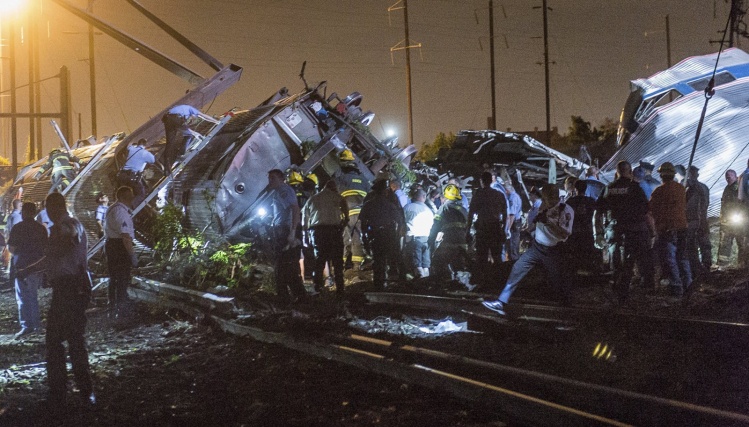 On May 13, one day after the train derailment in Philadelphia that killed eight people and injured more than two hundred, the House Appropriations Committee voted to cut $251 million from next year’s Amtrak budget. The following day a reporter made the mistake of asking House Speaker John Boehner whether insufficient funding for Amtrak might be partly to blame for the accident. “Are you really going to ask such a stupid question?” Boehner replied. “Obviously, it’s not about funding. The train was going twice the speed limit.”

Boehner was only half right. Investigators did determine that the train, en route from Washington, D.C., to New York, was traveling at 106 miles per hour as it neared a curve where the speed limit is only fifty. This was likely the result of human error. But “positive train control”—an automatic breaking system that could have slowed the speeding train—was not yet operational on the section of track where the crash took place. With proper funding, it might have been. The Rail Safety Improvement Act of 2008 requires all railroads to install this technology before the end of this year, but, largely because of inadequate funding, most are likely to miss this deadline. The National Transportation Safety Board recently concluded that, in the past decade alone, twenty-five fatal rail accidents could have been avoided if positive train control had been in place.

The United States lags far behind the rest of the developed world—and much of the developing world—in the quantity, quality, and safety of its passenger trains. Our only high-speed train, the Acela Express, travels between Washington and Boston at an average speed of about sixty-eight miles per hour. Some high-speed trains in Europe, Japan, and China average just under two hundred mph. And yet, despite the fact that our trains are slower and our rail network far less extensive, our rail fatality rates are twice as high as Europe’s.

The reason is obvious: Other countries are willing to invest in rail infrastructure—and especially in new technologies that improve safety. In 2011, the United States spent about $35 per person on our rail system, while Japan and Europe spent about $100 per person. China, which has built ten thousand miles of high-speed track since 2008 and plans to build ten thousand more by 2020, will spend $128 billion on its rail system this year. If the House Republicans have their way, the U.S. government will spend just $1.1 billion on Amtrak in 2016. Some in Congress would like to stop funding Amtrak altogether. They say it should be able to make a profit or at least break even. But no modern transportation system pays for itself. As Andy Kunz, president of the U.S. High Speed Rail Association, told the National Journal, “Our highways don’t make a profit. Our airports don’t make a profit. It’s all paid for by the government.”

Not that our highways and airports are in much better shape than our railroads. The nation’s entire infrastructure is suffering from neglect. The American Society of Civil Engineers gave it a grade of D+ back in 2013 and estimated that the country needed $3.6 trillion of public investment by 2020. The ASCE noted that the average age of the country’s 84,000 dams is fifty-two, and that one in nine of its bridges is considered structurally deficient. Every few years one of these bridges collapses, occasioning a brief outburst of bipartisan concern on Capitol Hill. Then nothing changes. Federal spending on infrastructure rose a bit when President Barack Obama’s stimulus package took effect, before dropping again to historic lows. The United States now spends less than 2 percent of its GDP on infrastructure, less than half of what Europe spends—and less than half of what we were spending in the 1960s.

There has never been a better time for us to repair and rebuild, and not only because the need is so great. Big infrastructure projects would create good jobs and thereby boost an economy whose annual growth rate recently fell below 1 percent. And with interest rates so low, it has rarely been easier for the government to finance these projects. The longer Washington waits to make the nation’s infrastructure safe, reliable, and efficient, the more expensive it will be. The sooner it does so, the sooner our whole economy will benefit from the upgrade.

So what’s keeping us? The government’s failure to invest in infrastructure demonstrates not only a lack of leadership on the part of the Republican House and Senate majorities, but also a lack of basic political competence. Our elected representatives are responsible for maintaining the public services that we all rely on, directly or indirectly. If their ideological hostility to public spending has blinded them to this duty, they may be in the wrong line of work.