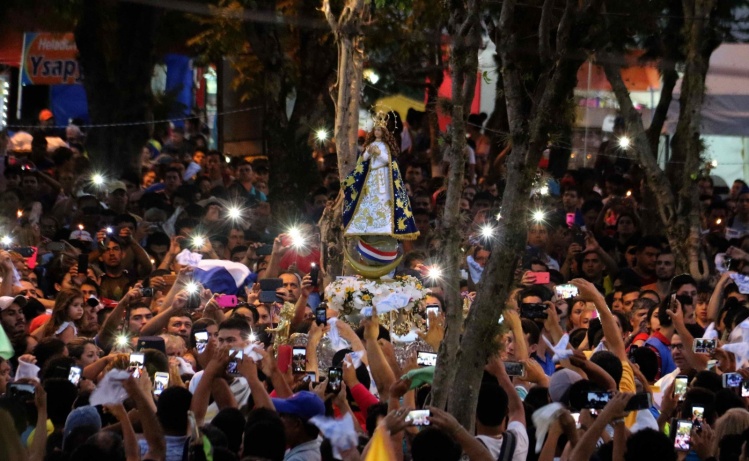 There is a scene in Michel Houellebecq’s controversial novel Submission that should be read by anyone who wishes to make the restoration of religious tradition part of a political project. Submission was much discussed when it appeared three years ago because of its provocative political speculation: the story takes place in a fictional near future when the candidate of an Islamic party wins the French presidential election after forming a coalition with the socialists against the right-wing National Front. At its heart, though, the novel is a satire aimed at the spiritual emptiness of the French cultural elite, represented by the novel’s protagonist, a literature professor named François.

In the first half of the novel, François visits the medieval shrine of the Black Virgin of Rocamadour in south-central France as part of his half-hearted quest to find meaning in his life. The village of Rocamadour is a soulless tourist trap, centered on gastronomical activities. But there is still some life around the Catholic shrine. François attempts to venerate the Virgin: “Every day I went and sat for a few minutes before the Black Virgin—the same one who for a thousand years inspired so many pilgrimages, before whom so many saints and kings had knelt.” But he doesn’t have the same experience as those pilgrims. The statue “[bears] witness to a vanished universe” that he longs for but cannot enter. When, for purely pragmatic reasons, François finally converts to Islam, he converts to a religion no more alien to him than Christianity—despite the fact that all his ancestors were Christian.

This passage comes to mind every time I read about a politician from Europe or America trying to make use of the vestigial Christian culture of his or her country. There have been many such politicians lately. In June, Viktor Orbán of Hungary spoke of turning his country into an “illiberal democracy” with a formally Christian identity: “Unlike liberal politics, Christian politics is able to protect people, our nations, families, our culture rooted in Christianity, and equality between men and women: in other words, our European way of life.” In Poland, the ruling party has affirmed the Catholic dimension of Polish identity through official ceremonies which blend church and state. In Italy, Deputy Prime Minister Matteo Salvini of the Northern League (formerly a northern separatist party, now populist and nationalist), brandished a rosary and a Bible and spoke about his Catholic roots on the campaign trail during the recent elections. In the United States, politicians toggle between affirming one nation under God, and proclaiming an outright Christian nation—two different things. And of course, there are the never-ending complaints about a “War on Christmas”: last December, Donald Trump announced, “We can say ‘Merry Christmas’ again.”

The path to spiritual renewal cannot be made shorter or easier by mass politics.
sharetweet

Some politicians have taken the further step of using the Cross as a political tool. Laymen in Bavaria (Markus Söder of the Christian Union Party) and Italy (Salvini again) have called for crosses to be placed in courthouses, police stations, and other public buildings. Salvini emphasized the desire to place crosses in Italy’s ports of entry—“in an elevated and highly visible place” —presumably so that refugees and immigrants of other faiths might learn the religious identity of the country they’re entering. Yet Salvini’s party traffics in a brand of nationalism that treats Christianity not as a unifying faith but as a cultural artifact, on the same level as the pre-Christian pagan gods of northern Italy. For most Christians, the Cross is a symbol that a suffering refugee might find solace in, but for Salvini it is a symbol of a national identity that needs to be protected from foreigners.

Perhaps the most interesting developments are taking place in France, where only the Left appears to be keeping a secular tone that was, until recently, the norm for all politicians. On Pentecost, Marion Maréchal Le Pen of the National Rally (the National Front’s new name) joined a pilgrimage to Chartres, led by Cardinal Robert Sarah, Chief of the Congregation of Divine Worship at the Vatican. Last year, François Fillon, presidential candidate for the center-right Republican party, spoke eloquently about the Catholic roots of France, arguing that they are just as significant to the country’s identity as its Revolution in 1789: “You just heard the bells ringing.… A thousand years of history! How can you not feel the force, the power, the depth of this past that forged us, that gives us the keys to our future?” Even the centrist Emmanuel Macron, paragon of the European liberal establishment, told France’s Catholic bishops in April that “we share in a confused way that relations between the church and state have been damaged and it is up to you, as much as us, to repair them.” In theory at least, laïcité remains a bedrock principle of the Fifth Republic. Yet these French politicians all want to tap into the Catholic roots of French identity.

Christians who would like to see more room for religion in public life might be inclined to welcome this trend. They might see it as aligning with the message of Pope Francis, who argues in Laudato si’ that our political problems have spiritual dimensions. Or they might see it is the beginning of a new “post-liberal” order grounded in transcendent faith. But these political-religious gestures usually have more to do with rallying the base for a particular party than with renewing faith in the West. Religious symbols are being mixed with secular power for the benefit of the latter. Politicians wring the last bits of memory and meaning from religious traditions in order to secure votes. Those who applaud the religious gestures of populist politicians might find themselves in a position like that of François at Rocamadour: thirsting for the sacred, but feeling more nostalgia than faith. The path to spiritual renewal cannot be made shorter or easier by mass politics. To understand the shrine at Rocamadour as something more than mere patrimony requires discernment and personal illumination. Political rallies cannot produce or preserve this kind of piety; only prayer can.

At least, that is how I feel whenever I contemplate the Catholic country of my birth. In the early 1600s, the Virgin Mary appeared in Ca’acupe, Paraguay. She saved the life of a member of the Guaraní tribe named José, who was fleeing from dangerous rivals from the Mbayá tribe. The Virgin appeared and spoke in the Guaraní language, helping José find a place to hide. Today, a blue and white basilica that rivals St. Peter’s in size rises to the skies from the heart of the city of Ca’acupe. Thousands of pilgrims visit the site every year. Paraguayan flags adorn the altar. The President of Paraguay usually makes an appearance there on December 8, the feast of the Immaculate Conception—a sign of the influence the church still has on Paraguayan society, though that influence shrinks with every passing year.

I have visited Ca’acupe several times, both in school-sponsored trips and by myself as an adult. I have entered the shrine with different feelings: patriotism, sure, but also sadness, awe, curiosity, unsettled questioning. I can’t recall too many moments when the patriotic element of the shrine felt essential to true devotion. I learned to venerate the shrine through a personal path that was not supported by any political regime I have lived in. Our Lady is a symbol, in the proper metaphysical sense of the word, of the presence of God and of our response to that presence. How to ponder such a notion? How to judge its veracity? Sure, it helps that there’s a popular religious culture and community that sustains the shrine. A religious symbol can only be understood with the help of such a community, which interprets it. But that community isn’t a nation-state; it’s a communion of believers. Moreover, the act of faith in the symbol, the appropriation of the symbol’s meaning for one’s own life, is ultimately a personal act. What does it matter to me that the president of Paraguay makes an appearance at the shrine? Citizens of Poland, Hungary, France, and the United States should ask themselves the same question about their presidents and their shrines.

Before he leaves Rocamadour, François comes to a deeper understanding of its shrine. Despite being under the influence of the patriotic verse of Charles Péguy during his trip, François is able to disentangle the nationalist side of popular piety from the transcendence that the Black Virgin represents: “What this severe statue expressed was not attachment to a homeland, to a country…. It was something mysterious, priestly, and royal…” The failure to distinguish between the local and the sacred leads to either disappointment or idolatry.