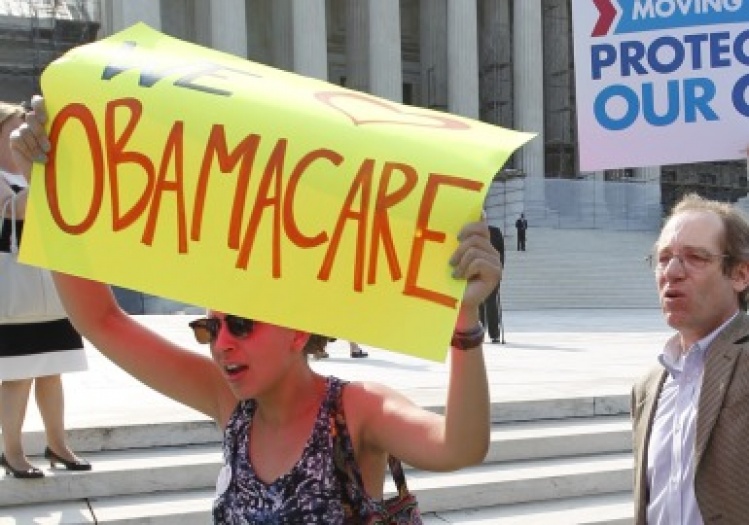 The Affordable Care Act is more popular among Republicans than Obamacare, by a 22% to 14% margin, and among the general population, 39% to 34%, according to a Fox News poll.

According to Pew, of the 53% of Americans surveyed who disapprove of the ACA, 27% want Congress to make it work as well as possible, while 23% want Congress to “do what they can to make it fail.” Among the Tea Party, 64% want their representatives to work actively at making it fail. “The Tea Party wing of the GOP is dead set on sabotaging Obamacare above all else,” writes Kevin Drum at Mother Jones.

Jonathan Chait looks at that effort, and gives details on the status of reforms:

Health-care inflation since 2011 has fallen to its lowest level in half a century. The Congressional Budget Office estimates of Obamacare’s costs, widely derided at the time of its passage as too optimistic, have thus far proven too pessimistic. The agency has already cut $600 billion off the expected ten-year spending total for Medicare and Medicaid. If the reforms continue to bear fruit, costs will come in even lower.

And health experts increasingly expect the reforms will bear fruit. “The ongoing slowdown in the health-care growth rate defies historical post-recession patterns and is likely to be sustained,” concluded Price­Waterhouse-Coopers in June. “It appears that the reforms will stick and health-care exchanges and other policies will bring competitive pressure to markets,” says Randall Ellis, a professor of health-care economics. “Although the proof for this point of view is not yet definitive,” reports the Health Affairs blog, “the depth and breadth of change suggest that significant transformation in the nation’s delivery system is under way.” Among health-care wonks, this is no longer a controversial assertion: The evidence thus far suggests Obamacare’s cost reforms are a staggering success.

The Wall St. Journal says the defunding drive is a political loser:

Mr. Obama is never, ever going to unwind his signature legacy project of national health care. Ideology aside, it would end his Presidency politically. And if Republicans insist that any spending bill must defund ObamaCare, then a showdown is inevitable that shuts down much of the government. Republicans will claim that Democrats are the ones shutting it down to preserve ObamaCare. Voters may see it differently given the media's liberal sympathies and because the repeal-or-bust crowd provoked the confrontation. …

We've often supported backbenchers who want to push GOP leaders in a better policy direction, most recently on the farm bill. But it's something else entirely to sabotage any plan with a chance of succeeding and pretend to have "leverage" that exists only in the world of townhall applause lines and fundraising letters.

The Congressional Budget Office warns of unsustainable debt levels by 2023, due mainly to the rising costs of Medicaid, Medicare, and Social Security. In response to the report, Paul Ryan, leader of the House Budget Committee, suggests eliminating Obamacare.