‘The Face of Water’ by Sarah Ruden
By Jack Miles
Books 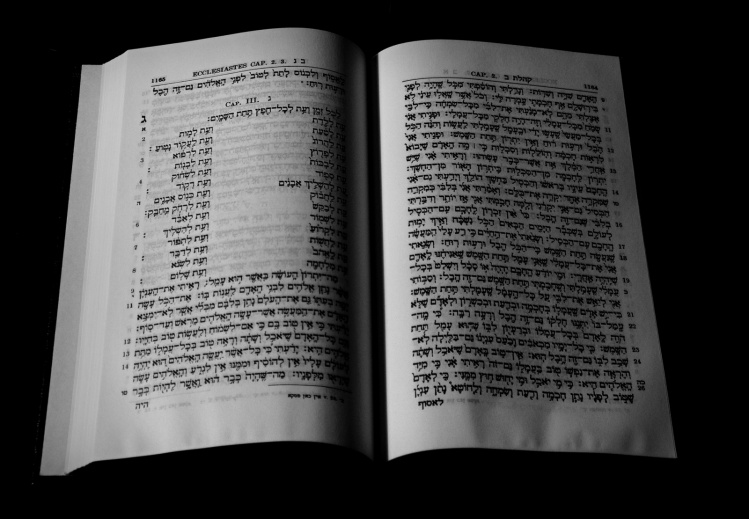 Ecclesiastes 3 in the Original Hebrew, Jaroslav A. Polák

Somewhere in The Autobiography of Alice B. Toklas, Gertrude Stein has Alice opine that no one can appreciate a sculpture who has not dusted it for a year. Translating any passage in the Bible imparts to the translator an appreciation that is similarly intimate and humble, yet at the same time dynamic and intrusive, for the translator must begin with what the Hebrew, Aramaic, or Greek permits, allows, or requires, and then must proceed with inescapable rudeness to a “version” of it, using only what her native language permits, allows, or requires. A translator knows the target text “in the biblical sense.” She has the kind of access to it that your proctologist has to your body.

Such is the intimate, humble, dynamic, intrusive, and inescapably rude appreciation of seven Old Testament and seven related New Testament passages that Sarah Ruden aims to convey in The Face of Water. Ruden links each of these pairs to a different aspect of the Bible translator’s challenge: grammar, vocabulary, style, prosody, voice, meaning, and comedy or wit. The seven pairs recur in the three parts of the book: “Impossibilities Illustrated: The Character of the Languages and Tests”; “Possibilities Put Forward: Mainly, the Passages Retranslated”; and “An Account of the Fuller Facts,” which exhibits some of the tools or resources that translators employ.

The epigraph to Ruden’s book, a poem of her own composition, includes the following quatrain:

I passed exams, unpacked and packed,
Ordered and cancelled. Time went by
Like a foreign-language broadcast. Then
I saw a river in the sky.

Ruden—with a Harvard doctorate in classical philology but without a conventional academic appointment—seems in the late 1990s to have embraced translation as her calling in life, the river in her sky, and this with most impressive results. At the rate of one major classic every three or four years, all published to favorable reviews, she has translated the Satyricon (2000), the Lysistrata (2003), Homeric Hymns (2005), the Aeneid (2008), The Golden Ass (2012), and the Oresteia (2015). Her translation of Augustine’s Confessions was published in June, and she is under contract for a translation of the gospels.

Ruden is also an energetically, even combatively engaged Quaker Christian. Paul Among the People (2010) combined professional and personal commitments in a tart and somewhat contrarian appropriation. Her forthcoming gospels and Confessions suggest a further turn from the pagan to the Christian cassics as does the fact—much in evidence in The Face of Water—that Ruden has immersed herself in the study of Hebrew. A priori, then, there is good reason for a Bible reader who does not know Hebrew or Greek to expect here both a deeply informed and an essentially sympathetic introduction to how, linguistically, the biblical texts actually work.

But there is a problem with this book, which I will illustrate with a brief digression on bicycling as distinct from walking. In walking, the weight is born on the feet, and locomotion is achieved as the walker pushes downward on the toe of one foot, while lifting its heel, and, leaning forward slightly, simultaneously raises the other foot from the ground and moves it forward, shifting the weight to that foot as it meets the ground again. In this way, by successively falling forward, the walker harnesses the force of gravity and achieves forward locomotion accompanied by an ongoing left-right rhythm.

Bicycling is different. In bicycling, the weight is born on the buttocks, and locomotion is achieved as one foot pushes down on a pedal, and this force is transferred by a chain to one of two linked wheels, propelling the pair and the seat between them forward, while the same rotation brings the second foot into pressure position on a second pedal placed on a common sprocket at a 180-degree angle from the first. The alternating, left-right, lateral equilibrium of walking is thus replaced in bicycling by a uniform lateral equilibrium achieved principally by forward momentum. In walking, moreover, pedal motion mediates directional control; in bicycling, manual motion does the same through a handlebar governing a movable front wheel.

Why this digression? Because my experience—reading Sarah Ruden’s linguistic analyses of passages that I have long since read in the original Hebrew and Greek and, in one or two cases, also translated—is peculiar in the way that, I trust, my walking/bicycling comparison just now must have struck you as peculiar. I see what she is trying to do. I easily appreciate how the Hebrew and Greek do indeed produce the effects that she describes them producing. I get it, I do. Easily. But would I get it if I did not already know the languages? If you had never either walked or bicycled, would you get my paragraphs above?

In her discussion of 2 Samuel 11–12:7, Ruden focuses on a recurrent Hebrew clause that in the King James Version is commonly translated “And it came to pass”:

Technically, [this] Hebrew clause (more like a mini-clause) is a “vav consecutive” or “vav conversive” constructed out of the verb for “to be” or “to become” or “to happen” and the one-letter word for “and,” vav (which happens to be, on its own, visually, a straight vertical line). In a vav consecutive, vav is glommed right onto the front of a certain form of a verb (well, visually, onto the back, as we’re reading right to left) and changes that verb’s quasi tense or aspect (or something). Don’t close this book and turn on a PBS documentary about ferrets: what I’m about to tell you is way more interesting.

With all the good will in the world for what Ruden is attempting here, I fear that for most readers the ferret documentary is likely to win.

At a later point in her book, Ruden says that she herself would never read a book like the very book she has written on any text as inescapable as the Bible: “the only writing about writing that doesn’t send me climbing up the walls is about works I have no intention of ever sampling.” But she then goes on:

On the other hand, since as a translator I am on the toiling end of the literary enterprise most of the time—mopping that floor, stocking that salad bar—there are worse-informed people you could consult if you want to know what goes on in the kitchen.

There certainly are many worse informed people than Ruden, but most people just don’t care what goes on in the kitchen: they are diners, not cooks. Actually, Ruden is at her most accessible and enjoyable when she comes out of the kitchen and chats with the diners about what the texts mean. Then, she can both delight and instruct with her combination of deep erudition, a beautiful linguistic sensibility, and a cheerful, folksy style (she likes to pop in the occasional “for cryin’ out loud” or the like).

Translation, however, is finally the criterion by which this book must rise or fall. And as for her actual translations, well, to put it as colloquially as she might, they range from the pretty wonderful to the pretty stinky. On the wonderful side, here are the last two verses of her translation of Revelations 7:9-17:

They will never go hungry anymore; they will never be parched anymore;
The sun’s heat will not assault them, no burning heat will strike them.
Because the tiny lamb there in the middle of the throne will be their shepherd;
And he will lead them on the paths to springs flowing with water that gives them life,
And God will wipe away every tear from their eyes.

On the stinky side, here are the opening lines of her translation of Matthew 6:9–13:

…Father, our father in the heavens above,
Spoken in holiness must be your name.
Into the world must come your kingdom,
And into being whatever you have willed,
In heaven the same way as here on earth.

All I could think of, reading those lines, was Wolcott Gibbs’s famous parody of Henry Luce’s “Timestyle”: “Backward ran the sentences until reeled the mind…Where it all will end, knows God.”

It’s true (and now please step into my kitchen for a moment) that the standard sentence order in either Aramaic or Hebrew is verb + subject + object + modifiers. It’s entirely plausible as well that an Aramaic Vorlage lies beneath Matthew’s Greek, but does one replicate the effect of standard order in the source language by using the different order that is standard in the target language? Or does one retain the native syntactic order of the source language even to extraordinary and dislocating effect in the target language? Here, Ruden does; Miles wouldn’t.

Such are the questions that translators rightly worry about, but I’m afraid it does take one to know one. For the lay reader, the non-translator, much of The Face of the Water will be a tough read, and that’s for darn sure.

The Face of Water
A Translator on Beauty and Meaning in the Bible
Sarah Ruden
Pantheon, $26.95,  232 pp.