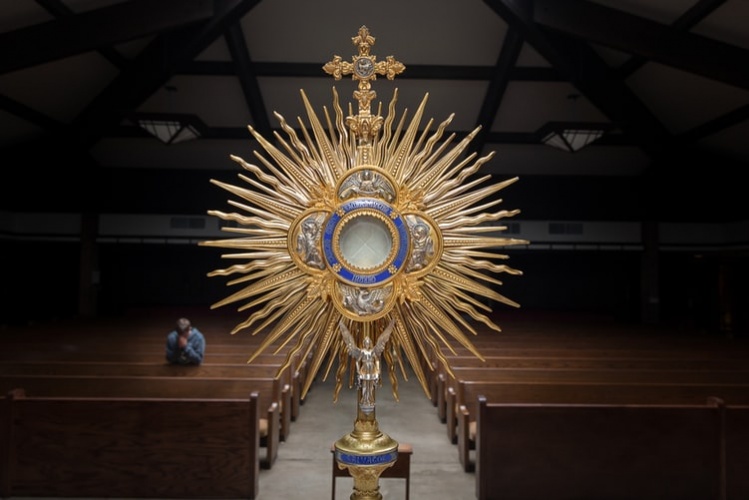 Photo by Josh Applegate on Unsplash

The article shot around Facebook, with friends of every persuasion but the traditionalist posting it. My more conservative friends were as indignant as my more liberal friends. “Slut Shaming in the Adoration Chapel” by the Patheos blogger “Misfit Catholic” describes a mother and her teenage daughter coming to adoration one night. They sit, the daughter in the first row and her mother (he calls them D and M) right behind her. The girl is wearing short shorts. A woman (called W) in her late fifties, sitting in the back row, notices. “Thirty seconds later, W walks up, a light jacket in her hand, and drapes it across the girl’s lap saying ‘Cover up—this is Jesus we’re talking about here.’ She then goes back to her seat, without saying anything to M—and resumes praying.” The girl starts sobbing, and they leave. “Catholics,” Misfit Catholic writes, “can be such terrible Christians.”

You can guess the reason so many people passed this article on. It arouses indignation against a kind of Catholic who annoys most of us. Almost everyone knows people like this, and may have been their victim. They really gret up your nose, as an English friend puts it. The smug, priggish, judgmental old Catholic is someone you can safely criticize. They’re Pharisees, and Jesus hit the Pharisees hard and in front of other people. Religion offers lots of excuses for emotional predation and someone has to call out the predators. This woman isn’t going to stop driving people away from the church unless someone confronts her. Probably not even then, but certainly not otherwise. Of course, she may herself be a victim. The desire to control masquerading as the protection of some good, like modesty, may be a defensive response to trauma. Even so, or especially so, someone needs to talk to her.

The smug, priggish, judgmental old Catholic is someone you can safely criticize. They’re Pharisees, and Jesus hit the Pharisees hard and in front of other people
sharetweet

The article is worth reading, though the story it tells will annoy you. The writer, whose real name is Larry Denniger, feels distressed and pained for the victims. But I think that he gets something wrong. Not as wrong as the “slut-shaming” woman, but wrong in the same way. He treats the way the girl is dressed as far more important than it is. He lists several reasons the girl could have come to the chapel in such shorts: “Maybe they had come directly after visiting a hospitalized family member. Or perhaps a family member had died, and they sought consolation.” Or maybe “they were on their way home from a barbecue or party, and popped in to say hi to Jesus.” He notes that the mother might have dragged the girl along, when she was already angry at the church. No one else in the chapel could possibly have known the circumstances.

But then he writes, “Let the girl pray, and when she’s done, maybe go up to her and gently explain that her style of dress could be seen as inappropriate. Or perhaps say something to M,” the mother. He thinks that’s the kind thing to do. Private, not public. Personal, not impersonal. Correction, not shaming.

But it isn’t the truly kind thing to do. Delaying the shaming and being nicer about it does not change the effect. Everything he says against doing it while the girl is praying is an argument against doing it afterwards. The girl and her mother are still going to feel they came to the chapel to pray and got criticized and shamed for the way the girl was dressed. What they’ll remember, what they’ll probably never forget, is that someone churchy thought the girl’s outfit was more important than her coming to the church to pray.

The truly kind thing to do is not to think about the girl’s dress at all. The issue is not modesty. The issue is presence. Even those of us unvexed by a girl’s short shorts may have other reasons to evaluate and exclude. For reasons no one else in that chapel could know, the mother and her daughter felt they had to be there. If someone in the church finds a teenager’s thighs distracting, she can look more intently at Jesus in the Tabernacle or meditate on the crucifix, or just close her eyes. What matters is that the girl and her mother kneel in that chapel before the Lord of the universe—the God who died for them—and talk to him.

I think I know what the writer should have done, though I wouldn’t have thought of it in time had I been there. He should have walked up to the girl, knelt in the aisle beside her, smiled, taken the jacket away, and said, pointing to the Tabernacle, “This is Jesus we’re talking about here.” And then gone back to the offended woman and given her the jacket and—smiling again, because God loves the smug and priggish as much as anyone else—pointed to the Tabernacle and said, “This is Jesus we’re talking about here.”

Tags
Women in the Church
Spirituality

A Thing That Should Not Be 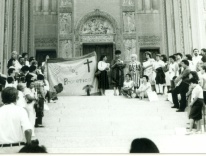