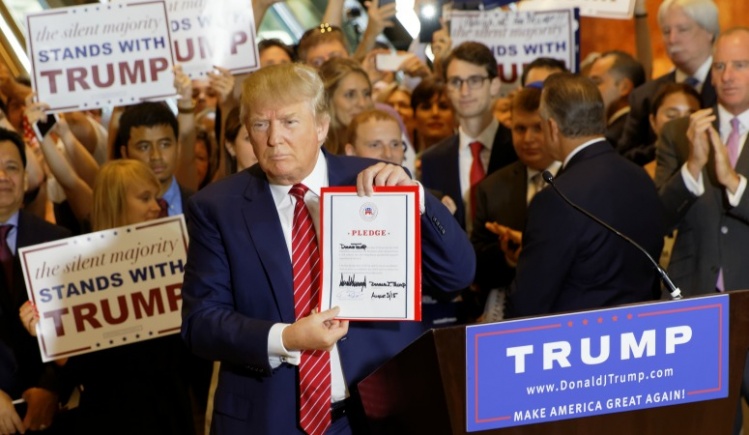 Let’s be clear: Donald Trump is not a fascist; he is a semi-fascist. I recognize the risk of using the f-word. In fact, I am positively allergic to it. This case, however, is different. The U.S. is at a moral crossroads. We need to be utterly unambiguous about why.

I emphasize the “semi” in semi-fascist. Trump has shown no interest in the stereotypically fascist exaltation of discipline, not for himself and not for any organized movement. The closest his militants get to uniforms are baseball caps. And though he may have toyed with the occasional outbreaks of violence at Trump rallies, those scuffles are absolutely nothing like the systematic thuggery of budding fascisms.

On the other hand, consider this: He has built a political movement on a populist nationalism that scapegoats enemy groups both within and without. He will expel or bar alien intruders. He plays relentlessly on a sense of national humiliation, victimization, grievance, and decline. He asserts that the nation faces an emergency that justifies torture and murdering the wives and children of our terrorist enemies, even briefly suggesting that as Commander in Chief he could order the military to violate the laws of war. Unlike full-fledged fascists, he is not explicitly anti-parliamentarian, an idea perhaps too complex for him (or perhaps too multisyllabic); instead he scorns virtually the entire political class as “stupid” or “without a clue,” i.e., unable to make a deal. He takes no note of Congressional procedures and Constitutional limits. He is indifferent to civil liberties except for gun rights, and has spoken ominously about reining in the press. When asked about compromise, he replies by vaunting his own “flexibility,” as though compromise were nothing more than a personal skill rather than an appreciation for distinctive outlooks and interests. If none of that rings an alarm bell, you haven’t read enough about Europe in the 1920s and ’30s.

Still, why not just call Trump an authoritarian or a demagogue, which would be bad enough? Why not “Caesarist” or caudillo? Liar, bully, opportunist, vulgarian, purveyor of toxic politics—won’t that language suffice? I don’t think so.

All those other terms underplay the seriousness of the moment. I deliberately choose semi-fascist for its historical resonance. It calls to mind a critical period in the last century. We continue to judge the public figures of that time by the political and moral choices they made regarding a fresh form of venomous politics.

Fascisms, often inchoate in early stages, have never come to power without the acquiescence or connivance of elites.  American voters, yes, but especially American elites, intellectual, religious, cultural, and above all economic and political, now face a moment of profound choice. We shouldn’t let them off the hook by using euphemisms.

Until now, conservative elites—the Republican “establishment” most famously—have been divided about Trump. Most have opposed him. The corporate establishment detests his unorthodox positions on trade and immigration. Some conservative political elites have welcomed his attacks on Washington and “political correctness”; his nativism; his defense of military might overseas and gun rights at home; and above all the “excitement” he generates, drawing crowds to stadiums and voters to the polls. But even more conservatives have objected to his liberal views on sexual issues, his slurs against groups the GOP needs in the future, and his potential impact on down-ballot candidacies. Foreign-policy elites of all sorts quail at what seemed like an uninformed, off-the-cuff “America first” reshuffling of longstanding alliances and engagements. In every quarter there have been questions about Trump’s personality.

Admittedly, that personality lends itself more easily to psychological than ideological labels. Clinical narcissist, say some worriers. Seriously unstable, say others. Efforts to describe him have exhausted the second letter of the alphabet: blowhard, boor, braggart, buffoon, blusterer, brash, belittling, belligerent, brutal, bombastic. His record of outrageously crude, boastful, and wildly inaccurate statements, almost gleefully volunteered, goes back many years. His stream of consciousness speeches, skipping from one non sequitur to another, are mesmerizing for their self-centeredness and his compulsive measuring of himself against others. Perhaps an “a” word rather than a “b” one would best describe this mix of egocentricity and insecurity: adolescent. That would not be fair to most teenagers.

The Trump psyche, now being politely referred to as his “temperament,” raises serious doubts in itself. What renders it more threatening is its powerful resonance with millions of angry voters. America is “losing, losing, losing”; radical Islamic terrorism is “a big, big problem”; his primary victories are “amazing”; he will replace Obamacare with “something much, much better”; America will “win, win, win” again, and be “a great, great power over everybody.” If you have doubts, well, “believe me!” The sheer vacuity and primitive articulation of his ramblings make ordinary political promise-mongering sound highly sophisticated.  They do not faze Trump’s zealous followers, however. On the contrary, the more magical Trump’s proposals, whether to wall off Mexico at Mexico’s expense or to track down, arrest, and deport 11 million U.S. residents, the more he defies all standards of consistency, civility, and fact, the more his followers see proof of his sheer power of will.

What Trump celebrated in those weird victory speeches was winning. He mocked his rivals not because of their policies but because they were not winning. Questioned about the tenor of his conduct or campaign, the presumptive nominee’s reply is simple: I’ve been winning. Winning is validation.

However did we get here? Who or what is responsible? The debate has been lively. Most of us know the answer—the other guy. Read the opinion pages of the Wall Street Journal and you’ll learn it is all Obama’s fault. Liberals blame the rigged economy, growing inequality, the Great Recession, loss of jobs to globalization, years of tutorials in rage by talk radio, and the Koch brothers. (Count me in, for the most part.) Conservatives blame liberals who deride traditional values, shrug off what their loss has meant to the economically vulnerable, and then treat the floundering reactions of the downwardly mobile as bigotry.  (Count me in here, too, at least a little bit.) Others blame larger forces from automation to social media. That is a vitally important discussion. Let it continue, perhaps with greater doses of self-scrutiny.

Right now there is a more immediate challenge. The presidential candidate of one of our two political parties is a semi-fascist with a gift for mobilizing millions and may even, against the odds, win the presidency. What is to be done?

Obviously the moral test is greatest for conservatives and loyal Republicans. Some are shamelessly failing it, enthusiastically lining up behind Trump, and shedding, when necessary, their prior commitments. Others are reluctantly getting on board, as though they had no choice. It can be expected that alarmed donors, corporate lobbyists, and other big money muscle like the U.S. Chamber of Commerce will seek quiet backroom reassurances regarding tax cuts, trade, deficits, taxing hedge funds, and foreign policy commitments. Hasn’t Trump made it clear that he’s flexible and everything is negotiable? Meanwhile Republican advisors are sketching strategies for a November victory, on the premise evidently that Trump's only problems are his electoral weaknesses.

Michael Gerson, once a speechwriter and policy advisor to George W. Bush, had a one-word description of the scurrying to climb onto the Trump bandwagon: “Disgusting!”

Thank God, Gerson is not alone. More than a few conservatives and true-blue Republicans have declared a principled refusal to support Trump. The principles motivating them are not always clear. Are they principally objecting to Trump’s policy positions (or lack of them)? To his person and past conduct? The principled objections may be mixed and confused. What matters is whether they reflect the conviction that something very basic is at stake, something fundamental to American freedom, democracy, and values. Something even more basic than party policies on tax cuts, immigration, budgets, and Obamacare. Something not to be fixed by the emergence of a “new Trump” or a campaign strategy that can protect GOP seats in Congress.

Liberals and Democrats have a less daunting moral responsibility but a serious one, nonetheless. They should not minimize the gravity of the Trump phenomenon. Or trivialize it by emphasizing the personal over the political. Or mute their opposition because Trump’s criticism of trade agreements, military interventions overseas, and Wall Street, as well as his on-again-off-again interest in a higher minimum wage and other deviations from small-government ideology, appeals to Democratic voters. Nor should Democratic leaders, counting on a Democratic victory, throw their energies into positioning themselves in the administration to come.

Above all, liberals and Democrats must resist the temptation to disparage rather than welcome anti-Trump sentiment among conservatives and Republicans. That sentiment won’t be free of inconsistencies and self-serving excuses. Before Trump became “presumptive,” Robert George and George Weigel penned “An Appeal to Our Fellow Catholics,” signed by over thirty politically conservative Catholics. It urged them to recognize that “Donald Trump is manifestly unfit to be president of the United States.” The appeal was direct and impassioned. From my perspective, it was also marred by a simplistic identification of Catholic social concerns with the Republican party.

But so what? That appeal was written when it seemed that a not-Trump candidate had a slim chance for the Republican nomination. Today its signers and sympathizers, like conservatives and Republicans of every faith and flavor, are being asked to set aside their moral qualms and whatever visceral sense of decency, revulsion, and fear for the nation led them to go on record against the front-runner. This is not the time for liberal gloating over their predicament or chastising them with lectures on “Didn’t we warn you?” and “You’ve made your bed, now lie in it.”

“Better Trump than Hillary!” is now becoming the steamroller slogan. It is advanced as self-evident, no explanations needed.  For principled conservatives and Republicans who recognize Donald Trump as the semi-fascist that he is, the only honest answer to that demand will be: “I will not vote for Donald Trump. I will not support him whatever the cost or the circumstances.  If there is a real chance of a Trump victory, I will vote for Hillary Clinton.”

This is not a matter of preserving Republican seats in Congress or avoiding an embarrassing association with a vulgarian. It is a matter of self-respect, political urgency, and moral integrity.