Seen, Heard & Not Heard at the World Meeting of Families (UPDATED) 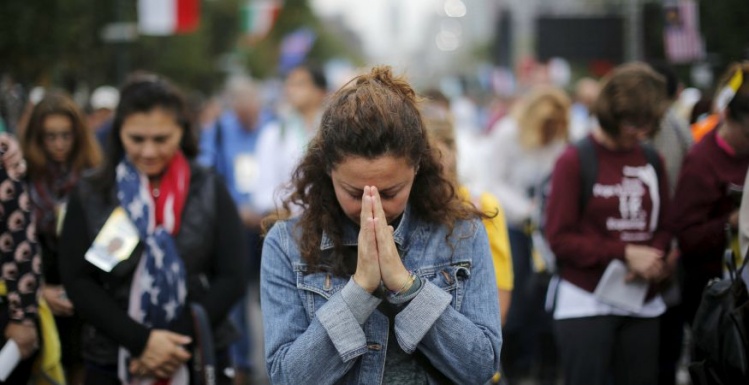 PHILADELPHIA — More than 15,000 people showed up for the World Meeting of Families in Philadelphia this weekend. John Paul II proposed the World Meeting on the Family in 1992, the first was held in 1994, and subsequent meetings have been held every three years since. This year’s was the first to be held in North America.

Although men, women, children, priests, bishops, cardinals, and religious brothers and sisters from all over the world were in attendance, the 15,000 didn’t strike me as representative of the universal church. Conspicuously underrepresented demographics included: the poor, who likely couldn’t afford the time off, the price of tickets, or the cost of travel; the divorced; the infertile; the gay; and women who aren’t mothers, wives, or consecrated virgins. They weren’t just absent physically; their ideas, concerns, and struggles were also missing—or, if present, they were misrepresented through caricature and rhetoric about the truth of the church and the lies of secular society.

I was disappointed, not because I expected otherwise, but because hope is a necessary disposition for those of us who both love and get frustrated with the church—and my hope was misplaced. I hoped for a gesture of relative openness. Call it the Francis effect.

The World Meeting didn’t promise to be a dialogue, though; it promised to be a series of lectures and workshops. The lineup of speakers was probably an effective way to weed out any chance of dissenting attendees, as conservative champions like Christopher West, Robert Barron, Helen Alvaré, Scott Hahn, Greg and Lisa Popcak, and Janet Smith all gave presentations. Perhaps more frustrating than a lineup of expected and theologically aligned speakers was the invitation of non-Catholic (but conservative) leaders like Rick Warren and Elder Christofferson to give their thoughts on the family. It boggles my mind: How did Rick Warren get an invite to a conference covering Catholic views on the family, vocation, sexuality, while someone like Margaret Farley did not? Even if the church doesn’t support her views, she is an intellectually rigorous and ardently Catholic woman committed to deepening and broadening the spectrum of theological thinking in church. She could have been a panel member alongside some conservative counterpart, offering attendees of the conference a fruitful consideration of the effects of particular beliefs or policies.

There is space in the church for dialogue—it is the only church, I think, that is structurally and historically competent to bear diversity. Catholics can trust each other to earnestly desire what is good for the church, for each other, for the common good, and still disagree about how it comes to bear in practice. We don’t abandon the church when things don’t go our way; we dig our feet in a little deeper and, for the sake of the sacraments and the community and the traditions, we fight, learn, compromise, teach, fight some more. Under Pope Francis, conservative clergy in the American church will have to adjust to this just as liberal nuns have had to before. It’s part of being Catholic.

The one-sidedness of the World Meeting was not simply a matter of its demographics and speakers. The entire event was supported by organizations committed to a very specific theological and political agenda. The exhibit hall brimmed with booths for the Knights of Columbus (they were a big sponsor), Humanum—a conference-turned-movement for the promotion of a complementarian theology, and Cana Vox—a group of mothers committed to defending traditional marriage, and several advocates for religious freedom giving away stickers to those willing to call their senators. I saw only one booth for divorced Catholics. I saw no booths for couples experiencing infertility. No booths for women who miscarry. Too many booths featuring attempts at cool Catholic swag. (I walked every aisle of the exhibit hall, but if I missed any that I purport were absent, I’d be happy to be mistaken.)

The slogan of the meeting was “The Family Fully Alive”—a nuanced take on Irenaeus’s ancient remark—and banners hanging throughout the Philadelphia Convention Center featured young and middle-aged couples, some interracial, nearly all with a kid or two or seven. I certainly didn’t scan the conference for every banner, but of the ones I saw, none featured a childless couple. I suspect that the hesitation to represent childless couples (for whatever reason they are childless) has to do with the fear of appearing to support a choice not to have children. The fear of appearing this way has the unintended consequence of ostracizing couples who marry later in life, couples who miscarry, men and women who are infertile, and couples who must or who choose to put their children up for adoption (and these are just the issues relevant to both sides of the political and theological spectrum!).

Though I couldn’t attend every lecture, I read every description in the conference catalog. A lecture on the effects of addiction was to focus on the way prayer, sacraments, and devotions “can bring healing and hope for families struggling with addiction.” (Frankly, I can’t imagine what one could possibly hope to accomplish with an infantile and frustratingly pious prescription to a devastatingly complicated problem.) Another was titled “Supporting the Common Good through Your Purchases and Spending.” Addiction and finances are real issues for Catholic families; are they being dealt with realistically? [Note: Given the constructive insight from Rita Ferrone, I would like to temper my concern about the session on addiction by affirming that prayer, devotions, and sacraments are all integral components, among many others, in the process of healing from addiction and its effects. Please see our exchange in the comments below.]

Nor was I able to attend the only lecture talking about homosexuality in the entire conference (rather than talking against it in passing as the unnamed opposition to traditional marriage or the God-made binary of man and woman), a presentation from Ron Belgau, described in the catalog as “a celibate gay Catholic who embraces Church teaching” and his mother, Beverly. They would highlight “some of the challenges faced by same sex attracted Catholics and their families,” and advocate charity in relationships with “gay or lesbian friends or family members who struggle with or reject Catholic teaching on chastity.” I don’t expect the church to change, or even consider changing, its teachings on homosexuality and traditional marriage. I do, however, expect the church to be a little more diligent and significantly more responsible in representing the struggle many gay, faithful Catholics face.

The final part of my frustration is the simple fact of clericalism. Laypeople are often guiltier of this than the clergy, though it certainly pervades all states of life. I don’t mind a particular reverence for and interest in the varied vocational states the Catholic church offers; I do mind that a conference on the family regularly framed holy marriages as the ones that can produce the most vocations and in which husband and wife live like brother and sister.

St. Gianna Molla was the patron saint of the conference, and although I recognize her as unutterably brave and profoundly holy, it strikes me as problematic to hold her up as the primary model of the modern family woman. Catholicism tends to canonize virgins and martyrs; she wasn’t a virgin, so she got her foot in the door by virtue of her martyrdom. She was a successful doctor who didn’t stay at home with the kids—(hey! that’s interesting! both choices are good choices!)—but we have reduced a multidimensional woman to her stance on abortion, her ability and willingness to bear children, and her death. I really admire Gianna Molla, but the 2,000-year-old tradition of esteeming women for either their fertility, intact virginity, or death is getting tired. Would we know about the genius of Edith Stein if she didn’t take a vow of chastity?

I want to give a fair recap of the World Meeting, not just complain about the conference as a microcosm for the issues the church faces today. There were positives worth mentioning. First, thousands of people wanted to attend a Catholic conference on the family—that’s kind of exciting and unexpected.

Second, there were lots of families—real, live somersaulting toddlers and grandparents in wheelchairs and dads with babies strapped to their chests. Nuns eagerly approached moms after sessions ended to ask to hold the babies. I had lunch with good friends and their three kids; I had dinner with twelve laypeople, a priest, five religious sisters, and three religious brothers. I’m not just being sentimental; it was lovely.

Third, a Mormon, a couple of Protestants, and a Muslim (woman!) were invited to speak.

Fourth, the conference handbook and many of the lectures were presented in more than one language. English, Spanish, French, Portuguese, American Sign Language, Korean, Italian, and others were available as either simultaneous translations or as the primary language for various presentations throughout the World Meeting.

Fifth, in addition to the sessions on addiction and homosexuality, there was at least one lecture on each of the following topics as well: caring for the elderly, caring for the disabled, unemployment, illness, interfaith marriages, blended marriages, divorce, times of separation in marriage (i.e., on military leave), domestic violence, and the environment. Many or all of these topics could have completely been left out without people batting an eye. I am glad they weren’t.