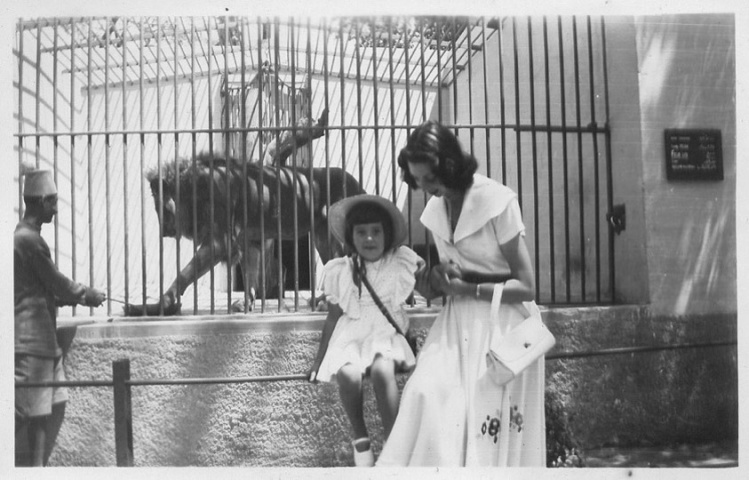 Ilia Warner with Maria Warner at the zoo in Cairo, 1949-50 (Courtesy of New York Review Books)

We’ll start with a pair of shoes. In 1944, a young Italian woman named Emilia “Ilia” Terzulli marries an older English soldier named Esmond Warner. They’re an unlikely couple. Nicknamed “La Giraffa,” Ilia is tall, poor, gorgeous, and untraveled. Esmond is balding, bespectacled, and worldly. She’s not just Italian but southern Italian; he’s not just English but English English, his family’s wealth faded but not their lordly idiosyncrasies. (His mum goes by Mother Rat; his father, a former professional cricketer, by Plum; his childhood pet rat by Scoot.) And so, to make his Bari-born wife feel at home in South Kensington, Esmond buys Ilia a pair of shoes. More specifically, he buys her “bespoke brogues”: sturdy, plain-ish, yet expensive shoes that mark Ilia’s “formal enrolment in the world of the squirearchy, hunting, going to the point-to-point, the harriers, the beagles, the open-gardens scheme, the charity fête.”

We read about these brogues in Marina Warner’s Esmond and Ilia: An Unreliable Memoir (New York Review Books, 432 pp., $19.95). A prolific cultural critic and sometime novelist, Warner calls her book an “unreliable memoir.” It’s a memoir because it obliquely considers how Warner’s sensibility—her cultural leanings, her thinking about books and God and class—have been shaped by the lives of her parents, Ilia and Esmond. It’s unreliable because, Warner writes, it’s “not possible to know your parents or their lives and yours before the age of six” and much of Esmond and Ilia attempts to map this terra ignota: the whirlwind wartime courtship; the family’s relocation, shortly after Warner’s birth, from England to Cairo, where they opened a bookstore; the years in Egypt during which Esmond and Ilia realized they were not just an unlikely pair but “profoundly unsuited to each other.”

Warner stays close to the family archive, quoting from old letters (writing to Mother Rat, Esmond describes his wife as “a greyhound” possessing “the lightest step I ever met”) and presenting us with old photographs. (The slender Ilia looks like a movie star, the nebbish Esmond, with his tweed jacket and owlish glasses, like a New York City trad Catholic ready to hold forth on all that’s wrong with liberalism.) Warner organizes the book around a series of memory-laden objects: one chapter begins with Ilia’s brogues; another with her powder compact; one of the last with a photograph of the charred remains of the family bookstore—burned, along with most British businesses, in the 1952 Cairo Fire. This focus on material objects works well. So too does the use of what the academic Saidiya Hartman calls “critical fabulation”: a scholarly practice that sees the archive as a necessary but partial record to be completed, provisionally and dialectically, by the imagination. In each chapter, Warner grounds us in history and then flies off on the wings of poesy, writing dialogue and rendering psychology like a novelist. 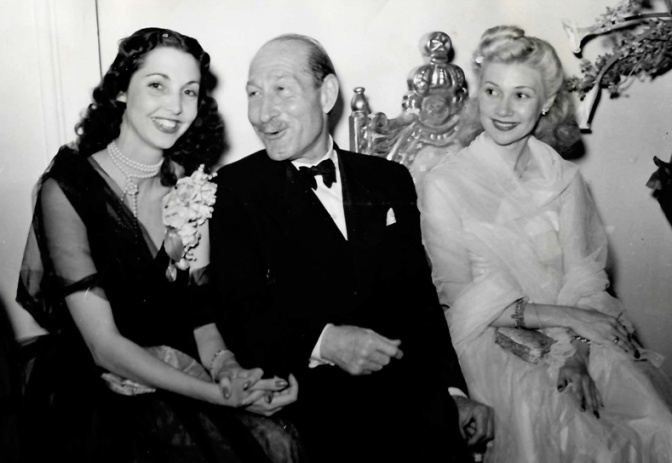 Take the chapter that opens with the powder compact. First, Warner offers a detailed material description: “In a sleeve of blue water silk, the box was a solid mass like an ingot, the gold of the case and the amethysts which framed the image on the lid adding to its bulk.” After making you feel the compact’s heft and see its colors, Warner cuts to imagined dialogue: “‘What shall I do?’ Ilia asked Sadika. ‘It’s so pretty! Do I have to give it back?’” The compact, we soon learn, was a gift from Georges Dimitrino, an Egyptian poet and admirer of Ilia’s; Sadika, a friend in Cairo, encourages the bookish Ilia to flirt but not succumb. (“Let them dangle,” Warner has Sadika say. “Always.”) Warner wanders this way and that, considering Sadika’s own epistolary romance with “a significant figure in the history of Iran” (identified only as H.), leading to a lament: “It is sad but perhaps not harsh to say [Esmond] was oblivious to [Ilia’s] hunger, not exactly for love, but for talking of love and coming to understand better its mysteries.”

There are some mysteries that Warner herself refuses to approach, including Ilia’s love affairs once the family moved back to England after the fires. “It’s not only that it feels sacrilegious to press too far into the private life of your own mother and father,” she writes. “It is also frightening for the same reason, and you shrink away from it. Rather, I shrink away.” What’s most striking is how infrequently Warner shrinks away. She speculates that Esmond’s “falling in love with Ilia cohered with the trust he felt in foreignness.” (Esmond’s father, Plum, was born in Trinidad. Entangled with imperial history, the Warner family knew the complicated allure of the exotic.) And she also speculates on why her mother was so stirred by Dimitrino’s attentions: “It was a double craving, as it happens: for courtship and caresses, for admiration and for igniting manifest desire in others’ eyes, yes. But also, for a world of literature that lay beyond the bookshop.” Esmond and Ilia is a book of desire and its frustrations: the excitement of romance but also its curdling; the archival fever that takes over, that enlivens and maddens the historian.

In her chapter on those status-conferring shoes, Warner walks the reader through the shifting meanings of the word “brogue.” Now, it “means strong lace-up footwear with decorative pouncing or perforations.” In 1537, though, in its first recorded usage, it meant “an escheat; a fraud, a trick.” Warner clarifies that first word: “Escheat is the common law that decrees when someone dies intestate, the Crown can take their property. Severed inheritance is implied here.” Then, she moves forward to the eighteenth century, when brogue meant, according to Samuel Johnson, “a rude kind of shoe” worn in “the wilder parts” of Ireland and Scotland. This leads to another, slightly later meaning of brogue: a rude kind of accent, especially spoken in the wilder parts of Ireland and Scotland. Finally, Warner ties all of these ideas—about footwear, accents, wildness, inheritance—to her mother’s life:

My mother Ilia Terzulli put on her brogues that first year of her marriage when she was at the beginning of the process of acquiring English. But is it possible to learn a brogue and sound like a native the way you can be fitted for tribal footwear? She became completely fluent in the language of her new place of belonging—the language of her daughters—and she soon began to write and think and even dream in English, Italian returning as the default only when she played cards, cast off stitches when knitting, and prayed. But her tune—and the dance of her gestures—were always identifiably Italian, and southern Italian at that.

Ilia—Italian, devotedly Catholic, decidedly unposh—can never fully take on the tune of the English, tepidly Protestant, Eton-educated Esmond. She has her own style; the Warner shoe doesn’t quite fit.

A mood and a pace are difficult to undo—more habits of being that we live through than concepts that we think with.
sharetweet

What of Marina Warner herself? To what extent is her tune inherited from her parents? Warner, who has published dozens of books and writes frequently for the New York Review of Books and several other publications, is too varied a thinker to pigeonhole. But her work often centers on the fantastic: fairy tales, myths, stories of strange adventure and stranger magic. Spending her early years in cosmopolitan Cairo; being the daughter of a bookstore-owning father; hearing about Queen Hatshepsut: surely this had some determining influence on the woman who would write Stranger Magic: Charmed States & The Arabian Nights (2011).

As a child, Warner writes, “I read my way through the books of my father and my grandparents in which the navy, the army, the empire were heroically paraded by the writers I was reading.… They were the authors I loved in my formative years. I don’t remember the stories, just a mood, a pace.” A mood and a pace are difficult to undo—more habits of being that we live through than concepts that we think with. One way to distill the difference between Esmond and Marina: he sought strangeness in a person and place and felt betrayed when they proved resistant to his command; she seeks strangeness in stories and myths and feels exhilarated when they slip her understanding and dwell in mystery.

So much for Esmond. What of Ilia? She was, and remained until her death, Catholic. (Esmond and Ilia concludes with Ilia receiving the Eucharist on her deathbed. The priest hadn’t brought communion wafers, so they made do with Dr. Karg’s 3-Seed biscuits.) Warner has written critically of the Church’s sexual politics in the past. In Esmond and Ilia, she laments that Ilia “was taught a woman’s body is dangerous.… [I]t radiated from her like a fragrance, but it was devil’s work—she was an occasion of sin.” “I have no belief at all in the story of Christian salvation,” she said in a recent interview.

And yet, Esmond and Ilia is a deeply, if ambivalently, Catholic book. We might even call its methodology incarnational: the material is the route to, the embodiment of, the mysterious. Describing several paintings in which a poor woman, Mary Magdalene, carries a precious jar filled with precious oils, Warner writes, “The paintings are telling us that what we are seeing is a miracle, the outer sign of an inward grace.” She continues:

[Mary Magdalene] carries the miracle she is about to take part in—her own conversion through prodigality and love—in the form of a jar, a jar that is usually lidded, since it holds its precious contents safe, and prevents their perfume from being squandered into the air like bottles of expensive scent left unstoppered on a careless diva’s dressing table. (“Always remember to keep your powder compact closed,” Ilia would tell me, “so the lovely, delicate fragrance doesn’t fade.”)

“Call for the lamp,” Warner writes in the prologue. “Hold up the lamp and itemise the things that you know because they belonged to them and through them became part of you.” What are these shoes and powder compacts but relics, holy objects passed down through the ages? And what is Esmond and Ilia but a veneration of them? Critics talk a lot about the Catholic literary imagination. Warner exhibits the Catholic historical imagination. And we all know that many of the best Catholic writers are ex-Catholic writers.