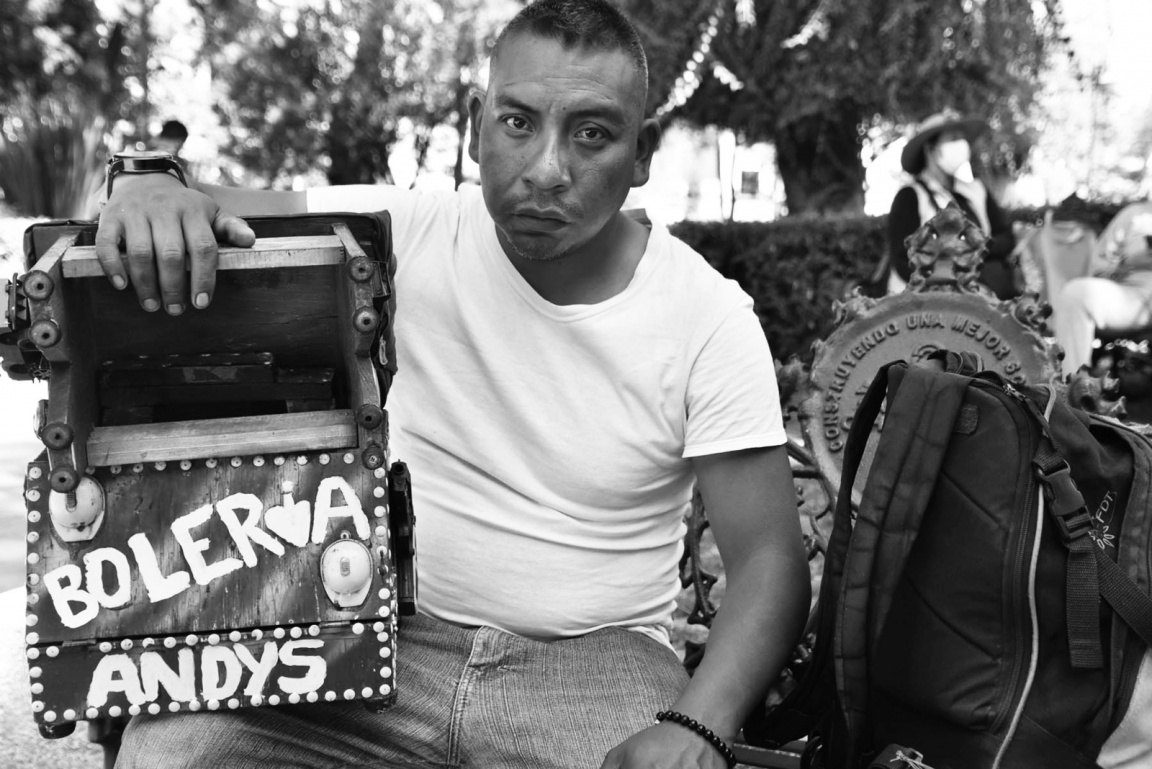 Guadalupe José Medina Tima starts work around 10:30 in the morning, when he arrives with his shoeshine box at a park in Cholula, a small city in the Mexican state of Puebla. On the box is painted the name “Andy,” for his daughter Andrea. Until recently, Medina Tima also worked as a waiter on the weekends, but he lost that job last year when the restaurant closed because of the pandemic. Shining shoes is now his only source of income. “When I worked as a waiter, I earned about 500 pesos ($25) a day” at the restaurant, he said. A shoe-shine costs 25 pesos ($1.25), and Medina Tima told me he used to earn about 500 pesos a day shining shoes before the pandemic arrived. “Now I earn maybe 300 ($15),” he continued. “There are no tourists, so there is no money. It is very difficult.” He’d like to earn 500 pesos a day to support his wife and two young children, but he “can manage” with 300. “But I cannot buy anything extra.”

The Mexican government’s response to the pandemic has been inconsistent and sometimes dangerously negligent. When COVID-19 first took hold last March, Mexico’s president, Andrés Manuel López Obrador (referred to by everyone in Mexico as “AMLO”), denied the importance of mask-wearing, encouraged people to continue hugging, and insisted that the two amulets he carries with him everywhere would keep him from getting sick. (He tested positive for the virus on January 24.) AMLO is not unique in this regard. Luís Miguel Barbosa, the governor of Puebla, said that poor people were immune to the virus. While no one can be sure what effect such statements had on the public’s response to the pandemic, Mexico has the third-highest death toll from COVID-19, surpassing India in January.

The Mexican government has used a “stoplight” system to indicate risk levels, ranging from green (low risk, normal activities, all businesses open) to red (maximum risk, nonessential businesses closed, the rest operating at 20 percent capacity). In early February, thirteen of Mexico’s thirty-two states were at red, two were at yellow, and the rest were at orange—the second highest level. On December 29, authorities in Puebla ordered all nonessential businesses to close and allowed only take-out at restaurants because of “the exponential growth of infections and people hospitalized” in the state. The closure was initially slated to continue for two weeks, but was later extended to a month. To date, there’s been no financial aid to the affected businesses or their employees, most of whom barely eke out a living.

Cholula is a lovely city—its Aztec pyramid, Tlachihualtépetl, is the largest by volume in the world—and its streets are lined with stores, restaurants, and stalls offering traditional food and handmade clothing and objects. These small businesses all depend on tourists to survive. At the beginning of the pandemic, tourism slowly dropped off; now it has all but disappeared. There are no more than a handful of tourists on the streets of Cholula.

A restaurant named La Lunita occupies a corner across from the pyramid. “On weekends, we would have one hundred fifty to two hundred people,” said Antonio Porras Cuevas, the owner and great-grandson of the restaurant’s founder. “Now, none. Maybe ten, fifteen who buy food to take out. Our income is down 90 percent.” Before the pandemic, the restaurant had fourteen employees. Today it has only four. “Maybe the others work in construction,” he said, “but the reality is that there is nothing right now.” 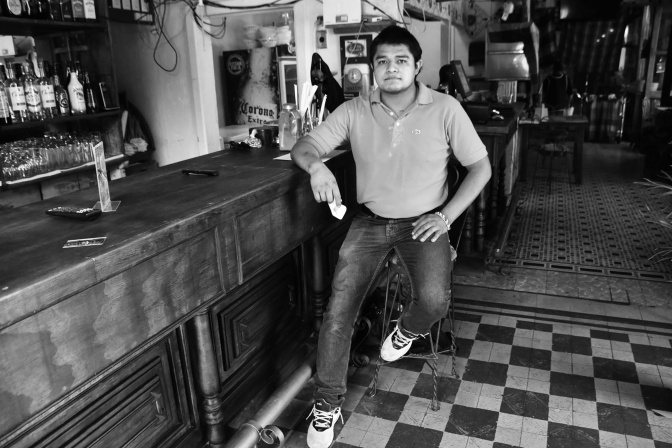 Porras Cuevas paid his employees 1,400 pesos ($70) a week before the pandemic, but since their hours have been cut, they’re earning just half that. Juan Carlos Gutierrez Grande, one of the waiters still working at the restaurant, says that “now, there is not so much from tips. It is primarily from salary.” He lives with his parents and three siblings. “We pool our money. That is how we survive. With everyone working, we can survive.”

Jade Azul, a custom-made jewelry shop, is one of dozens of stores along Avenida Morelos that cater to tourists. “Before the pandemic, I would have eight or nine customers a day,” said Martha Cabrera, the store’s owner. “During the pandemic, maybe four.” Her store, like most along the avenue, was deemed nonessential and closed on December 29. “I survive with Facebook,” she said. “I have a sign on the door with my phone number, regular clients order by telephone and they either pick up the order or I take it to their home. I’m earning much less than half; probably 60 or 70 percent less.” She told me that if the lockdown continues, she’ll have to pay her bills with her meager savings, but “I will not be able to survive for more than three months.” She’s concerned not only for herself. “These stores are primarily for foreigners, tourists, very few Cholulans. Without tourists, Cholula will not survive. It cannot continue without foreigners who have more money.”

Up the block from Cabrera’s store is Jacinta Casa de Diseño, an artists’ cooperative run by Claudia Susana González Leal. The store’s handmade clothes, shoes, and books are supplied by seven families. “The store is their primary source of income,” González Leal tells me. Its earnings had been down 50 percent because of the pandemic; now, with the closures, they’re down 100 percent. “Nobody has money now. They’re all small-crafts people and no one has a website; they don’t know how to build one.” But the artists themselves aren’t the only ones directly affected by the disappearance of tourists. There are also the people the artists employ. González Leal held up a sneaker embroidered by an artisan in Tlaxcala, a nearby state. “She employed five people, now it is only her and she is struggling to survive,” she said. On one wall of Jacinta Casa de Diseño were shelves filled with handmade books. The man who makes these, she said, “had three people working and had to let them all go.”

It’s the same story at stores and restaurants across Cholula—incomes are down, employees are being laid off, and people are beginning to run out of savings.
sharetweet

It’s the same story at stores and restaurants across Cholula—incomes are down, employees are being laid off, and people are beginning to run out of savings. For those lucky enough to still have jobs, reduced hours and fewer customers mean they have to economize. Churrería Las Duyas is a casual restaurant famous for its churros—sticks of fried dough dusted with sugar—and sandwiches. It’s one of several restaurants that line a wide walkway in central Cholula. Before the pandemic the whole walkway was filled with tables and customers; now it’s empty. Las Duyas usually served three hundred people a day, but that number dropped by about half during the pandemic and since the mandatory closures took effect, maybe fifty show up for take out. “I normally had twenty to twenty-five employees a shift, two shifts a day,” said owner Victor Alfonso Aguilar Galeana. “Now, five or six during the day, six or eight at night. Everyone comes in for two, three shifts a week.” José de Jesus Hernández Bonilla, a manager at Las Duyas, worked fifty-six hours a week before the pandemic arrived, and earned 1,600 pesos ($80). Now he works four days a week, eight hours a day, and makes only half the money he made before. His wife works at a small taco stand and her income has also declined. “I would look for other work,” he tells me, “but there is no other work.”

The government has provided loans to small-business owners, but AMLO has been reluctant to do much more than that. There have been no relief checks for unemployed workers, no extension or enhancement of benefits for those who have been impoverished by the pandemic. A growing movement called #AbriroMorir—“Open or Die”—is urging the government to allow stores to open at least partially. “The government needs to let us work,” said Porras Cuevas emphatically. “If there is no work, people will do what they must in order to survive. They will rob, assault, so they can eat.” All the business owners I interviewed reported that there has indeed been an increase in crime. Aguilar Galeana said there had been more robberies and assaults, “more stealing of auto parts.” Several business owners also mentioned “extorción.” “We get two calls a week,” Porras Cuevas told me. “They say, ‘We are a cartel. We want money.’” So far, nothing has happened. “It is probably a local group. If it were a cartel, they would act. There were threats before, but not so continuous. Maybe one every three months.” When Porras Cuevas receives such calls, he hangs up on the caller, informs the police, and lets nearby store owners know. He worries about what could happen. “We are afraid,” he told me. 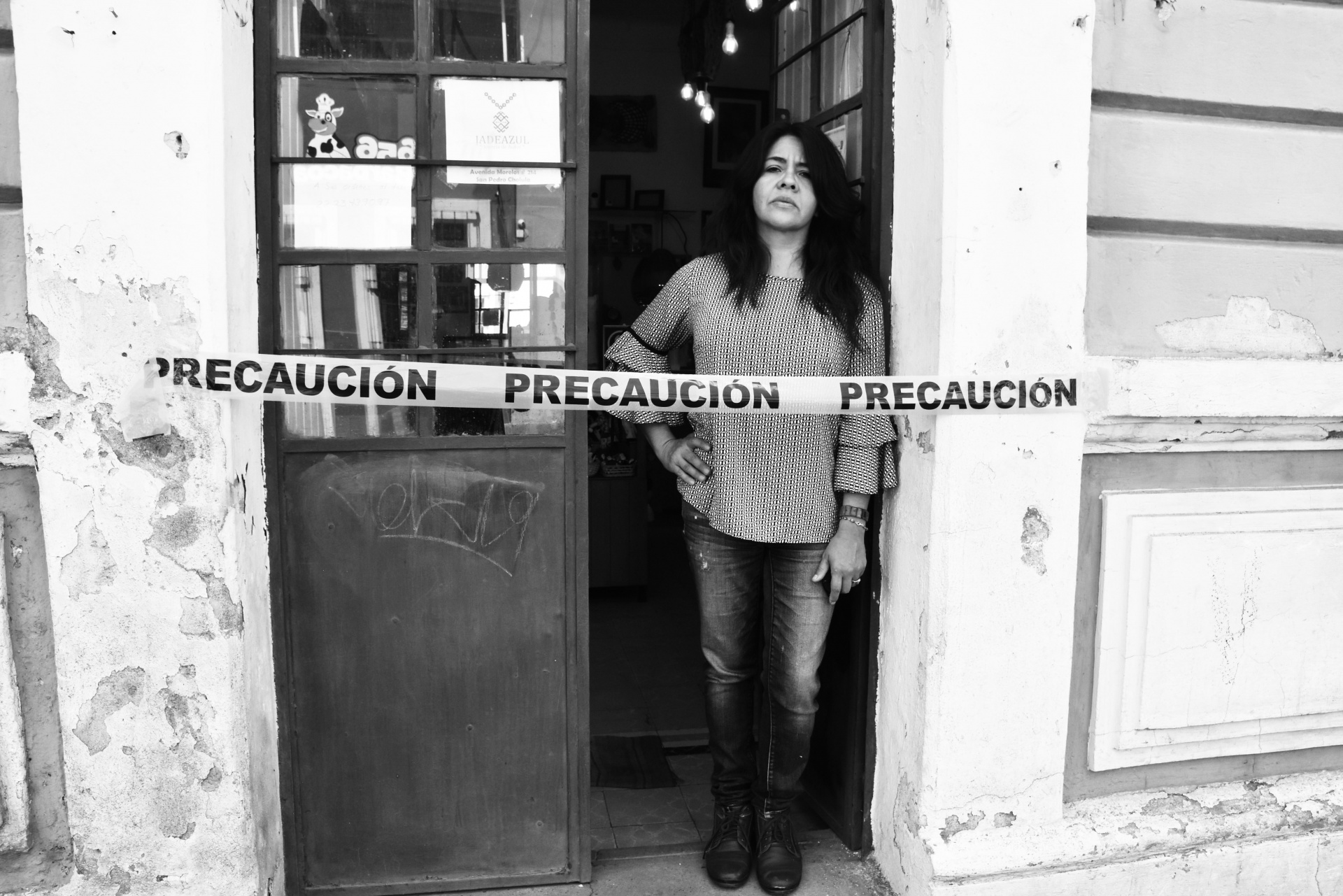 All the store and restaurant owners with whom I spoke say they believe their businesses could reopen safely as long as the proper precautions were in place. “Let us open at 40 percent capacity,” said Hernández Bonilla. “They can come, we can control. We can use hand gel, check temperatures.” What store and restaurant owners can’t understand is why they’ve been forced to close down when other things remain open. “Buses, vans, the markets all have normal capacity,” González Leal pointed out. And those places are all still crowded. “It is a great contradiction.”

Cholula’s municipal government is now considering letting businesses open during the week on the condition that they limit the number of customers, provide disinfectant hand gel, and require masks. They would have to remain closed on the weekends. Restaurants would still be limited to take-out. Whether or not the restrictions are loosened, tourists are likely to stay away until the pandemic is under control.

Medina Tima walks through the park on a Saturday afternoon, carrying his shoeshine box. The park should be jammed with people on a lovely weekend afternoon but it’s almost empty. He walks slowly, stopping to ask every person he sees if he or she would like a shoeshine. While I was with him, everyone politely turned him down. “Sometimes if a person does not want a shoe-shine, they will give me 10 or 15 pesos,” he said. He’ll circle the park until 9:00 or 10:00 at night—eleven or twelve hours total—hoping to earn the 300 pesos he needs to support his family. He confesses it’s difficult to keep going but, he said, “I think of my family, my daughter, and with this, I can continue.”

Although most people in the park, and in Cholula, were wearing masks, Medina Tima himself sometimes does not. He is fatalistic about it. “I am not afraid of the virus,” he said. “For sure, we will all die. We will either die from the pandemic or we will die from hunger.”