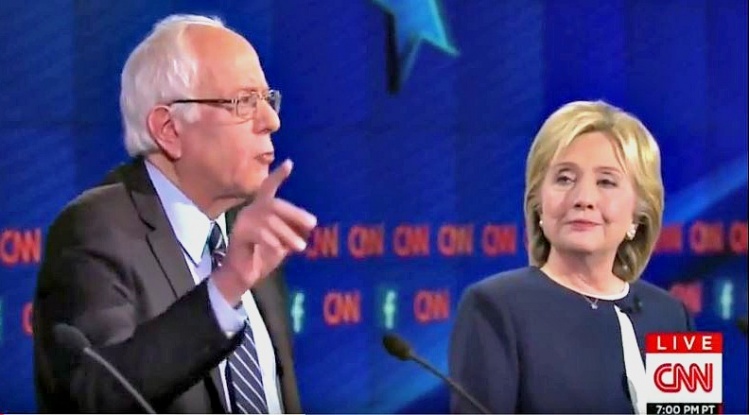 If you weren’t a convinced Hillary Clinton supporter before last night's Democratic debate, her performance shouldn't have made you one.

Perhaps you only caught the last few minutes of it, when Clinton noted that the biggest enemy she made in her public life has been – wait for it – Republicans. (Others gave that honor to the coal industry or the NRA.) Or maybe you noticed, in her closing statement, that Clinton actually intoned the substance-free lines, "If you work hard and do your part, you should be able to get ahead and stay ahead." This after moderator Anderson Cooper asked her if she was ready to take a position on legalizing marijuana (an issue being considered in Nevada, where the debate was held) and she confessed – honestly at least – that she wasn't. Suddenly, it seemed, Clinton had discovered the virtues of federalism! And for those of you who embrace the national security state, Clinton's standing by her Patriot Act vote should be reassuring.

Is it fair to mention these especially unimpressive answers? Not entirely – Clinton did her homework, and was better on the stage than I remembered. I find Hillary Derangement Syndrome puzzling, and don't agree with her more vociferous critics. I understand her political virtues, which are not unsubstantial. But I couldn't really compile a similar list of evasions and poll-tested pablum for the other Democratic candidates. If the word triangulation makes you queasy, all those reminders from Clinton about how the Republicans were so much worse probably weren't reassuring. And I can’t really fathom an informed viewer believing Clinton when she asserted, “I went to Wall Street in December 2007, before the big crash that we had, and I basically said 'cut it out!’” I mean, has a Clinton ever spoken truth to money?

Putting aside the above criticisms, though, Clinton avoided major mistakes.

There didn't seem to be a game-changing moment. The closest was Bernie Sanders's declaration that we should stop worrying about those "damn emails" of Hillary's and get back to the real issues. But even that crowd-pleasing line wasn't at her expense; it was not a blow against her inevitability, nor did it connect with the substantive issues that divide them.

Sanders helped himself last night. My suspicion is that he will get a modest bump from his performance. (I purposely have avoided the insta-polls, focus groups, and spinroom jostling, by the way – these are my impressions, generated only by watching the debate.) He was well-informed, especially on domestic affairs, and appeared more credible as a candidate than some might have expected. Sanders is an earnest wonk—that siren song for magazine editors—but his economic message resonates. There really is a strong contrast between Sanders telling us what (so far as I can tell) he really believes, and the carefully parsed lines Clinton deploys to paper over her ever-shifting positions.

Substantively, the most telling part of the debate was the exchange over “capitalism.” As in, is Bernie a capitalist? Clinton wants to save capitalism from itself; Sanders leveled a more fundamental critique of an economic system geared toward serving the very wealthiest Americans.

This leads to the great difference lurking behind that exchange. Sanders spoke the language of class, and of consciousness raising. He always circled back to the economic dimension of issues, including when discussing race. With Clinton, we heard more of the language of identity (I’m not using that term pejoratively); for example, she emphasized in a way that she didn’t at the start of her 2008 campaign that it was time for a woman in the White House. What we have here are two models of thinking about campaigns and elections. Clinton will check her boxes; she will assemble a coalition; she will reach out to moderates. She hopes to get to 50+1 with the existing electorate. Sanders wants (if you’ll forgive the platitude) to change the way politics is done, and to bring those who perhaps haven’t voted before into this campaign.

May the differences on display last night only grow more distinct in the days ahead.