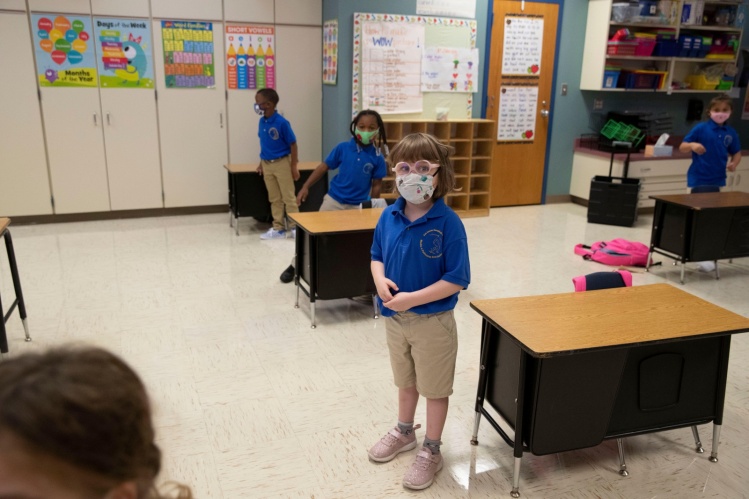 Even after the latest Covid surge subsides, public schools will still face challenges laid bare by a pandemic about to enter its third year. A short list: outdated and overcrowded buildings lacking adequate ventilation; persistent racial and economic disparities that necessitate school-provided services and limit access to remote-learning technology; and a chronic shortage of substitute teachers and other staff, including bus drivers, aides, and nurses.

This is on top of the challenge of getting kids back on track. Evidence of the pandemic’s toll on their mental health and socialization skills continues to pile up. The American Academy of Pediatrics has long warned about the impact of isolation on school-aged children, while educators and economists have expressed concern about the consequences of lost learning on educational attainment and social mobility. Recent data shows that since the pandemic began there’s been a sharp drop-off in applications to public two-year colleges, which are a gateway to steady earnings and economic stability for millions of young people.

A continuing source of exasperation is conflicting and incoherent health-and-safety guidance.
sharetweet

A continuing source of exasperation is conflicting and incoherent health-and-safety guidance coming from the federal government, most recently exemplified by the Biden administration’s January promise to begin shipping 10 million Covid tests per month to the nation’s schools—which educate more than 50 million students—weeks after they would have been most useful. Pandemic politics aren’t helping matters. It’s evident in the mishmash of protocols that vary not only from state to state but also from district to district. It’s also evident in renewed hostility toward unions from the traditional critics of labor on the Right, who play on parental frustration to vilify teachers for keeping schools shuttered. The reality, of course, is not so simple. Classrooms are open across the country, but teachers are coming down with Covid themselves, leading to staff shortages in urban and rural districts alike. When Chicago teachers went on strike in January, they weren’t attempting to hold the city and parents hostage, as some would have it, but simply looking for a reasonable pause and clearer guidelines on health and safety; they were soon back to work. In New York, Mayor Eric Adams abandoned his opposition to remote learning not because of union demands, but because legions of parents have been keeping their kids at home, while students at some of the city’s largest high schools have staged walkouts in favor of suspending in-person classes when infection rates are high. Indeed, research shows that local demographics are a bigger factor than teachers’ unions in whether schools shut down or not.

“Last to close, first to open” is the emerging mantra when it comes to keeping school in session, and it seems at least that most parties are coming around to that position. With time it’s become clear that long-term closure of schools is not an option. But then we need to address the problems magnified by the pandemic. There has to be better leadership and consistency in guidance from elected officials, who must also ensure access to testing and masking while pushing for updates to aging facilities and ventilation systems. Schools should involve parents in crafting contingency plans for keeping classrooms open, and administrators should focus on hiring and ensuring sufficient backup staff and support. All the while, priority must be given to the needs of students—not just access to technology, but also programs for additional instruction, mental health, and social re-engagement. Americans have long professed to value public education, but it took a pandemic to remind us of just how much we need it.