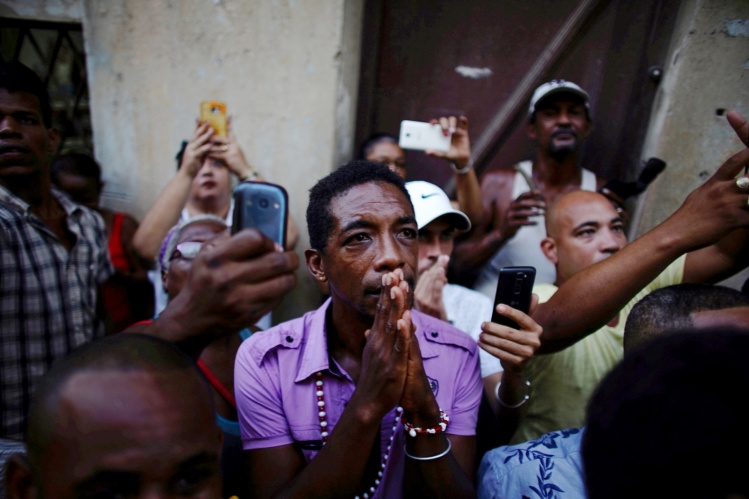 A man prays with other worshippers Sept. 8 in Havana during the annual procession of Our Lady of Charity, Cuba's patroness. (CNS photo/Alexandre Meneghini, Reuters)

For six decades, American foreign policy toward Cuba has consisted largely (though not solely) of unilateral coercive economic measures. Sanctions, in other words, beginning with the Eisenhower administration’s cut on sugar imports to the United States in July 1960 and proceeding on up through the Trump administration, which has taken economic sanctions to unprecedented levels. Although the rationales have varied somewhat over time, the consistent objective has been to deploy U.S. economic power to undermine Cuba’s socioeconomic and political systems and bring about regime change. The State Department’s notorious Mallory Memorandum of April 1960 made it explicit: “The only foreseeable means of alienating internal support is through disenchantment and disaffection based on economic dissatisfaction and hardship.… If the above are accepted or cannot be successfully countered, it follows that every possible means should be undertaken promptly to weaken the economic life of Cuba.”

What is commonly known as the U.S. embargo against Cuba subsequently commenced, in October 1960, when the Eisenhower administration invoked the Trading with the Enemy Act of 1917 to ban all exports to Cuba except medical supplies and food. In 1962, President Kennedy further tightened the screws by prohibiting the import “of all goods of Cuban origin and goods imported from or through Cuba.” In the decades that followed, the United States expanded and reinforced the regime of sanctions against Cuba, by 2007 transforming it into the most comprehensive embargo on any state, according to the U.S. Government Accountability Office. Today, every major method available to a sanctioning state is currently employed: trade control, suspension of aid and technical assistance, the freezing of financial assets, and the blacklisting of foreign companies involved in trade with Cuba. (Then there are the suggested covert actions; as early as 1963, U.S. officials sought to sabotage key sectors of the Cuban economy.)

What has been the impact of this decades-long approach? Back in 2000, a report commissioned by the UN Human Rights Commission noted that “health and nutrition have been two of the primary victims of the sanctions.” It quoted the highly critical report from the American Association for World Health confirming that the embargo led to “malnutrition, poor water quality, and the denial of access to medical equipment and drugs” and amounted to “the deliberate blockading of the Cuban population’s access to food and medicine.” Amnesty International has also documented the effects of the sanctions on economic and social rights, and has repeatedly called for the lifting of the embargo. And though the Obama administration eased certain restrictions following the accords of December 2014, those measures were limited, primarily relating to travel and cultural exchanges. None of the regulatory changes made through executive action affected the core provisions of the embargo established by federal legislation.

Enter Donald Trump, who has not only reversed the modest changes made by the Obama administration, but has also taken the sanctions program to new extremes. The measures imposed by the Trump administration are plainly geared toward bankrupting the Cuban state. They target the country’s areas of economic strength, such as tourism and the export of professional services, and exploit its vulnerabilities, such as its energy dependence and its reliance on direct foreign investment. By undermining Cuba’s economic performance, U.S. sanctions have further degraded the living standards of the Cuban people, who rely on the state for access to health care and education, along with subsidized housing, food, transportation, and utilities. Their plight is worsened by a new cap on family remittances, which limits the amount of money Cubans can receive from family in the United States.

We could have seen it coming. On November 29, 2016, President-elect Trump took to Twitter to threaten a rollback of the normalization efforts made by the Obama administration. Then, in June 2017, he appeared at the Manuel Artime Theatre in Miami, where, surrounded by the most conservative elements of the Cuban-American community in South Florida, he signed the National Security Presidential Memorandum on Strengthening the Policy of the United States toward Cuba. This was the first formal executive action aimed at reversing Obama-era measures. The core of the memorandum identifies sanctions as the tool of choice for dealing with Cuba, by limiting economic interaction with the country, enforcing the travel ban, and formally affirming opposition to calls from international forums to lift the embargo.

Five months later, in November 2017, the U.S. State Department published a list of 180 entities and establishments that U.S. persons could no longer frequent on the contention that they help finance the Cuban military and its intelligence and security services. These included hotels, stores, rum-manufacturing facilities, marinas, and an economic-development zone at the Port of Mariel. That list has since been updated several times and currently numbers 223 entities, including ministries and holding companies. The Treasury Department issued its own set of restrictions on travel to Cuba for educational or cultural exchange groups of U.S. citizens. The latest change related to travel was the elimination of “people-to-people” educational trips altogether, so that outreach and educational visits that don’t lead to an academic degree are no longer permitted, unless with groups organized under the auspices of a licensed travel provider based in the United States. There are still legal ways for U.S. citizens to go to Cuba, but travel is far more severely restricted than it was before Trump came to office.

There was more to come. On March 4, 2019, Secretary of State Mike Pompeo announced that twenty-three years after the passage of the 1996 Helms–Burton Act—which had codified mechanisms for enforcing sanctions and the embargo—the U.S. would activate a clause in the act known as Title III. This allows plaintiffs—both U.S. persons and Cuban-born U.S. citizens—to sue foreign companies that do business on properties nationalized following the 1959 revolution. That April, in Miami, then–National Security Advisor John Bolton announced two more restrictions, each of which targets a critical sector of the economy: visits by U.S. cruise ships and remittances.

Then, in June 2019, the Trump administration further clamped down on travel to Cuba by banning group trips via cruise ships, yachts, and corporate planes. More than 638,000 non-Cuban U.S. persons had visited Cuba in 2018, but that number has since dropped significantly. Analysts agree that Cuban small-business owners, who were enjoying an increase in commerce from U.S. visitors, have been especially hurt. A huge impact will fall on the Cuban private sector, because U.S. travelers, as per U.S. Treasury Department regulations, were more likely to stay at privately owned bed-and-breakfasts and hire private drivers and tour guides. At the end of 2019, it also became far more difficult for Cubans living in the United States to travel home for family visits: the State Department directed the Transportation Department to suspend all commercial flights to Cuban cities other than Havana, effective December 10. This suspension was extended to charter flights effective January 10, 2020.

Travel restrictions have also exerted a humanitarian toll. After a January 2019 tornado in Cuba that killed six people, injured many others, and damaged or destroyed dwellings, Cubans living in Japan mounted a relief effort, raising money and collecting clothing and shoes for donation. The Japanese NGO Peace Boat loaded those items onto the vessel Ocean Dream, which is owned by the Miami-based maritime company Seahawk Corp. But under the new travel restrictions, the aid could not be delivered, and the Ocean Dream, loaded with donations, was forced to return to Japan.

Coercive economic measures imposed in September 2019 are perhaps the most crippling—and cruel—to date. Under the Obama administration, people living in the United States could send unlimited remittances to family members in Cuba. Now that amount has been reduced to a maximum of $1,000 per quarter. Under the Obama administration, Cubans in the United States could also send money to Cubans who weren’t family members, and to charitable organizations; now, neither of these is permissible. This will have an enormous human cost. Approximately 1 million of the more than 2 million Cubans who live abroad, most of them in the United States, send remittances to their families.

Also under Trump, the Treasury Department has further limited Cuba’s access to the U.S. financial system by eliminating authorization for what are commonly known as “U-turn” transactions. These are fund transfers that originate and terminate outside the United States, where neither the originator nor beneficiary is a person subject to U.S. jurisdiction. This will have considerable impact on how Cuban entities, whether private individuals or state owned, conduct their business with trading partners in Canada, Europe, Asia, and Latin America.

It was during 2019 as well that the Trump administration moved to disrupt oil shipments to and from Cuba, while imposing penalties on companies in third-party countries that have commercial relations with it. Such was the case of Italy-based PB Tankers SPA. The Treasury Department specifically cited six of the company’s tankers as having transported oil from Venezuela, including one tanker that delivered oil products from Venezuela to Cuba. (A particular aspect of this action stands out: the attempt to disrupt Cuba’s oil supply coupled with the interest in damaging Cuba’s main ally in the region, Venezuela.) Subsequently, PB Tankers discontinued shipments to Cuba. Soon after that, the Treasury Department lifted sanctions on the company’s fleet, “praising the Italian firm for halting deliveries of Venezuelan oil to the island nation,” in the words of an AP news report.

The action taken against PB Tankers goes well beyond the restriction of trade by U.S. persons; it also goes beyond punishing Cuba’s military and intelligence services, the declared targets of sanctions. Pressuring foreign shipping companies to restrict the import of oil significantly reduces the fuel available for transportation, electricity, and other vital services. But there’s an even more telling example of how the extraterritorial scope of U.S. sanctions is in fact meant to impose hardship on the people of Cuba, a goal first articulated in the State Department’s 1960 Mallory Memorandum. Today, in the midst of a pandemic, as companies and organizations outside the U.S. seek to deliver coronavirus-aid shipments to the island—including ventilators, masks, and testing kits—the U.S. embargo prevents them from doing so.

Raúl Rodríguez Rodríguez is director of the Center for U.S. and Hemispheric Studies at the University of Havana, Cuba.